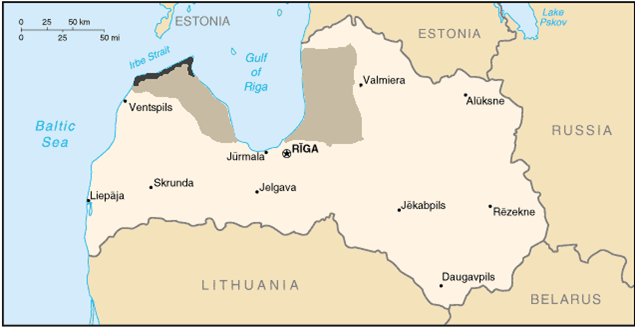 ​We spent some time discussing Baltic geography and linguistics, including the the Livonian language and region. The Livonians, originally speakers of a language related to Finnish and Estonian and thus
non-Indo-European, used to occupy a region west and east of the Gulf or Riga (see the map above, taken from http://en.wikipedia.org/wiki/Livonian_language on 10/5/15). The last native speaker of Livonian is generally now said to have died in 2013 but some people dispute this and attempts to cultivate and preserve the language continue. The area were Livonian was last spoken natively is shown by the black strip on the map.

After the conquest and forced Christianisation of the Livonians by the Germanic Brothers of the Sword, the name `Livonia’ was used for a wider territory comprising southern Estonia and northern Latvia.. This was for over three centuries independent as the `Livonian Confederation’ but in the late 16th century was incorporated into the Polish-Lithuanian Commonwealth, whose borders and main sub-divisions are shown on the map below: the Duchy of Livonia is in grey, the Grand Duchy of Lithuania in plum, the `Crown of the Kingdom of Poland’ in red and the region between Poland and Lithuania was the Duchy of Prussia, which incorporated the present-day Russian enclave of Kalingrad and was a Polish fief. Pat explained that the Russians insisted on retaining Kalingrad/Koenigsburg, despite its undoubted Polish connections, because of its significance as a WWII battle ground 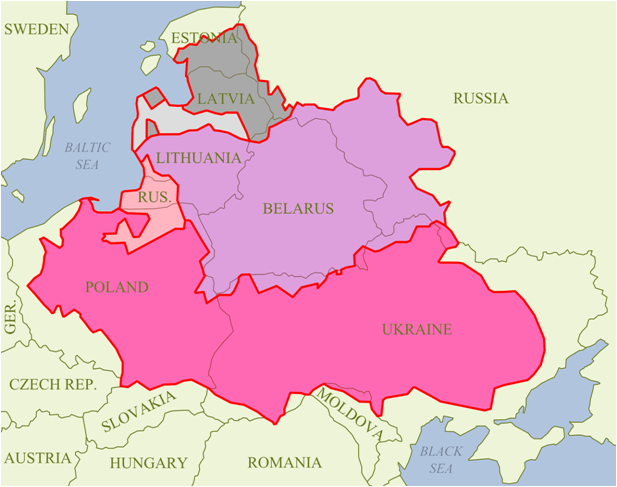 Pat argued that the name `Lithuania’ was derived from `Livonia’, a suggestion which we discussed in October 2013 (see QUESTIONS ARISING (II), p.43) and which John is skeptical about as the Latin Litua for Lithuania is found as early as 1009 A.D. and must be a derivative of a Slavicised form of Lithuanian Lietuva (see http://en.wikipedia.org/wiki/Name_of_Lithuania)

We also talked briefly about the region of Courland, situated in western Latvia between Livonia and Lthuania and originally inhabited by the Curonians, who were also forcibly converted in the early 13th century. The Duchy of Courland and Semigallia (stretching from the Baltic to the border of present-day Belarus) was a semi-independent part of Poland from 1561 to 1795, when it was incorporated into the Russian Empire (see http://en.wikipedia.org/wiki/Courland, from which the map below, with the approxximate borders of the duchy shown in yellow, has been taken) 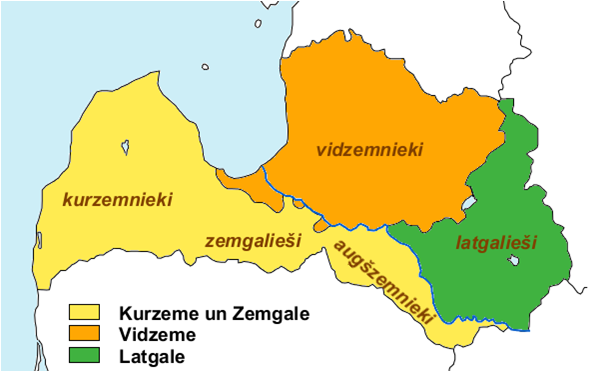 We also touched on the elaborate declension system of Lithuania, and the clear resemblance to Latin, Greek and Sanskrit (see table at http://linguae.weebly.com/circulus-latinus-honcongensis.html ). Austra explained that although it is Latvian which has preserved the major collection of ancient Baltic oral poetry, the present-day Latvian language is less inflected than Lithuanian. This is because Latvian has been in continuous widespread use throughout its history and therefore subject to progressive simplification, whereas Lithuanian was displaced for many purposed by languages of administration such as German, Polish or Russian and so remains more conservative.

POSTSCRIPT, 17/5/21
See http://www.bbc.com/travel/story/20210516-europes-language-that-few-speak for a BBC report on efforts to revitalise the language, which has no true native speakers but around 30 people fluent enough to converse in it,