QUESTIONS ARISING FROM 119th. MEETING – 29/1/21
(the record of earlier meetings can be downloaded from the main Circulus page as can the version of Ciceronis Filius with illustrations added. The illustrated text of Genesis is available on the Genesis page, of Kepler's Somnium on the Somnium page and of Nutting's Ad Alpes on the Ad Alpes page)

The meeting on Zoom was attended by: Valerie, Zhang Wei, Monica, Jennnie, Tanya, Stuart and Sam. John apologized for confusion in his recent message over where we had got to in Ad Alpēs. In December, we had only reached line 108 in chapter XXXII and in today’s meeting we finished the chapter and then read to l.71.in chap XXXIII.

Tan and Sam were eating Basmati food, ferried to them by Keon whose work place is conveniently close to the restaurant. John, who normally gets a takeaway from the Basmati on Sundays, is now using a shot of the restaurant as one of his virtual backgrounds for Zoom. The full menu, with descriptions on English and Chinese of dishes whose names might not be familiar, is available on John’s site at https://linguae.weebly.com/basmati-menu.html
​ 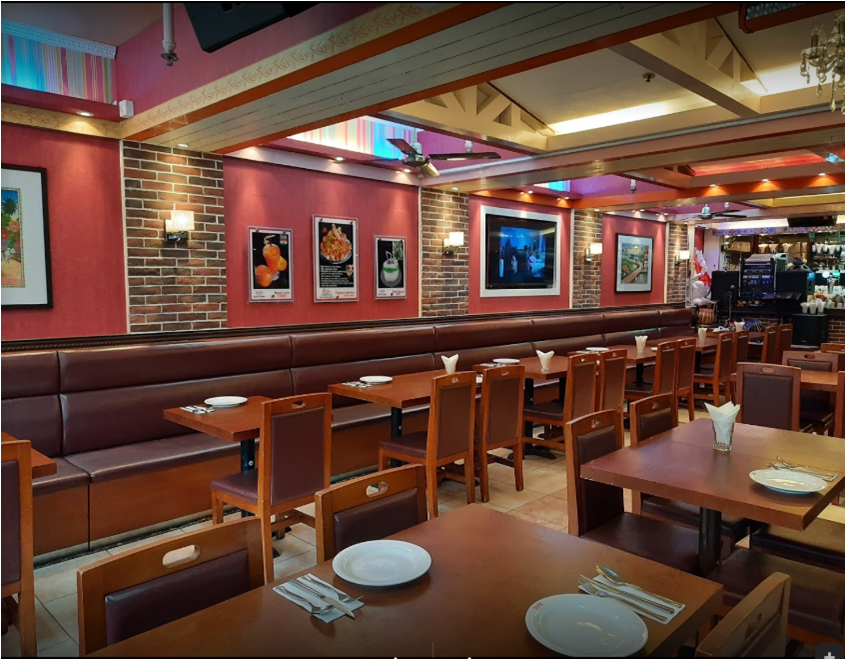 The Basmati with everything you could want except customers

The Ad Alpes text included the story of Orpheus’s descent to the Underworld to ask that his wife Eurydice, who had died just after their marriage, be allowed to return to the world above. The story is told by Ovid in the Metamorphoses (X:1-85) and there is a simplified, prose paraphrase of this in Latin via Ovid (chapter 21). An accompanying PowerPoint is available for download from https://linguae.weebly.com/latin--greek.html in the `Teaching aids for Latin via Ovid’ section.

Orpheus’ request won the sympathy of Pluto, the King of the Dead and his wife Persephone, and mention of them prompted discussion of  the story of the abduction of Persephone (Prōserpina) herself by Pluto. Her mother, Demeter (Cerēs), demanded her return to the upper world and the eventual agreement was that she would spend half the year beneath the earth and half above, her return to the surface allowing vegetation to sprout once more. Sam said there was a dispute over whether her time above was spring and summer or summer and autumn but the former is more likely, both because spring is the time when plants begin to grow and because in some regions `Persephone’ was actually a name for spring itself (see Plutarch’s essay on Isis and Oriris in his Moralia - http://penelope.uchicago.edu/Thayer/E/Roman/Texts/Plutarch/Moralia/Isis_and_Osiris*/E.html)
Like the story of Orpheus and Eurydice, the Persephone legend is included in the Metamorphoses (Bk V, 341-571) with a prose version in Latin via Ovid (Interim Reading IV, pp. 297-300) and a PowerPoint at https://linguae.weebly.com/latin--greek.html

Orpheus for a time won over everyone and everything with his playing on the lyre (lyra), a hand-held instrument that resembled a miniature harp and was a smaller version of the cithara, the word from which `guitar’ derives. Lyric poetry is so called because it was originally recited with notes on the lyre as accompaniment. For more details, see https://en.wikipedia.org/wiki/Lyre 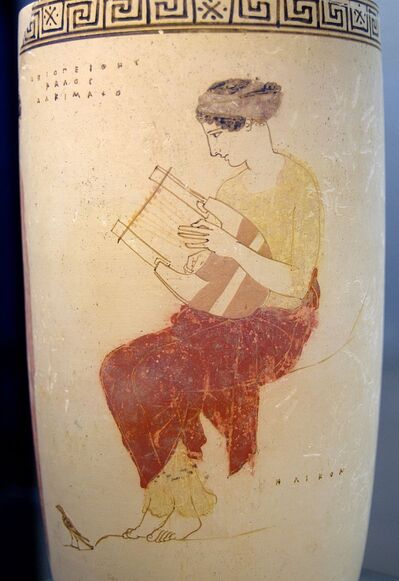 Chapter XXIII of Ad Alpes goes on to give the story of Aeneas’s descent to the Underworld under the guidance of the Sibyl, as told by Virgil in Bk 6 of the Aeneid, part of which is a set text for this year’s IGCSE Latin exam. Virgil’s story was modeled partly on Homer’s account of a similar trip undertaken by Odysseus and, on the basis of these detailed narratives, we can construct a map of the Underworld as the ancients conceived it. Within Pluto’s realm there was a place of punishment for those who had been particularly evil and also the `Elysian Fields’, where the virtuous enjoyed their reward.

The souls of the dead were ferried across the River Styx by Charon, whose name has to be pronounced with a hard `ch’ (as in chemistry). The Greeks and Romans placed a coin in the mouth of a dead body, believing that this would be needed by the dead to pay Charon their fare. Charon, like Hermes/Mercury and the Hindu god Yama, are described by the Greek term psychopomp – conveyor or guide of dead souls.

The name Plūtō, though it became very common in Latin, is in fact, like Hades (ᾍδης) is from Greek (Πλούτων). The original Roman name for the ruler of the dead was Dīs Pater, the first word having originally referred to any deity but then exclusively to Pluto. This semantic shift may have occurred because Latin dīs was also used as an equvalent of dīves (rich) and Greek Πλούτων (Plūtōn) is connected with ploútos (wealth). The Greeks seem to have connected the wealth and the ruler of the Underworld because precious metals are found buried in the earth.

We discussed the origin of the word suffer which John thought was probably Germanic but which is actually from Latin subferre (to bear from underneath). This is a warning that although basic words in English are more often than not Germanic, this is not always the case. There is a story about a 19th century professor who had a great hatred of the Romance (Latin and French) element in English and strove to speak as if the 11th century Norman Conquest, which opened the floodgate to these new words, had never occurred. He therefore never spoke of the `impenetrability of matter’ but only `the unthroughfaresomeness of stuff.’ He was then told that though `stuff’ may have derived from Old High Germanic stopfon (plug, stop up), this itself came from Latin stuppa (< Greek στυππη) meaning coarse linen. Utterly devastated, he promptly yielded up his spirit to the old Teutonic gods. His death may, however, have been premature as some other scholars think that stopfon was from a native Germanic root.

We finally considered whether `suffrage’ (the right to vote) was etymologically connected to `suffer’.The connection is actually only in the first syllable (suf < sub) as the main part of the Latin suffrāgium is from frāgor (shout (in support)) or frangere (break (a piece of tile to vote with)).

NOTES
[1] Literally `with foot deceiving [her]’
[2] Like several other impersonal verbs, paenitet takes the accusative of the person feeling the emotion and genitive of its cause or object.
[3] In prose a prepositional phrase (in locō idoneō) is more usual than this plain ablative.
[4] This is an indirect reflexive, referring back to the subject of the main clause (Sextus) not to the subject of the dependent clause (Drusilla).
[5] The story of Orpheus is told in Book X, ll 1-85 of Ovid’s Metamorphoses and summarised in prose in chapter XXI of Latin via Ovid. A PowerPoint illustrating the chapter can be downloaded from the `Teaching aids for Latin via Ovid’ section of https://linguae.weebly.com/latin--greek.html
[6] Literally `if by chance’
[7] The words are from Cicero, Tusculanae disputationes,1.48, and he is often assumed to be quoting from Andromacha, a play by Ennius (c.239-169 B.c.). However, Cicero does not name his source and Varro (Lingua Latina, 7.6), who does make this attribution, quotes rather different words. See Brill’s Companion to Roman Tragedy,pp. 18-19, https://books.google.com.hk/books?id=x8VWCgAAQBAJ

NOTE
[1] Tantalus, the great-grandfather of Agamenon and Menalaus, stood in a pool whose waters receded whenever he bent down to drink, while the fruit hanging above him moved upwards whenever he tried to reach it. This was punishment for his having served his own son, Pelops, as a meal for the gods to test their omniscience (see https://en.wikipedia.org/wiki/Tantalus). Ixion revolved eternally on a wheel of fire after he attempted to seduce Hera (see https://www.ancient.eu/Ixion/)..

NOTES
[1] Acheron was the name both of a real river in western Greece and of one of the five, interconnected rivers of Hades (or Orcus), the others being the Styx, Lethe (`River of Forgetting’), Phlegethon (`River of Burning’) and Cocytus (`River of Lamentation’). Further details at https://www.thoughtco.com/five-rivers-of-the-greek-underworld-118889
[2] Virgil, Aeneid, 6:126-8. Dis is another name for Pluto/Hades. Both Virgil and Ovid place the Sibyl near Cumae and Lake Avernus (Lago Averno) at the north end of the Bay of Naples but Servius, the 4th century Virgilian commentator, links the story of the golden bough with the cult of Diana Nemorensis and the fugitive slave priest by Lake Nemi in the Alban hills over 100 miles to the north (see chapter 23 above). No other ancient source mentions the bough in connection with the Nemi shrine so Virgil might have been drawing upon an entirely separate, purely Cumaean legend or on his own imagination for this motif. For a full discussion of the Nemi cult and the text of all the original sources see C. Bennett Pascal’, ‘Rex Nemorensis’, Numen 23:1, 23-39, https://www.jstor.org/stable/3269555.  Aeneas’s meeting with the Sibyl is described in Book XIV of the Metamorphoises, and summarised in chapter XXI of Latin via Ovid, with PowerPoint at https://linguae.weebly.com/latin--greek.html