QUESTIONS ARISING FROM 125th. MEETING – 28/7/21
(the record of earlier meetings can be downloaded from the main Circulus page as can the version of Ciceronis Filius with illustrations added. The illustrated text of Genesis is available on the Genesis page, of Kepler's Somnium on the Somnium page and of Nutting's Ad Alpes on the Ad Alpes page)

The regular meeting was preceded by a session using Orberg’s direct method textbook Lingua Latina Per Se Illustrata: Familia Romana, which was organised by Eugene, with Tanya, Sam, Ollie, Kay and Jesse also participating and Keon joining them to eat. Later arrivals were Zhang Wei, Stuart, Lily, Monica, Chris Coetzee, who was attending after a long absence, Luisa and John.

Food consumed included batātae cum brassicā Pompēiānā (alu gobi), spīnachiā cum caseō (saag paneer), squillae arōmaticae (prawn masala) orȳza arōmatica (biryani), agnīna acerrima (lamb vindaloo), iūs lentium (daal), cicera arōmatica (chana masala) with the usual pain orȳza and pānis Persicus (naan). This was washed down with vīnum rubrum, whilst one member drank oxygalactīnam  (a yoghurt drink) and another cervisia (beer)
Lily asked what the connection was between Pompeii and the cauliflower, for which the usual Latin name is brassica Pompēiāna. This term was discused at the October 2018 meeting and its history set out exhaustingly, if not exhaustively, at https://linguae.weebly.com/conventus-oct-2018.html, to which the masochistically inclined are referred. For the rest, a brief summary is offered here.
​
The term brassica seems to have referred to any variety of the Linnaean species Brassica oleacea, which covers cauliflowers as well as brussel sprouts, broccoli and kale. However the modern cauliflower was probably not known in classical times and the word Pompeiānum, used by Pliny the Elder (Naturalis Historia, 19.41) in the 1st century A.D., seems to have referred to a type of kale. The Dutch botanist Rembert Dodoens, whose 1554 Cruydtboeck (`Book of Herbs’) was a standard reference across Europe for two centuries, appears to have misunderstood the Roman author and adopted brassica Pompeiāna as the name for the cauliflower. Because this misnomer has been sanctified by centuries of neo-Latin usage, it seems best to retain it, rather than adopt alternatives such as cauliflōra, caulis flōridus (`flowery cabbage’) or brassica botryōdēs (`cabbage shaped like a grape-cluster’).
​ 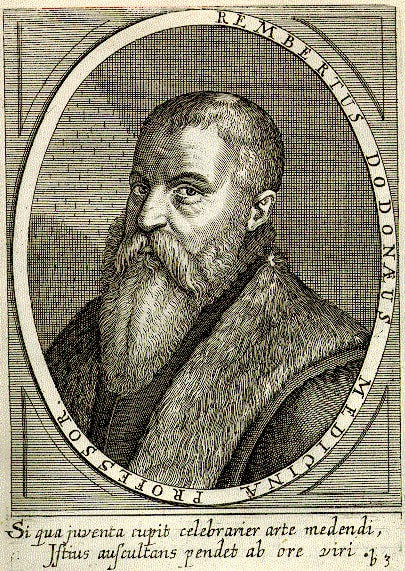 To encourage use of Latin during the meal, the following phrase list was distributed. The handout  itself (latin_at_table.doc), together with other vocabularies prepared by Eugene, can be downloaded from https://linguae.weebly.com/circulus-latinus-honcongensis.html Note that the nouns are given in their accusative form to fit into the sentence frameworks given at the start.

There was some confusion over the reading from Ad Alpes because John had mis-read his record file, presumably looking at his email after the May rather than the June meeting, and recently told people we would be reading from, the start of chapter XXXVI. We had in fact already got to XXXVI.113 and we read from there to line 10 in chapter XXXVII.

This section included an account of Hannibal’s victory over the Romans at the River Trebia, a south bank tributary of the Po, in December 218. The conventional interpretation of the ancient sources, illustrated by the map below, is that the main Roman force was encamped to the east of the Trebia , crossed the river to attack the Carthaginian infantry but were then attacked from behind by the enemy cavalry, after which around 10,000 Romans were able to break through the enemy lines and to retreat to Placentia (modern Piacenza). The problem here is that breaking out of the encirclement in this way would have left the main Carthaginian force between the Romans and Placentia (modern Piacenza). One scholar has tried to remove the difficulty by arguing that Placentia was originally situated west of the Terebia and only later rebuilt in its present situation. Some of us thought that the Romans must have broken out by turning round and fighting their way through the cavalry but the use of the word aciēs (battle line) would normally imply an infantry array rather than horsemen. For more details of the campaign and links to futher infomation see the footnotes to the Ad Alpes extract below, 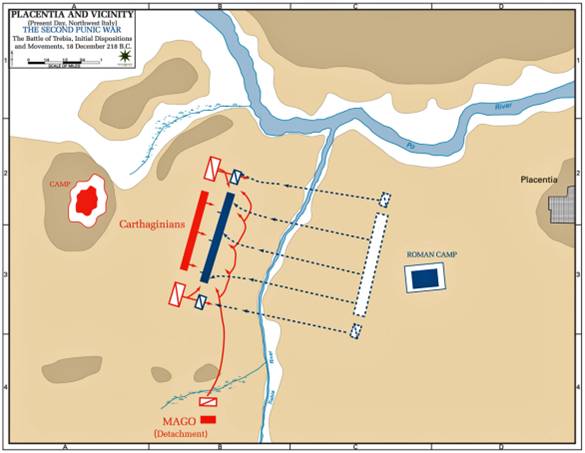 There was a brief discussion of how to translate a rather long T-shirt slogan that Ollie had devised:`We are all meat bags but some bags but some of  us know Latin.’ This could perhaps be rendered Omnēs saccī carnis sumus sed aliqui nostrum Latinam scīmus.

Luisa suggested that for a future meeting we might look at Historia Langobardorum, an account by an 8th century writer, Paul the Deacon,.of the history of the Lombards, a Germanic people who conquered most of Italy in the 6th century and gave their name to the Lombardy region. A PDF of the work was subsequently sent to all Circulus members and a copy can also be downladed from https://www.documentacatholicaomnia.eu/04z/z_0720-0800__Paulus_Diaconus__Historia_Langobardorum__LT.pdf.html

We also briefly considered between Mao and other leaders, Zhang Wei suggesting he could be compared with China’s own First Emperor as well being, in Russian terms, a combination of Lenin and Stalin.
​
In addition, we discussed a number of well-known Chinese phrases, including天下大勢, 分久必合, 合久必分 (`Under heaven [there is] great tendency – a long period of division is followed by unity, a long period of unity by division. This sentence, from the introduction to the 14th centrury historical novel Romance of the Three Kingdoms (三國演義), encapsulates a recurring pattern in Chinese history. John uses it in his INTRODUCTION TO LATIN to highlight the contrast with Europe, where, although, as in China, there is a substantial degree of cultural unity, in the political sphere disunity has been the norm since the fall of the Roman Empire. Chris is currently planning to include the novel in his teaching and is reading both an English translation and the original Chinese.. He was surprised by how popular the book was in many parts of Asia beyond China, and Zhang Wei said that this was particularly true of Japan, where the book was drawn upon for things like anime productions. 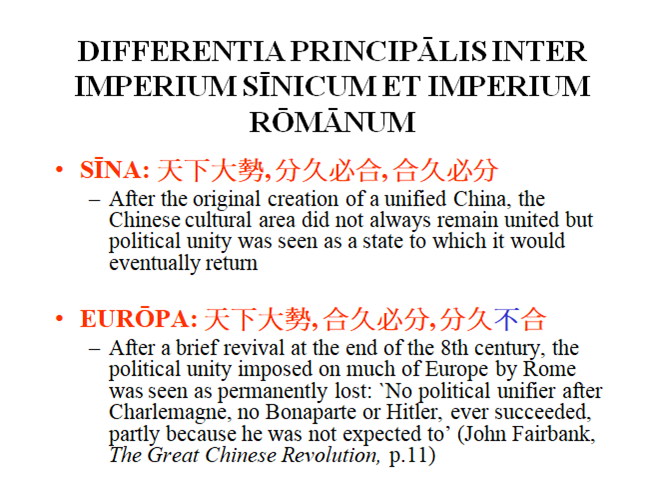 Another very useful saying is 一講曹操, 曹操就到 (yāt gong Chouh Choū, Chouh Choū jauh dou , `Speak of the devil!’). His account of how this was indelibly impressed upon his memory over 20 yeats ago at CUHK can be read at https://linguae.weebly.com/conventus-sep-2019.html

The final phrase discussed was神憎鬼厭 (sàhn jàng gwaí yim, `gods hate, ghosts detest’), used to describe something truly abominable. John finds this comes in very handy when referring to his own pronunciation of Cantonese
Chris, who also revealed that he had read all of Cicero’s extant works, whilst working on his thesis on the author, is currently engaged in setting up a primary and secondary school with flexible teaching methods to match individual’s learning styles. His now being his own master is good news for us as it is again possible for him to attend Circulus meetings.

NOTES
[1] From its context and use in a clause of fearing, incideris is clearly perfect subjunctive, not future perfect. The alternative form, inciderīs, which is unambiguously perfect subjunctive, is the older one and was sometimes used in poetry in the classical period but the vowel was regularly short in ordinary conversation.
[2] A mūnicipium was a self-governing urban centre whose inhabitants had some or all of the rights of Roman citizens. After Caracalla extended Roman citizenship to all free inhabitants of the empire in 212, the term simply meant a town with its own local government.

NOTES
[1] Although the city was indeed quickly rebuilt, it probably never returned to its full former prosperity.
[2] The battle was fought in November 218 B.C. north of the Po by the river Ticinus (now the Ticino), near the town of Ticinum (modern Pavia). The Roman commander, Publius Cornelius Scipio had to be rescued by his son the future Publius Cornelius Scipio Africanus, who was to defeat Hannibal decisively in Africa at Zama in 202. See https://en.wikipedia.org/wiki/Battle_of_Ticinus
[3] Tiberius Sempronius Longus, Scipio’s fellow consul for 218, had to travel north from Sicily, where he had been campaigning when news of Hannibal’s arrival in Italy was received.

NOTES
[1] The movements of forces before and after the battle and the location of camps are uncertain: see the complex account at https://en.wikipedia.org/wiki/Battle_of_the_Trebia Many of the Gallic inhabitants of the Po Valley, resentful over the colonies that the Romans were establishing in the region, went over to Hannibal and Scipio had had to withdraw to the hills south of Placentia. When Sempronius arrived he apparently pitched his own camp nearer the Po but it is unclear whether all of Scipio’s forces joined him there and whether this camp was on the east bank of the Trebia, as assumed at https://weaponsandwarfare.com/2015/11/14/battle-of-the-trebia-river/ In addition to the ten thousand Roman troops (out of a total force of around 40,000) who broke out of encirclement and reached Placentia, Scipio may have still had a separate force of his own, which would explain why he had one army to put in winter quarters at Placentia and another at Cremona. It has also even been suggested (at https://www.jstor.org/stable/296005) that Placentia itself was originally west of the Trebia!

NOTE
[1] Comum (modern Como), formally known as Novum Comum as it was founded by Julius Caesar in 59 B.C. to replace an earlier hilltop settlement, is situated at the south-west end of Lake Como (ancient Larius Lacus), near the modern Swiss border. It was the birthplace of Pliny the Elder (c 23-79 A.D.) and his nephew, Pliny the Younger,(c.61-113 A.D.) whose benefactions to the city are recorded in a famous inscription. See https://comocompanion.com/2017/02/28/novum-comum-roman-como/ for details of the city’s Roman heritage, and also https://en.wikipedia.org/wiki/Como