QUESTIONS ARISING FROM 116th. MEETING – 21/10/20
(the record of earlier meetings can be downloaded from the main Circulus page as can the version of Ciceronis Filius with illustrations added. The illustrated text of Genesis is available on the Genesis page, of Kepler's Somnium on the Somnium page and of Nutting's Ad Alpes on the Ad Alpes page)

At a Zoom session attended by Valerie, Tanya, Sam, Stuart and John, we read chapter 30 of Ad Alpes (see below), which included material on Rome’s early battles to win mastery of Italy.
We discussed briefly the pontificēs, state priests whose name literally meant `bridge builders’. The number was increased over time, possibly reaching 25 under Augustus (see https://en.wikipedia.org/wiki/College_of_Pontiffs ) and the College of Pontiffs also included other categories of priest and the Vestal Virgins,
Also touched on were the various Latin words for `kill’. Students are normally introduced first to necō, which, as a first conjugation verb, is the simplest but is in fact less common than interficio (`do away with’) and occīdo (`cut down’). In addition, necō tends to be used where death is caused without visible violence (e.g. by starvation or poisoning).
We noted that ēgregius (literally `out of the herd’) in Latin normally meant outstandingly good. The English derivative `egregious’ normally implies `outstandingly bad’ , having originally had a similar meaning to the Latin but acquired the modern connotation in the 16th century through being frequent ironical use.
There was also discussion of early Australian history and the claim that Aboroigines had actually developed agriculture. Evidence for this is available at in the journals of early European explorers and is presented at http://www.australasianscience.com.au/article/issue-july-august-2010/evidence-indigenous-australian-agriculture.html and https://www.abc.net.au/radionational/programs/archived/bushtelegraph/rethinking-indigenous-australias-agricultural-past/5452454 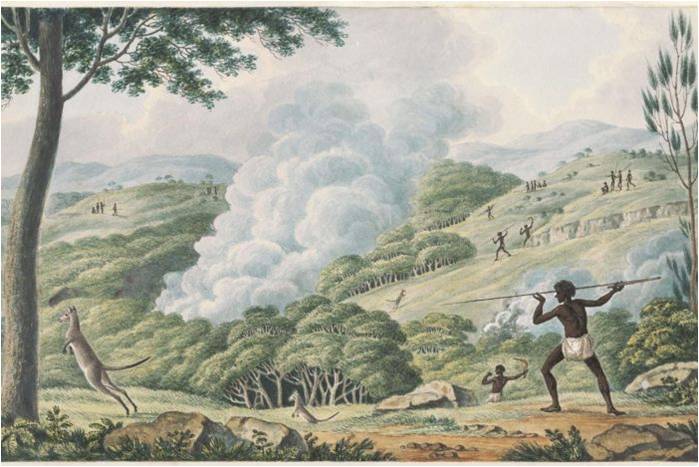 Aborigines using fire to hunt kangaroos by Joseph Lycett, approximately 1775-1828
​
Tanya also claimed that the earliest bread in the wotld has been discovered in Australia. A check with Wikipedia suggests that the evidence is grinding stones from both Australia and Europe, which may or may not have been used for making bread. The discovery of actual charred bread crumbs at a site in Jordan (the Middle East, not Kowloon!) suggests bread was being made from wild grains between 14,600 and 11,600 years ago, but bread from cultivated plants was not made until early in the first millennium B.S. See https://en.wikipedia.org/wiki/History_of_bread and
https://en.wikipedia.org/wiki/History_of_agriculture

The Ad Alpes chapter included Cicero’s translation of Simonides’ famous epitaph on the Spartan dead at Thermopylae in 480 B.C. The original literally means `Stranger, tell the Spartans that here we lie, obedient to their commands’. John note how the present participle suggests obedience and loyalty continuing even in the afterworld and hecontrasted this with the rendering bu one English translator `We took their orders and are dead’ which loses this nuance and seems almost like a reproach to the living.

We also noted that Cicero’s own poetry, little of which has survived, is not highly regareded. Particularly derided is a line from his poem on his own consulship – Ō fortūnātam nātam mē cōnsule Rōmam (`O fortunate Rome, reborn with me as consul!’). Cicero’s boasting about his own achievements prompted the comment from a later Roman author, Seneca Younger: `He praised his own achievements not undeservedly but unterminably’ (nōn sine causā sed sine fīne). Seneca’s evaluation is discussed in detail by F.X. Ryan in a paper available at https://www.academia.edu/14536483/Anent_Cicero_Praising_His_Consulship_sine_fine

Simonides Greek original is given in the footnotes below and this prompted mention of the problems connected with pronouncing the language today. Most scholars produce the individual sounds as we believed was done in the 5th century B.C. rather than as they have become in modern Greek, though the latter system is used in Greece itself today and also in many seminaries teaching New Testament Greek. In Britain, however, following the recommendation of a 17th centuy Oxford-based Dutch academic, it is customary to stress ancient Greek words as if they were Latin (i,e stressing a long penultimate and stressing the antepenultimate if the penultimate is short.). In other countries the stress is more rationally placed on the syllable that bears the written accent in both anceint and modern Greek, the postion of this having remained the same though the accent itself changed from a pitch to a stress one in the first millennium A.D. there is a discussion of this strange situation in Allen’s Vox Graeca, available for down,load at https://www.scribd.com/document/59158460/Allen-W-Sidney-Vox-Graeca-the-Pronunciation-of-Classical-Greek and elsewhere.

For a modern Greek reading with stresses in the right place and vowels and consonants as we believe Homer would have pronounced them, there is a recitation of the opening lines of the Odyssey embedded at https://linguae.weebly.com/res-graecae.html, which also has other audio links. 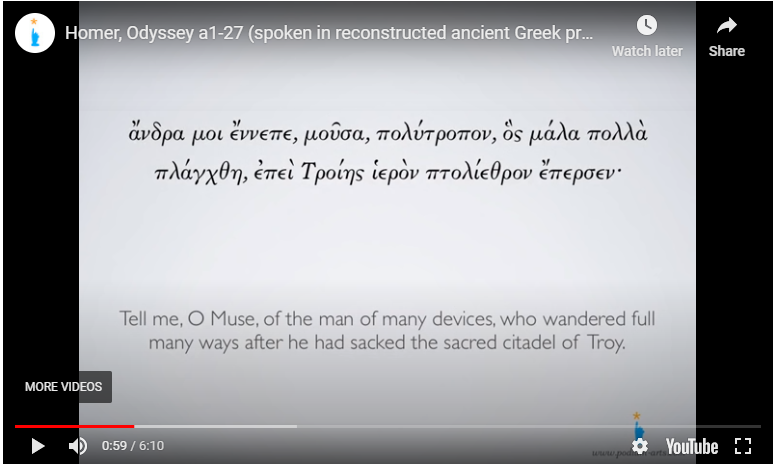 Learning Greek is a more difficult taks than learning Latin because a much smaller proportion of the words are similar to English ones. Listneing to the language is therefore a more `alien’ experience than listing to Latin. For this reason, it was decided in Mel Gibson’s film `The Passion of the Christ’ to let Pontius Pilate and Jesus converse in Latin rather than Greek, because the latter, though more authentic, would not have have been distinguishable from the Aramaic (the Jewish vernacular at that time) which is also used in the film.

Finally, for some reason or other, there was a brief discussion of the Latin for `cockroach’. The word is blatta, but this covers also any other inscect which shuns the daylight.


[1] The short `o’ in the printed book is an error.
[2] The battle of Sentinum was fought in 295 B.C. when the Romans were facing a coalition of the Samnites, Etruscans, Umbrians and Senones (Italian `Senoni’), the Gallic tribe then occupying the east coast south of Ariminum (Rimini), who had captured Rome itself in 390. After the Roman victory, made possible because the Umbrians and Etruscans were defending their own territory against diversionary attacks, the Samnites were abandoned by the other peoples and were themselves then finally brought under Roman control See https://en.wikipedia.org/wiki/Battle_of_Sentinum, https://www.livius.org/articles/place/sentinum/


NOTES
[1] This construction with fore ut and the subjunctive was normally preferred in indirect statements to the use of the `future passive infinitive’ (hostium sīc minūtum īrī impetum, Rōmānīs ..vīrēs paene integrās servātum īrī)
[2] Publius Decius Mus’s father of the same name sacrificed himself in an identical manner at the Battle of Vesuvius in 340 B.C. when Romans and Samnites were allies in the Latin War of 340-338 against both the Latins themselves and the, Campanians, Volsci, Sidicini and Aurunci, peoples occupying the west coast of Italy from Latium to the Bay of Naples (see map on pg.19). Roman victory in 340 ensured her domination of Latium, as victory at Sentinum in 295 paved her path to supremacy in Italy.


[1] Lictors carried fascēs, an axe in a bundle of rods, as a symbol of the consul’s power to punish.


[1] The `Lacus Curtius’ (`Lake of Curtius’) was in historical times a small, duodecagonal basin, apparently all that was left of the marsh (and possibly once a real lake) that had existed before the Forum area was paved over in the seventh century B.C. As well as the devōtiō story, conventionally dated to 362 B.C, which he himself prefers, Livy mentions a rival ancient explanation linking the name  to a Sabine leader, Mettius Curtius. This man supposedly became stuck in the marsh during the fighting after the Romans’ abduction of the Sabine maidens. The gēns Curtia were in fact of Sabine origin but both legends may be distorted memories of the area’s probable early function as a site for execution and human sacrifice. The emperor Galba was lynched by soldiers at this place in 69 A.D. The relief shown on pg. 21 is in the Capitoline Museum. See for a third legend and further details https://www.livius.org/articles/place/rome/rome-photos/rome-forum-romanum/lacus-curtius/
[2] Cicero’s translation of Simonides’ Greek original:  Ὦ ξεῖν', ἄγγειλον Λακεδαιμονίοις ὅτι τῇδε
κείμεθα, τοῖς κείνων ῥήμασι πειθόμενοι. (`Tell them in Lacedaimon, passer-by, that here, obedient to their word, we lie.’)  The verses are an elegiac couplet (i.e. a hexameter plus a pentameter; see note ?? to chapter 25). The epitaph commemorates the three hundred Spartans who held the narrow pass on the coast road at Thermopylae against the Persian invasion force in 480 B.C. and died fighting to the end after a Greek traitor showed the enemy a path through the hills to get behind them.
[3] Subjunctive iniciant (from inciciō, inicere, iniēcī, iniēctum) in a relative clause of characteristic.
[4] Julius Caesar sailed to Alexandria in Egypt in summer 48 B.C. in pursuit of Pompey, whose forces he had defeated at Pharsalus in western Greece, only to find that his rival had been murdered by King Ptolemy XIII who hoped thereby to win his support. Caesar had in fact planned to pardon Pompey and he subsequently intervened in support of the king’s sister, Cleopatra, who was engaged in a civil war against him. Caesar was out-numbered and was besieged in a section of the city for several months but finally, with help from Mithridates, the ally whom he summoned from Pergamum in Asia Minor, he defeated Ptolemy at the Battle of the Nile in February 47.


[1] Impersonal passive of the intransitive verb labōrō.
[2] Inns generally had a poor reputation in the Roman period and those with a wide enough circle of friends and acquaintances normally preferred to rely on their hospitality even if accommodation was available elsewhere.