QUESTIONS ARISING FROM 115th. MEETING – 23/9/20
(the record of earlier meetings can be downloaded from the main Circulus page as can the version of Ciceronis Filius with illustrations added. The illustrated text of Genesis is available on the Genesis page, of Kepler's Somnium on the Somnium page and of Nutting's Ad Alpes on the Ad Alpes page)

For the first half hour of the Zoom session only Zhang Wei and John were on-line but they were joined at 8 by Valerie and then also by Tan and Sam.
​
Zhang Wei and John discussed the on-line edition of Eutropius’ Breviarium Ab Urbe Condita which John is currently preparing and which can be accessed at https://linguae.weebly.com/eutropius.html This summary of Roman history, written in 369-370 A.D., covers the period from the foundation of the city, traditionally placed in 753 B.C., till 364, when Eutropius’ patron, the emperor Valens, came to the throne. He relied principally on Livy and then probably on a lost work seems to lie behind similarities between Eutropius's own account and those of some of his contemporaries. 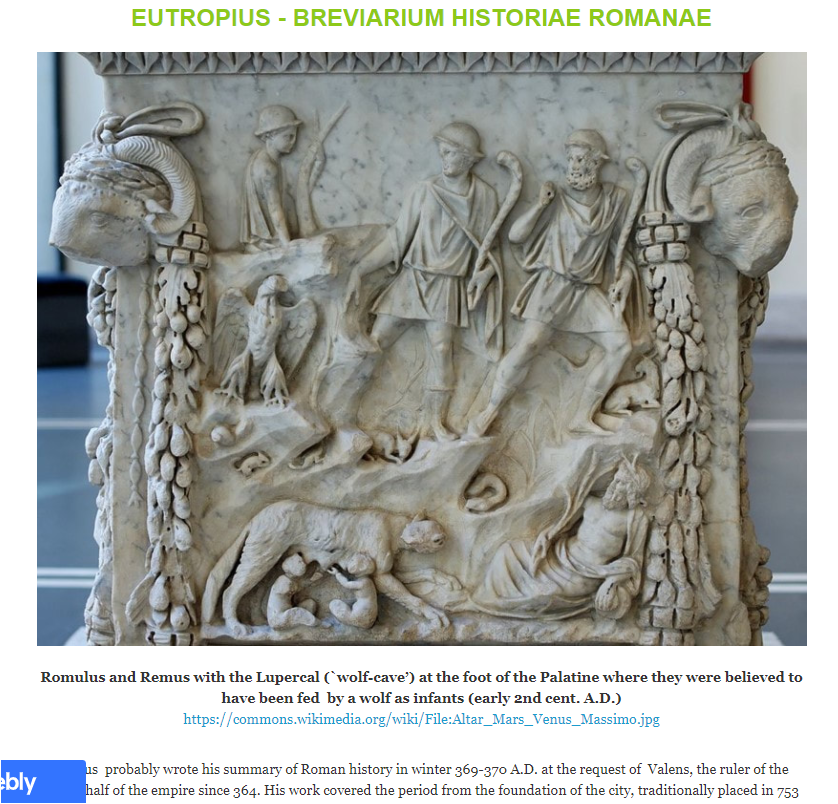 ​Eutropius, who was himself a senator, had definite shortcomings as a historian, particularly a bias towards the senatorial aristocracy in all periods and a tendency to ignore the shortcomings and misfortunes of emperors whom he approved of. However, his straightforward Latin makes him very suitable for anyone seeking an authentic ancient text which does not present too many difficulties.
​ 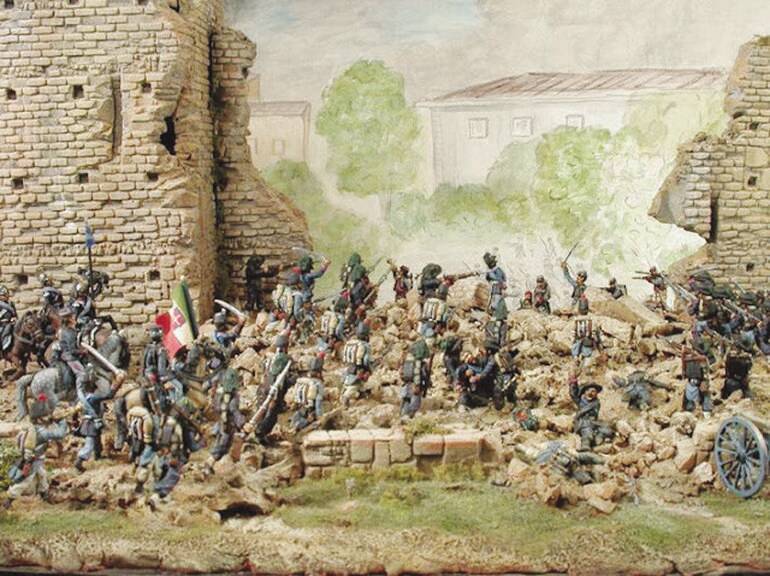 
​In response to John’s posting on Facebook about the 150th anniversary of the Italian state’s 1870 capture of Rome and annexation of the hitherto independent Papal States, Lennon Wong, who teaches ancient Greek in Hong Kong, mentioned David Gilmour’s the The Pursuit of Italy, which suggests that unification may not actually have been in the best interests of the people of the country’s very diverse regions. This prompted consideration of the same question as applied to many other countries. Would China have been better off had the separate regional states continued their independent existence rather than being forced together by Cheun Chi Wong (aka Qin Shi Huang)? Would South Asia be faring better as the twenty or so separate states that would have probably emerged without the British conquest?  Zhang Wei said that Sun Yat Sen had been in secret communication before 1911 with European powers suggesting they could take over non-Han regions like Tibet and Xinjiang. This might have been simply a tactical move on his part to obtain Western support fro his campaign against the Qing government but he perhaps at that time regarded such places as not fully part of the `real’, Han China. In any case, before actually coming to power bhe certainly proclaimed his belief in the right of non-Han people within the Chinese Empre to self-determination. Once, in power, of course, his enthusiasm for such a principle drastically diminished.

Zhang Wei had recently been reading Edward Gibbon’s Decline and Fall of the Roman Empire. This 18th century historian popularized the identification of the Huns, invaders from the steppes who terrorised Europe under their leader Attila in the 5th century A.D, with the Xiong-Nu (匈奴) of Chinese history, a theory first put forward by by French scholar Joseph de Guignes in 1757 and discussed in the Circulus meeting for November 2018 , The supposition is that the Xiong-Nu, who moved westward unde Chinese pressure and disappeared from the main Chinese record ater their defeat by another tribe in 153 A.D. in what is now Tashkent, later resumed their wanderings and finally reached Europe. The theory, based primarily on the similarity of names and nomadic life-style, was generally accepted until the mid-20th-century but then became much less popular, partly because of the 200 years that elapsed between 153 and their appearance in Europe. In recent years, however, the ide has again begun attracting support, one of the arguments being the identification of the `Xiong-nu’ with the Huna of Sanskrit sources by a Buddhist writer in Afghanistan in the 3rd cemtury A.D. (see details at https://en.wikipedia.org/wiki/Origin_of_the_Huns).

Zhang Wei also suggested that groups like the Mongols, the Uighurs and the Tatars might be a continuation of the Xiong-Nu. This is a difficult question as nobody is sure what the Huns’ or the Xiong-Nu’s original language(s) was/were, One relatively recent suggestion is that the both groups originally spoke a language belonging to the Yeniseian family of Siberia but that the Huns later switched to a Turkic dialect (see https://en.wikipedia.org/wiki/Hunnic_language and https://en.wikipedia.org/wiki/Xiongnu#Ethnolinguistic_origins).  Turkic is the language family to which both the Uighur and Tatar languages and it does seem likely that these earlier groups, who did not survive as distinct peoples, did contribute some of the DNA of modern steppe peoples.
​ 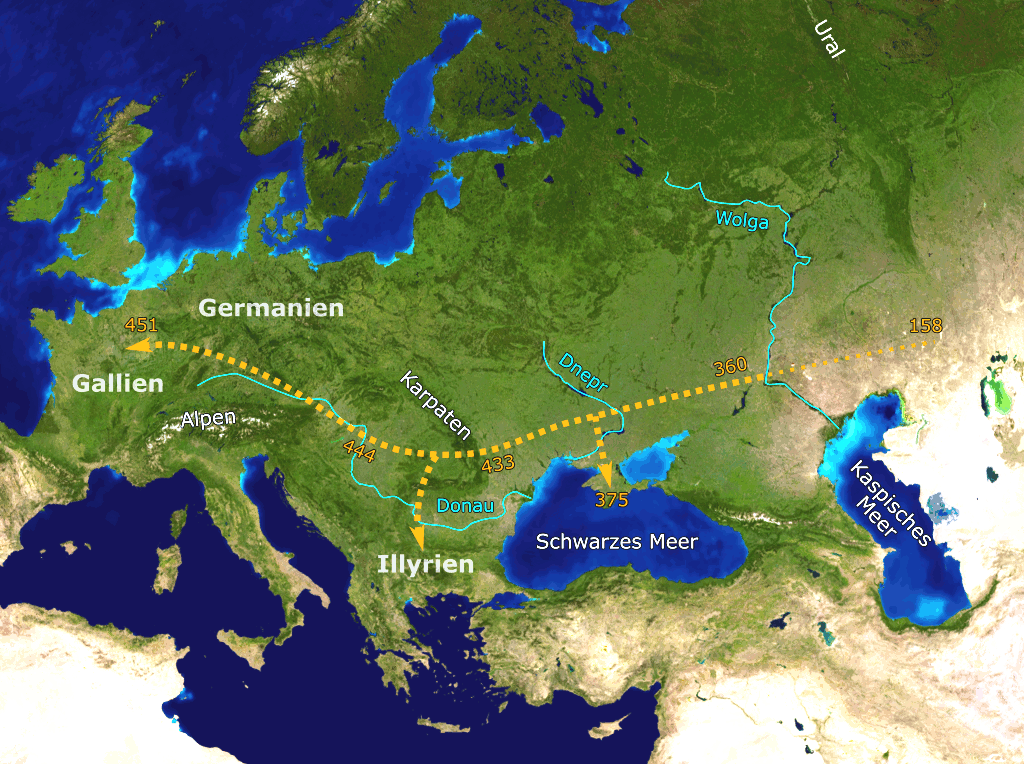 
Valerie and John spoke briefly again about the teaching of ancient Greek, for which Valerie currently has two beginning students, both now at school in the UK. John has one student here in Hong Kong, who wll be doing the National Greek Exam next year. He is still using Athenaze supplemented by material he is now producing himself and which are available at https://linguae.weebly.com/res-graecae.html

We read chapter 29 of Ad Alpes, which in concerned chiefly with Stasimus’s misadventures with a farmer’s fierce dog so introduces fewer historical or cultural points than usual. We noted the use of sicūbi, which John initially thought could mean `if at any time’ as well as `if anywhere’ but Lewis & Short, like Nutting’s own vocabulary, gives only the spatial meaning. It alo labels the word as `rare but classical’. Another relatively rare word in the chapter is erus, -ī m, a synonym of dominus.

NOTES
[1] The Umbrian Nuceria (modern Nocera), whose name meant `New [town’] in the Osco-Umbrian language, came under Roman control around 300 B.C. The original settlement was in the valley but after this was destroyed, perhaps by Germanic invaders, in the early 5th century, the survivors shifted to the present hill-top site (see https://en.wikipedia.org/wiki/Nocera_Umbra). This town should not be confused with the Nuceria in Campania, many of whose citizens perished in a riot during a gladiator show at Pompeii in 59 A.D. (see Stage 8 of Cambridge Latin course).
[2] videor (passive of videō) means both `I am seen’ and `I seem’

NOTES
[1] Literally `I will throw on’
[2] Stasimus is punning with the words mālum, -ī n (evil thing) and māla, -ae f (cheek). Both have to be distinguished from mālum, -ī n (apple or similar-shaped fruit) and mālus, -ī m (apple tree, ship’s mast).

NOTES
[1] autem has little real meaning here and could actually be left out in the translation.
[2] Literally `with running poured-out’