The Cambridge Advanced Learners' dictionary has sufficient vocabulary for most puropses and gives more easily understandable explanations than those in dictionaries for native speakers. The online version gives pronunciation in phonetic symbols but no sound files.  You can find a list of the symbols, with recorded pronunciation for each one, on the BLMCSS site but you have also to download the silipa93 font from that site to see the symbols displayed properly and this can be done on Internet Explorer but not Firefox

Dictionary.com provides definitions from standard dictionaries and therefore some of the explanations may be too complex for students at intermediate level. However, recorded pronunciation (American) is provided for each word. The site also includes a facility for translation between English and the world's major languages.  The pronunciation of the names of many persons and places names is given on the Howjsay or Inogolo sites.

The British National Corpus is is a computer database of around 100 million words of text (including both published material and transcripts of conversations). It allows the user to search for examples of the use of particular words or phrases. With the simple search function, for which registration or payment is not required, only a maximum of fifty examples will be displayed for each query but this is normally sufficient for most purposes.

The Hong Kong University of Science and Technology My Words site includes a range of activities to assist in vocabulary learning.  Access is free of charge but registration is necessary.

You can test your knowledge of the names of major world cities with a composite satellite photo of the world at night. The brightest light patches are large cities and, if the cursor rests on one of them for a few seconds, the name will pop up.

BBC `Words in the News'

The BBC website's `Words in the News' section includes a large collection of news stories with attached sound files and a glossary of difficult words. You can download the file below for detailed instructions on how to use these, plus comprehension questions and expanded vocabularies for stories from the first half of 2002. The second file gives answers to the comprehension questions:

These exercises, intended to provide practise in listening comprehension, vocabulary study and short writing,  make use of short videos from the BBC site.  When used with a class, the topic should be introduced and students then told to watch the video and to remember as much of the contents as they can. After eliciting what they can remember, the worksheet should be distributed and students asked to do the gap-filling exercise whilst watching the video again. They then match the vocabulary items and finally write about the discussion question.   For each exercise, the first download is the worksheet itself and the second the answers to the listening and vocabulary tasks: 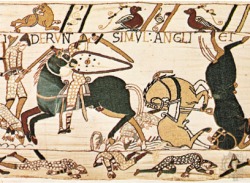 Download File
Further information on the history of English, plus a full list of countries where the language has  official status is given on KryssTal.com
If you are interested in Old English, the form of the language spoken before about 1100, there are online lessons, with recordings of the pronunciation, on the University of Calgary site.

Designed as a supplementary exercise for a textbook unit dealing with a re-enactment of the Battle of Hastings, the Powerpoint is accompanied by a worksheet with questions to be answered whilst watching it. Several of the photos used are taken from the Woodlands Junior School site, which is designed for British children aged 7-11 but also useful for lower secondary students studying english as a second language.  Many illustrations from the Bayeux Tapestry depiction of the battle are also included. The worksheet  concludes with a follow-up assignment researching re-enactments of two other battles.

A dictogloss exercise differs from a conventional dictation by requiring students not to write down as they listen but to reconstruct the whole passage AFTER they have heard it read through two or three times. They are usually provided with a lit of key words to help them to do this and, working in small groups, they are able to reproduce the gneral meaniing by pooling individual memories and also expected to work together to ensure accurate grammar and spelling. In the format use here, keywords are elicited from the class by showing a Powerpoint before the full list is finally displayed. The technique is especially useful for language-across-the-curriculum work by using passages reinforcing language content from other subjects.  The Word files below include the word list and also the original passage which can be displayed at the end. Before that stage, it is a good idea to require a group which has finished quickly to present their own reconstruction either with a visualiser or by typing it into the classrooom computer. The rest of the class can then be invited to try to improve the result before the original is shown for comparison.

Download File
3. ABU SIMBEL
This is a more elaborate set of exercises, including questions on vocabulary and complex noun phrases. The passage is adapted from a travel guide account of the Abu Simbel temples and their removal and reconstruction during the building of the Aswan dam. The exercises are in the third file.

Dinner in the Jungle

This is a comprehension and vocabulary exercise based on a description by a BBC correspondent of a visit to an Amazonian tribe in Brazil, with an introductory Powerpoint covering the more difficult words. The text is still on the BBC site but the sound file originally accompanying it has now been deleted and a teacher would need to read the passage out aloud himself/herself for the listening task (see detailed instructions at the end of the Word file).  Students working on their own could simply do the matching of words and meanings and the other questions on pg. 2.  Answers to the exercises are in the third file. 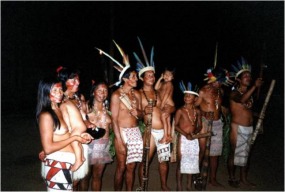 A worksheet for use with the first of the `Amazing Orange' videos on Youtube.  Students have to fill in words as they listen and then to explain the meaing of some words and phrases. The second page gives the answers

This is a comprehension exercise based on a video of a bungee jump.  An advanced class could be asked to complete the worksheet (pg. 4 of the Word file ) immediately after introduction of the topic of extreme sports and  viewing the Powerpoint. A weaker class could be shown the transcript and glossary (p.1-3) before tackling the questions. Answers are provided in the second Word file. The video itself is too large (13 Mb) to be uploaded to this site but the file can be requested using the comments form on the home page.

1. MNEMONICS by Andrew Morton
This is an impressively detailed recalling by English teacher and jazz musician Andrew Morton of a school hike in 1965 along the River Trent and the traumatic event that interrupted it.

2. LETTER TO AMERICA by John Cleese
Written when the result of the 2000 presidential election was under dispute, this spoof announcement of the USA's reversion to British crown colony status is perhaps a little childish but at the time  it amused most Brits and quite a few Americans, though it may have made the author rather unpopular in Kansas.  It is also a handy summary of some of the differences between British and American English.

The Sounds of English

This file provides an introduction to the sounds of standard British English (RP) and to the phonetic symbols as used in modern dictionaries with older symbols also listed where they differ. There is in addition a brief outline of stress and intonation patterns and of the use of strong and weak forms. For the symbols to display properly it is necessary to install the SIL ipa93 font by downloading the second file and then launching in the normal way.  Answers to the accompanying exercises are now (May 2010) being edited and will be uploaded shortly.  You can hear the individual sounds demonstrated on the Baptist Lui Ming Choi Secondary School site here.

Download File
For younger learners, or others who  want  a guide to the sounds most frequently associated with particular letters and letter combinations in the standard orthography, there is a useful chart designed by Alison Logan on the Kowloon City Baptist Church Hay Nien (Yan Ping) Primary School site here. This includes illustrations of the mouth shape for each sound and clicking on a letter lets you hear  the corresponding sound in Canadian pronunciation.