THE ARREST OF SINGHA SHAMSHER 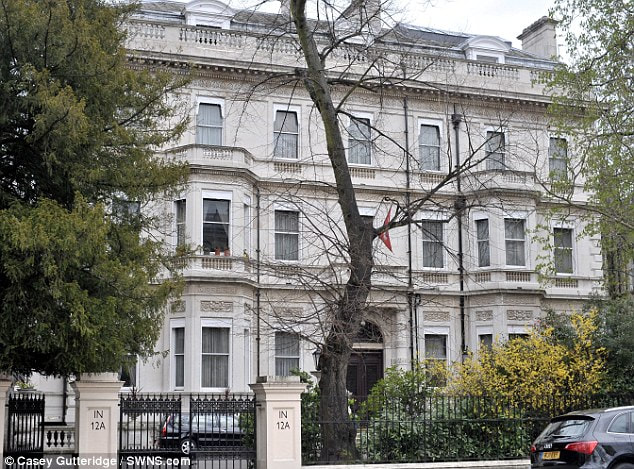 The Nepal Embassy, Kensington Palace Gardens
​© Casey Gutteridge / SWNS.com
​
On 16 May 1945, Robert Dunbar, head of the British Foreign Office’s Treaty Department wrote to the British Minister in Nepal. George Falconer about the arrest in London three months’ earlier `on a charge of gross indecency’ of Nepal’s Minister in London, Singha Shamsher J.B. Rana, third son of Maharaja Chandra Shamsher.  Singha’s diplomatic immunity ensured his immediate release and the incident was  successfully kept secret, with no report appearing in the British press nor, so far as I have been able to discover,  any rumours entering into general circulation in Kathmandu. The ambassador himself remained in London until early 1947.

I am currently writing a paper about the background to the incident and the light it sheds  on tension within the Rana family, and particularly between Bahadur Shamsher, son of the then reigning Maharaja, Juddha Shamsher, and the sons of Chandra Shamsher. If anyone reading this has any knwledge of the affair, and in particular of the role allegedly played by the 1st Secretary, Mir Suba Krishna Mohan, I should be very grateful to hear from them. i can be reached by email here.

A recent unpleasant incident in which the Nepalese Minister was involved has focussed our attention upon the apparently chaotic state of affairs in the Nepalese Legation here. The minister has hinted at this before but it now seems impossible for us to ignore it.

2,     The minister was arrested towards the end of February on a charge of gross indecency. Having explained his identity he was at once released. The non-diplomatic party concerned appeared in a police court and was fined. No publicity has resulted so far.

3.    We felt that we could not ignore the incident and it was decided that I should summon the minister to the Foreign Office and warn him that if another incident occurred or if anything appeared in the press, we should have to take official notice and request his departure.

4.    I acted accordingly. The Minister expressed relief that I had done so, claimed that he was an innocent victim and asked to be allowed to come again with documentary evidence to show how the source of all the trouble lay in the difficulties he was having with Mir Suba Krishna Mohan, his First Secretary.

5. The second interview, to which the Minister came armed with a fat dossier, was a most personal one, as he broke down frequently and burst into tears at intervals during his stay of about 1½ hours.

6. So far as I could follow a somewhat incoherent story, it was that his First Secretary was employing someone to spy upon him. On the occasion of the incident, he himself was engaged on watching the First Secretary and his spy companion. He had been the object of indecent assault (by someone apparently unconnected with the main story) which he had been in the act of repelling when the police came upon the scene. This was the finishing touch to all he had gone through in the last two years.

7.    His statement about his secretary link up with what he said in the course of several interviews with Peel of the India Office last year – and I believe also with Ashley Clarke when he was head of the Far Eastern Department of the Foreign Office. He claims that Krishna Mohan was placed in the Legation by General Bahadur, the Maharaja’s son, and has been charged by him to report to him on the Minister. As he is General Bahadur’s man it is not easy for the Minister to keep him under control. We understand that Krishna Mohan treats the Minister with contempt in the presence of other members of staff and it seems clear that the situation inside the Legation must be a most unhappy one.

(pg.2)
8.    We have of course only his Excellency’s word for all this. But if his present acute nervous state is any guide, he is telling the truth.

9. It is in these circumstances that we turn to you.  We feel that we should not allow this state of affairs to continue if we can possibly put an end to it. But the difficulty is how to do it. Krishna Mohan has been here long enough, and it is high time he went back home. As for the minister, it will be six years on the 4th May since he presented his credentials. Consequently he too could quite appropriately have a successor, Our view is that both the Minister and the Secretary should return to Nepal. If the Minister were to return first. Krishna Mohan would become Chargé d’Affaires and might try to exercise upon the New Minister something of the influence he appears to have tried to exercise over the present one. You will know best what possibilities there are of bringing about quickly and quietly the return of both these gentlemen to Kathmandu and we should welcome any observations you have to offer on the contents of this letter.

10. The Minister told me that he had already tried, at an earlier stage, to persuade the maharaja to recall him on grounds of ill-health, but he has been unsuccessful. We feel that, if an excuse is wanted, the present state of the Minister’s health, as shown at my interviews, affords ample grounds.  But you will realise that the incident referred to in this letter must be regarded as putting out of court the question of the award to the Minister of any further honour.[2]
Yours ever,

P.S. Since the above was written, we have learned privately from the Minster that the Maharaja has agreed to a suggestion made by him that Krishna Mohan should be removed. This, if true, goes part of the way to the objective set out in paragraph 9 above. We do not wish to complicate the issue by initiating any direct enquiries either in London or Nepal.[3]