The words of this famous carol shown in black are those actually sung by Andrea Bocelli on YouTube and the additional verses in green are included in the Catholic Church's manual of Gregorian chant, Liber Usualis.  The full lyrics, with variants, are given on the Gaudium Mundo site. The tune, and probably also the original version of the words, were the work of John Wade, an 18th century English Catholic living in France (see Wikipedia and the essay by John Stefan). YouTube (TūTubulum) also has performances by Luciano Pavarotti and by the Three Tenors together.

A womens' choir's performance of this medieval Advent hymn can be  heard here. They sing the text below, which omits the two last stanzas. The translation is literal and, as far as possible, keeps to the order of words in the original Latin. This cannot be done in the lines marked with an asterisk as without the clues given by the case endings of the Latin words,  the order has to be changed to show which words go together.  For more detail on the history of the  hymn,  see Laura Gibb's Gaudium Mundo page

This carol was traditionally sung on `Gaudete Sunday', the third Sunday in Advent. There are several interpretations available on the Internet including those by Steeleye Span  by the Mediaeval Baebes by the choir of Clare College, Cambridge (with medieval drum accompaniment) and by Libera with a boys' choir as well as one by dwsChorale in which the words are hear particularly clearly and which can be heard on the Wikipedia page for the song.  The carol was included in the 16th century Finnish/Swedish collection, Piae Cantiones, but may have originated in Bohemia in central Europe. For more details, see the Wikipedia article and also Gaudium mundo, which explains  the reference in the third stanza  to the gate mentioned in the Old Testament (Ezechiel 44). This was closed after the God of Israel passed through it and would be opened again only for the Prince.  The Latin is translated below word-for-word. 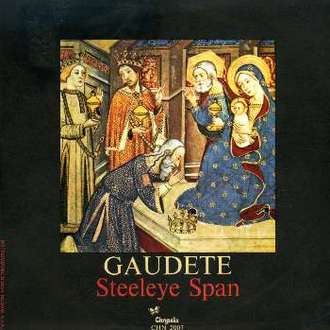 The words of this carol, particularly popular in Germany, date from the 14th century  and the tune it is normally sung to probably dates from the 16th (see the account on the Hymns and Carols of Christmas site). There are seveal performances available on Youtube, including one by King's College choir, arranged by John Rutter,  Michael Praetorius's setting, with additional words in German between the stanzas, an a capella version by the Christopher Wren Singers, and a recording made by `Bella Desconocida' in Breslau/Wroclaw, where the tune was first published.

* I.e.`Let praise, honour, glory proclaim with pious voice the new-born child. '   The verb is singular, although the three nouns in the last line of the stanza form the subject of the sentence together.

And in the same region there were shepherds keeping vigil and
watching their flocks by night. And behold, an angel of the Lord
stood beside them, and the glory of God shone around them, and they
were filled with great fear. And the angel said to them: Be not
afraid! For behold, I bring you glad tidings of great joy which will
be for all people; for to you is born today Christ the Lord in ithe
City of David. And this shall be a sign for you: you will find a
babe wrapped in swaddling clothes and lying in a manger. And
suddenly there was with the angel a multitude of the heavenly host,
praising God and saying: Glory to God in the highest, and on earth
peace to men of goodwill. (Luke 2: 8-14)

Why do the heathens rage? and the people think vain thoughts? Glory
to the Father, glory to the Son, glory to the Holy Spirit! As it was
in th ebeginning, is now, and ever shall be, world without end.
Amen. (Psalms 2:1; old church hymn.)

With you the beginning on the day of your strength, with you the
beginning in the splendors of the saints. (Daniel 7:27)

Hallelujah, praise you heavens, and exult, you earth, for theLord
has comforted his people and iwll have mercy on his poor.

Rise, you daughter of Zion. Hallelujah. Praise at night, at the
beginning of the night watch. Hallelujah. May the Righteous One go
out from Zion in splendor, may its Savior shine like a lamp.
Hallelujah. (Psalms 119:148, 37:6)

Bring offerings and worship the Lord in his holy habitation. Let the
heavens rejoice and the earth exult in the presence of the Lord, for
he has come. Hallelujah. (Psalms 5:7, 69:34, 100:2)

Christmas in the Middle Ages

Album by Musica Medievale, uploaded to YouTube in December 2020. Lyrics for the songs are being slowly added below