QUESTIONS ARISING FROM 103rd. MEETING – 20/9/19
(the record of earlier meetings can be downloaded from the main Circulus page as can the version of Ciceronis Filius with illustrations added. The illustrated text of Genesis is available on the Genesis page, of Kepler's Somnium on the Somnium page and of Nutting's Ad Alpes on the Ad Alpes page) 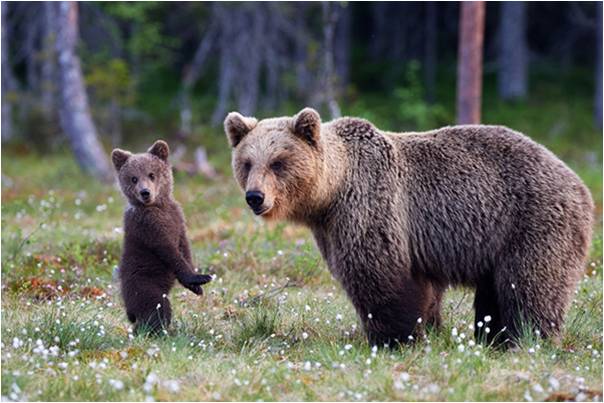 ​We discussed our activities duting the fēriaes aestīvae, using the Latin prompts given below. Zhang Wei had been in Alaska, which he explained is actually quite warm in the summer months, with temperatures in Anchorage up to around 30 degrees. However his attempt at a country stroll was curtailed when, just afte he locked his car door, he was told that abear cub had been sighted just ahead. As the mother bear would presumably be not too far off, Zhang Wei and family got back in the car and made a safe retreat.

Tan and her family had been in Australia, including a hiking trip in Tasmania, home to both the wel-known `Tasmanian devil’ and also the quoll, a marsupial species that none of the rest of us had ever heard of. Both species are listed as threatened but the status of the Tasmanian devil is worse and it is now found in the wild only on Tasmania, its numbers drastically reduced in recent years by devil facial tumour disease. 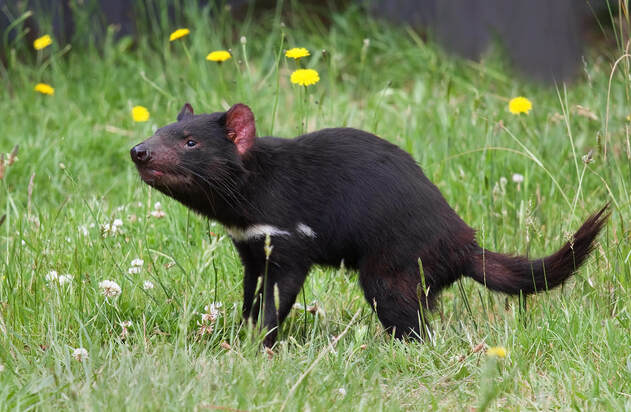 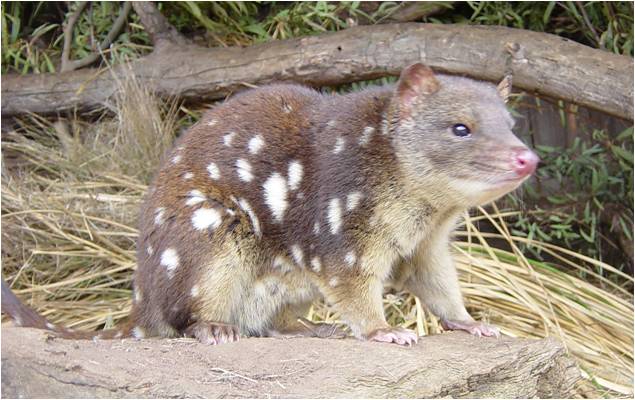 A quoll photographed at a rescue centre
https://en.wikipedia.org/wiki/Quoll

Following his usual trip to Nepal, John had been touring in Greece with his family, visiting Athens, Delphi. Corinth and Nauplion, and finishing with four nights on the island of Lemnos in the NE Aegean. His family were particularly impressed by the splendid setting of Delphi and the romantic castle ruins above Nauplion and Lemnos’s capital. Myrina. From 1833 to 1834, Nauplio was the first capital of the modern Greek state before King Otto decided to move the government to Athens, Lemnos boasts the remains of what is believed to be the oldest urban settlement in Europe as well as many fine beaches. The island was headquarters for the allied forces in the Gallipoli campaign of 1915 and also the site for the surrender of Turkish forces in the Aegean theatre. 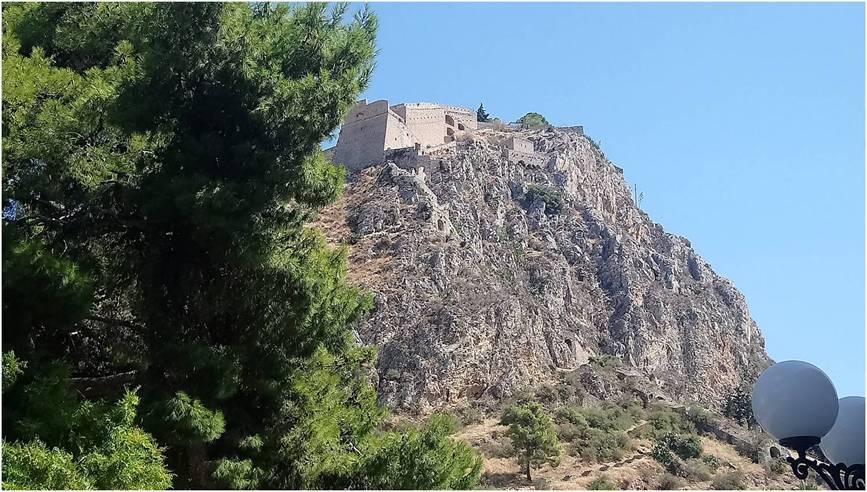 The Palamidi fortesss at Nauplion 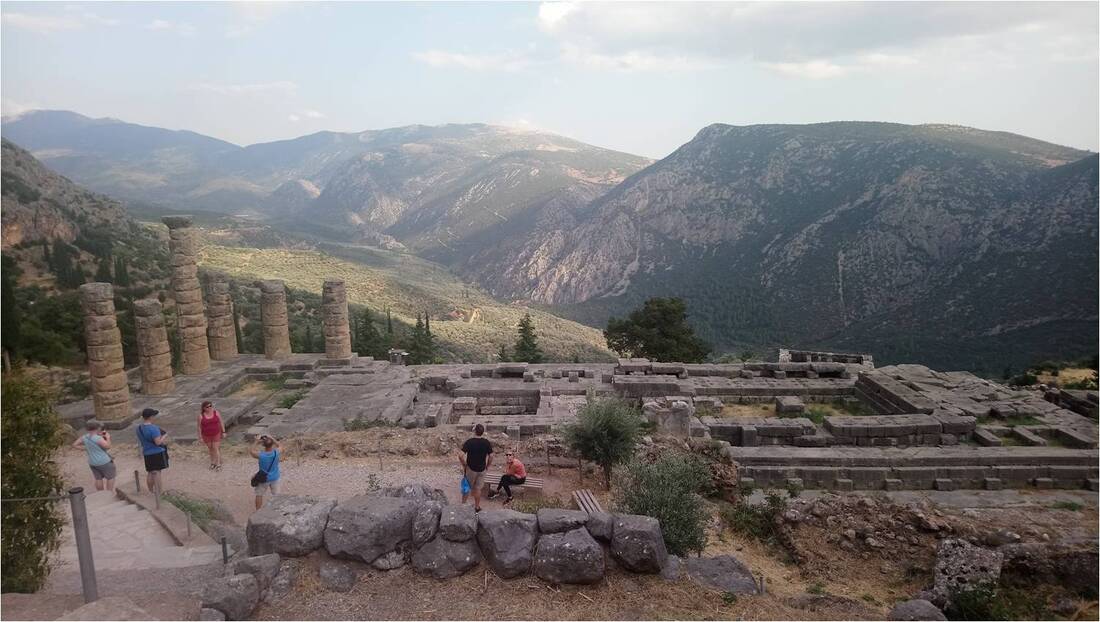 The Temple of Delphi at Apollo
We read chapter 17 of Nutting’s Ad Alpēs (see text below), which covered among othere topics the sword of Damocles and the Battle of Cannae. We noted the controversy over whether Hannibal would have been able to capture Rome itself if he had taken Maharbal’s advice to march on the city immediately after his stunning victory in 216 B.C. Nutting’s phrase for `would have been able to capture the city itself is urbem ipsam occupāre potuit, where an English speakere would have expected potuisset (pluperfect subjunctive).

The Damocles anecdote as related by Cicero involves good-looking young boys to wait on him at dinner and one of us wondered whether Cicero was having a dig at Greek homosexual tendencies. John thought this was unlikely since Romans did not think it wrong for an adult male to have a sexual relationship with a boy, stigma only attaching to an adult who was the passive partner in such a relationship. The situation was in some way parallel to that existing in some parts of Afghanistan today..

The 19th century artist who illustrated the Damocles story chose to change the attendants to females (see the illustration below), whether because of unease over any suggestion of homosexuality or because young women better fitted his idea of a life of princely luxury and indulgence.

This topic led Tanya to remember that her eight-year-old daughter, to whom she is currently reading Lord of the Rings, proclaimed it was a `gay novel’ because female chacters played so small a role in it. Tanya herself was sceptical about that but believed there was a gay relationship between Mole and Ratty in Wind and the Willows. John suggested that male camaraderie of characters in these classics (and of many of the authors themselves in real life) did not necessarily involve homosexuality. In the case of Tolkien and Lord of the Rings there is an additional complication as some believe that the model for Gandalf was actually the author’s aunt, Jane Neave – see Tolkien’s Gedling 1914, co-authored by John’s old schoolmate, Andrew Morton (https://www.amazon.co.uk/Tolkiens-Gedling-1914-Andrew-Morton/dp/185858423X).

We briefly discussed the Latin verbs for `play’ a musical instrument: canere/cantāre (literally `to sing’) for plucking strings or blowing into a pipe or trumpet and pulsāre (`to strike’) for percussion instruments.. There is sometimes a dispute over whether a modern piano should be placed in the percussion or string category but most people would definitely use clāvic(h)ordiō canere/cantāre. In Spanish the verb tocar. derived from Vulgar Latin* toccāre (to strike) means both `to touch’ and `to play (an instrument)’, whilst tañer, from tangere and thus originally meaningt `touch’, now means only `to play’. It is uncertain at what time toccāre came into colloquial Latin but as the word is itelf thought to have been of Germanic origin it was most likely in late antiquity or early medieval times. There remains the possibility that ordinary Romans in the classical period might have used instrumentum tangere for `to play an instrument.’ John bemoaned his own inability to `sing’ in either the vocal or instrumental sense and recalled how his one attempt at a karaoke performance (during a school open day) had resulted in the room rapidly emptying. 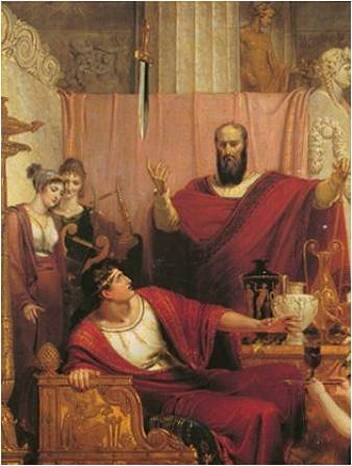 
There was also mention of Chinese sayings and ways of remembering them. The equivalent of Latin lupus in fābulā (`wolf in the story’) and `Speak of the devil!’ is 一講曹操, 曹操就到 (yat gong Chou Chou, Cho Chou jau dou! - `As soon as you say `Chou Chou’, Chou Chou arrives’), referring to the Macchiavellian ruler in the Three Kingdoms period.  John always remembers this one because just after he’d been taught it on a Cantonese course at CUHK, he was climbing the hill to the Mall area and came up behind one of his instructors whilst she was complaining about how many times he had written the Romanisation of the character 印 (yan) with a tone 1 (high-falling) mark instead of the correct tone 3 (mid-level).  John announced his presence by quoting the proverb, thus ensuring that both this and the right pronunciation of印 are securely lodged in his memory. He also recalled the phrase 千古罪人 (chin yan jeui yan, `sinner for a thousand ages’, `eternal villain’, furcifer aeternus), which Lu Ping of the Hong Kong and Macau Affairs Office applied to Chris Patten over his electoral reform proposals. John subsequently used it from time to time on the blackboard when listing students who had not handed in their assignments.

Finally, Tanya explained the banding system for Hong Kong schools, students being divided into three bands on the basis of their results in their last year in primary school. Parents of Band 1 students get first choice of secondary schools. Band 3 students, who end up together in the lease prestigious schools, include not only those who have always struggled academically but also very bright students who cracked up under the pressure of the system..
QUAESTIŌNĒS ADS FĒRIĀS PERTINENTĒS

Ut semper, labōrābam!
As usual, I kept on working

NOTES
[1] ubi is literally `when’ but āfter’ would be a more idiomatic translation here.
[2] Very comon word order for the combination of preposition with noun and interrogative adjective, as in quam ob causam?(for what reason?) etc.

NOTES:
[1] Dionysius II, who ruled Syracuse in Scily from 367 to 357 B.C. and from 346 to 344. The story of Damocles is knpwn only from a passage in Cicero (Tusculānae Disptātiōnēs, 5.61), whose ultimate source was probably the Sicilian historian Timaeus (c. 345 – c. 250 B.C.). See https://en.wikipedia.org/wiki/Damocles
[2] Contracted form of the pluperfect subjunctive commemorāvisset.
[3] The painter Richard Westall (p.32) changed the sex of the attendants.
[4] Literally `scents were being burned’

NOTES:
[1] capitis: literally ōf head’, stanging here for `capital punishment’
[2] Quī comparētur: literally, `who might be compared’
[3] Achaia(or Achaea) was originally the name for the northern part of the Pelolponnese (i.e Greece south of the Isthmus of Corinth) and Achaioi was used by Homer as an ethnonym for Greeks in general. After Greece was brought fully under Roman control in 146 B.C. Achaea was the name of the province comprising most of modern Greece, the sense in which the word is used in this book.
[4] Perhaps Philoxenus of Leucas (an island off the NW coast of Greece), 425-350 B.C.
[5] Prisoners in Syracuse werere regularly kept in the quarries to carry out forced labour.

NOTES:
[1] Diogenes the Cynic (412 or 404 to 323 B.C)., the philosopher famous for living in a barrel and for telling Alexander the great to stand out of the way of his sunshine (see https://en.wikipedia.org/wiki/Diogenes ).
[2] manum cōnseruit: literally, `joined hand’.

NOTES:
[1] facta est: literally `was made’.
[2] paulum āfuit quīn plus the subjunctive conveys the idea that an outcome was only just avoided. Rome came close to losing the war altogether after this defeat in 216 B.C.
[3] The military tribunes formed a comander’s staff and must be distinguished from the tribūnī plēbis who were magistrates elected to represent the common people.The abbreviation for the praenomen `Gnaeus’ has a `C’ because it was devised before the introduction of the letter `G’ ..

NOTES:
[1] Beneventum (modern Benevento) is a city on the Appian Way about 30 miles north-east of Naples
[1] Maharbal was in charge of Hannibal’s cavalry and also his second-in-command. Hannibal may, however, have been right to hesistate because he had no siege engines.
[2] Placing ego first in this kind of phrase was normal in Latin. To avioid having to explain this every time, the rule is deliberately broken in Circulus Latinus emails and ego placed last in accordance with English usage. When the 16th century statesman Cardinal Wolsey used the phrasee ego et rēx meus (`I and my king’) he was grammatically correct but probably annoyed Henry VIII, who never liked to be upstaged!
[3] The use of the genitive pural verbōrum is a little strange here. Either the reader is supposed to supply mentally the nominative memoria, or the writer considers in mentem vēnit as equivalent to the verb meminī (I remember), which frequently does take the genitive. Horace’s full name was Quīntus Horātius Flaccus.
[4] Horace, Odes III, 1: lines 17-21. This is written in Alcaic stanzas, each of four lines, with the pattern – – u – – : – u u – u – /  – – u – – : – u u – u – / – – u – – – u – – /– u u – u u – u – –  .The quotation includes two words from the start of the next stanza. There is an attempt, perhaps not very successful, to reproduce the original rhythm in the translation at https://www.poetryintranslation.com/PITBR/Latin/HoraceOdesBkIII.php
[5] dum is normally followed by a present tense, even when the main clause is in a past tense.