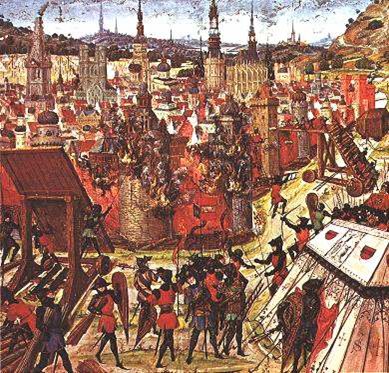 _ This song from the Carmina Burana celebrates the capture of Jerusalem from the Muslim Arabs by the Crusaders on 15 July 1099, which is illustrated in this picture from a medieval manuscript. This day was subsequently kept each year as a festival. The whole song is included as track 4 of the CD `Carmina Burana’ (volume 1) by the New London Consort and Philip Picket (L’Oiseau-Lyre, 417 373-2), which can be heard on-line at http://www.youtube.com/watch?v=-CWm0765jGA.  In the lyrics given here medieval spellings (e.g. hec for haec) have been replaced by classical ones as these are more familiar to those learning the latter, even though the medieval orthography is a better representation of the later pronunciation. Macrons have similarly been added even though the old distinction between long and short vowels was lost at the beginning of the Middle Ages.
The most famous eyewitness description of the slaughter of the inhabitants of the city which followed  the fall  of Jerusalem can be read in the original Latin and in translation at the bottom of the page.  Other accounts are available  here in translation.

Solemniacum: probably not a variant of `Solyma’ (one of the names for Jerusalem itself) but rather the Benedictine abbey founded in 632 by St. Eloi at Solignac near Limoges in France(see the account in French at http://www.petit-patrimoine.com/fiche-petit-patrimoine.php?id_pp=87192_10 ). The picture shows the village with its 12th century bridge in the foreground. The name Solemniacum means `the domain of Solemnius' and refers presumably to a Gallo-Roman who owned the land and built a villa around which a village then grew up (this was a common development and explains why the word `village' itself derives ultimately from the Latin vīlla). The French website dates Solemnius's foundation to 28 B.C. 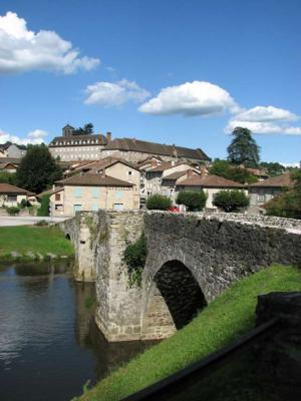 _ Dāgon; Dagon was the national god of the Philistines (非利士人), enemies of the Jewish people in the Bible; here the word refers to Muslims.

Amālec: name of a Bedouin tribe which repeatedly fought the Jews in the Bible. According to the Book of Samuel, Saul, who defeated them at the beginning of his reign, lost God's favour because he failed to carry out fully the divine command to kill all of them together with their animals. This episode in the Old Testament was interpreted as providing justification for the slaughter of religious enemies in subsequent centuries.

Spiritus: i.e the Holy Spirit or Holy Ghost, who is supposed to have come down as tongues of fire over the heads of the apostles at Pentecost fifty days after Jesus ascended into Heaven

ignis venit annīs singulīs: a reference to the supposedly miraculous blue fire which usually appears to descend in the Church of the Holy Sepulchre on Holy Saturday (the day before Eastern Sunday) according to the Orthodox calendar. See the account on the Holy Fire site.

Areūna: more usually spelled `Araunah’, this refers to the man from whom David bought a threshing floor to set up an altar on the site where he founded the city of Jerusalem and where Solomon later built  the temple. Gebusaeus is normally transliterated ` Jebusite’ in English and presumably refers to an ethnic group which lived in the Jerusalem area before the Jews conquered it.


THE MASSACRE THAT FOLLOWED JERUSALEM'S FALL

“ Some of our men (and this was more merciful) cut off the heads of their enemies; others shot them with arrows, so that they fell from the towers; others tortured them longer by casting them into the flames. Piles of heads, hands and feet were to be seen in the streets of the city. It was necessary to pick one's way over the bodies of men and horses. But these were small matters compared to what happened at the Temple of Solomon, a place where religious services are normally chanted ... in the temple and the porch of Solomon, men rode in blood up to their knees and bridle reins. Indeed it was a just and splendid judgment of God that this place should be filled with the blood of unbelievers since it had suffered so long from their blasphemies. So with the city filled with bodies and blood, some fled to the Tower of David, asked Count Raimond for a guarantee of their safety and then surrendered the citadel to him.' ”

(Translation from C. Krey, The First Crusade: The Accounts of Eyewitnesses and Participants, (Princeton: 1921), p257-62. The full extract is available on the `Medieval Sourcebook’ site)