QUESTIONS ARISING FROM 101st MEETING – 31/5/19
(the record of earlier meetings can be downloaded from the main Circulus page).

Sausages were not on the menu, but we discussed the various words for them, including hillae, -ārum f, botulus, -ī m (rather rare in the classical language), farcīmen, farcīminis n (the word the Circulus has employed most frequently though it was apparently used before and after rather than during the classical period) and lūcānica (or lūcāna), -ae f (a spicy variety of sausage from the Lucania region of southern Itlay. 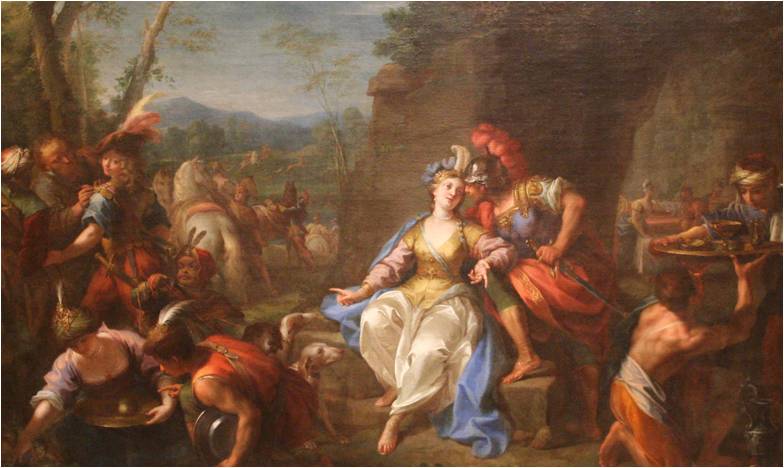 In addition to discussing briefly in Latin our daily routines, using words and phrases from the Circulus webpage (see below) we read lines 129 to 176 from Book IV of the Aeneid, covering the hunt and thunderstorm during which Dido and Aeneas make love in the cave where they took shelter. We discussed the structure of Latin hexameter verse and the controversy over whether it was read with the natural word stresses or with the stress always placed on the initial syllable of each foot (sequences of two long, or one long and two short syllables, six of which make up the line). Most scholars nowadays believe that the normal word stress was followed and that this resulted in a kin of counterpoint between stress and metrical structure, except normally in the last two feet where the two regularly coincided, producing a `DUM did-di/DUM di’ pattern, which, unlike the metre in the first four feet, can be readily appreciated by the modern Anglophone ear; for more details, download the file latin_verse.doc from https://linguae.weebly.com/courses.html. and see the discussion in the dialogue Dē Poēsī Latīnā at https://linguae.weebly.com/circulus-latinus-honcongensis.html Occasionally the accentual symmetry at the end of the line was violated, as with the final words of l.132 (odōra canum vīs, where the word stress falls on the last syllables of the fifth and sixth feet.  This discordance often signified disorder in the scene being described, in thi case presumably the dogs barking and milling around the hunstmen.

Tanya raised the question of whether Latin was a syllable-timed or stresse-timed language, i.e. whether each syllable took about the same time to pronounce or stretches of unstressed syllable were passed over more quickly to maintain regular intervals between stressed ones. In Latin verse, the answer seems to be neither of these, as two short syllables were  regarded as the equivalent of one long syllable, regardless of stress placement. Mora timing, as this system is called, came naturally with the adoption of quantative verse on the Freek pattern (see  http://www.ling.fju.edu.tw/phono/farrah/Moraic%20Phonology.htm ) but things nay have been different in colloquial speech. The very earliest Roman poetry depended, like modern English, on stress, and poetry of this type continued to be produced among the ordinary people as opposed to the literary elite. The best-known example is the cheeky verses sung by Caesar’s legions during his triumph in 45 B.C. and preserved in his biography by Suetonius:

The reference is to the alleged homosexual relationship between the young Caesar and King Nicomedes when the former was srving in Asia Minor in 80-78 B.C. From Caesar’s point ovf view the damaging part of the allegation, which was used by his enemies and which he always denied, was the suggestions that he had himself been the passive partner. The tradtion of soldiers mocking their commander at a triumphal procession may have been intended to avert the gods’ jealousy from him.
​ 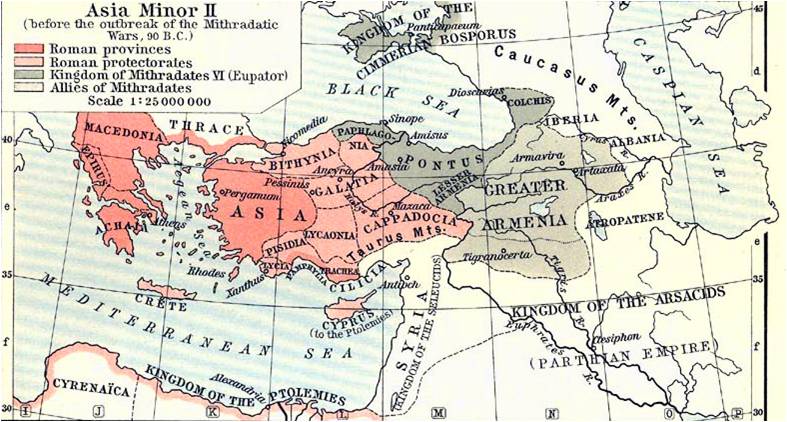 Minor linguistic issues that cropped up whilst reading Virgil included the length of the vowel followed by `i’ and another vowel. Many textbook authors and editors assume that, if the syllable including the first vowel is long then the vowel itself is also lons, and hebce write Trōia and Trōiānus. It is likely, however, that the vowel was actually short and the syllable lengthened because the `I’ was actual;y pronounced as a double consonant – so Troia and Troiānus (troyya, troyyānus). See the discussion at http://www.alatius.com/latin/quantity.html

We also noted the use of the neuter perfect particple in the `impersonal passive’, e.g. perventum est (literally `it was arrived’) for `people arrived’. The particple is distinguished grammatically from the supine, a verbal noun identical in the accusative with the neuter perfect particple but with an ablative in –ū. The accusative can be used when expressing purpose after a verb of motion (e.g. Londinium īvit rēgīnam spectandum instead of ut regīnam spectāret or ad rēgīnam spectandam for `to look at the queen’.

In addition we comented on the impossibility of determining whther vōtīs in line 158 is dative or ablative. If the former, then darī…vōtīs optat apum would means `wishes that a boar would be given in answer to his prayers’, if the latter it would be `wishes with his prayers that a boar be given to him’

There was a brief discussion of the various names of Admiralty, the district and NTR station on HK island. The English one, meaning `naval headquarters’, is a straightforward description of the area’s function in British times, and the Latin Nāvālis (Statiō) a simple translation. People were uncertain about the Chinese name 金鐘 (Gam Jung, `Golden Bell’ ) but John had read somewhere it referred to a bell that used to be rung there at midday. Subsequent investigation showed there was indeed a golden-coloured time-keeping bell (not necessarily just for noon!) at Wellington Barracks, which once stood on the site of Harcourt Garden. 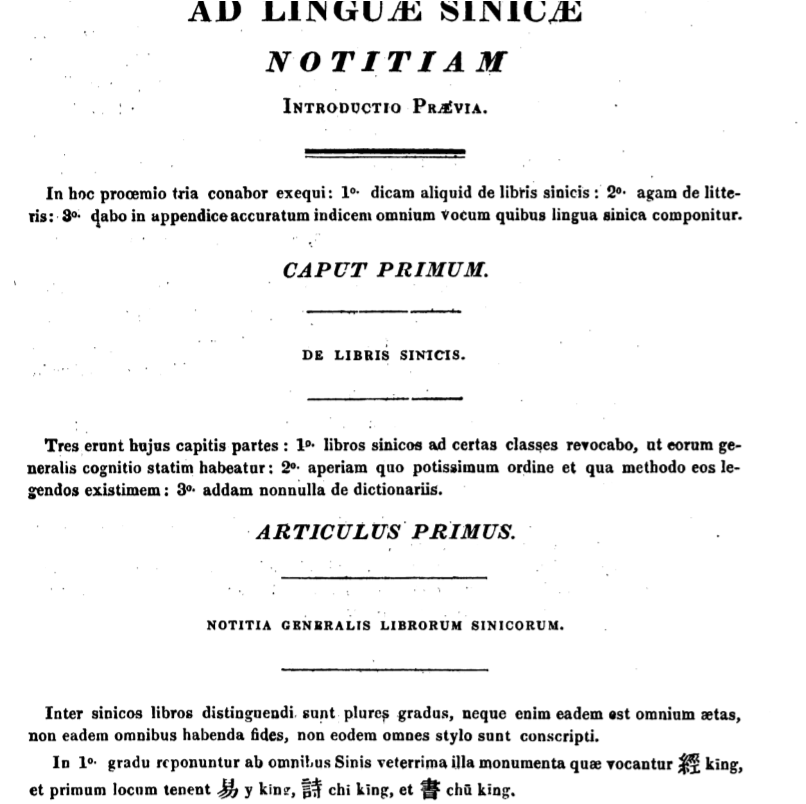 In the meeting and in subsequent correspondence, Eric gave details of Notitia Linguae Sinicae, a description of the Chinese language by the Jesuit Joseph Henri Marie de Prémare who came to China in 1698 and who is described by Joseph Needham (Science and Civilisation in China: Volume 7, The Social Background, Part 1, Language and Logic in Traditional China, p.16) as `undoubtedly the most outstanding grammarian of Chinese in the 18th century’. Prémare worked as a missionoary in Guangxi but the grammar was probably produced during his enforced retirement in Guangzhou and Macao after the papal ruling against Chinese rites resulted in the virtual banning of Christianity. The Latin text  was published in Malacca in 1831 (available at https://archive.org/details/bub_gb_iOg5lxl9Y0sC ). The 1847 English translation is at https://archive.org/details/notitialinguaes00bridgoog 1  The work includes a wealth of idioms, one of which Zhang Wei thought was the still very current 喝小酒 (Hē xiǎo jiǔm `Drink a little wine’). Eugene and Eric failed to find this particular phrase in the text but Eugene found gems such as 飲三杯..., siccare tres calices" (p. 47), "你且說怎麼該吃三杯..., dic rogo cur opporteat tres calices potare?" (p. 111) and "三杯和萬事..., omnia negotia componuntur inter scyphos" (p. 143) 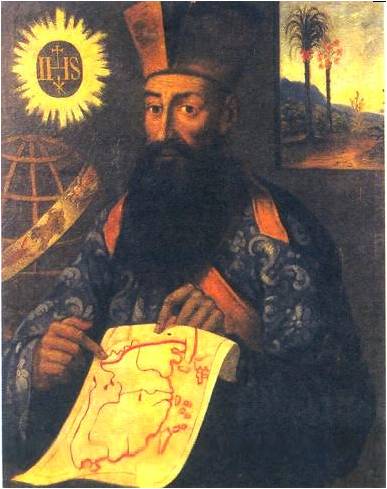 Subsequently, Eugene unearthed details of Martino Martini’s short grammar of Mandarin Chnese, which, so far as we know, is the earliest surviving one to gave been wrtiiten and to have been published. At least one Chinese grammar is known to have been produced earlier but this is not extant and was probably based on the Minnanhua spoken by the Chinese community in Malacca. Martini is best known for producing the first atlas of China (Novus Atlas Sinensis 1655) and for a history of the Manchu conquest (De Bello Tartica Historia, 1654).  His grammar was initially published in 1696 as part of a work entitled Relations de Divers Voyages Curieux and a facsimile of the copy in the Boston public library can be read at https://archive.org/details/grammaticalingua0015p  A detailed account of the various revisions the work went through is provided by Luisa Paternicò at https://www.academia.edu/543055/Paternicò_Luisa_M._2011_Martino_Martini_and_the_First_Grammar_of_Mandarin_Chinese_Hanxue_Yanjiu_vol._29_n._3_pp._229-266 and for a review of the comprehensive edition of all Martini’s work, with both Latin texts and Italian translation, see
https://www.cambridge.org/core/journals/journal-of-asian-studies/article/martino-martini-sj-opera-omnia-edited-by-bertuccioligiuliano-with-preface-by-franco-demarchi-trento-universita-degli-studi-di-trento-1998-volume-1-lettere-e-documenti-547-pp-80000-lire-volume-2-opere-minori-516-pp-80000-lire/67B141CE173689032D1922F9ADB0C446
Eugene also noted Martini’s use of the analyticalframework in Dinysius Thrax’s Greek grammar (see : https://en.wikisource.org/wiki/The_grammar_of_Dionysios_Thrax).

We will be looking at Martini's work in a later meeting, as it is is generally accessible to anyone literate in Latin and standard Chinese, though difficulties occasionally arise because in the 18th centuty Mandarin stil reflected Nanjing rather than Beijung pronunciation. John will also need to incorporate mention both of Martini and Prémare in his SINA LATINA Powerpoint (available at https://linguae.weebly.com/sina-latina.html), which at the moment only mentions Arcade Huang (黃嘉略)and Étienne Fourmont’s grammar, published in Paris in 1742.

Another subject for future discussion is the work of Stuart McManus, a new member who attended the April meeting and who has recently produced an edition of the Latin poem by a Tagalog writer Bartolome Saguinsin on the fighting beteen the British and Spanish at Manila during the Seven Years War. This is the earlest example of Latin literature produced by a native of the Philippines.

We touched on censorship on the Internet and China’s Great Firewall which is apparently blocking anything with the word `God’. In the rest of the world, reliance on automated systems to cut out obscenity can prouce annoying results, On the  CRAM platform, used by John for his flashcards since the demise of Wordchamp, Latin dīcunt (`they say’) has to be rendered dī*cunt because of the software’s misinterpretation of the second syllable. This reminded Tan of her mother’s problem as a French teacher with the word facteur (`postman’), whose pronunciation suggested an entirely different meaning to Anglophone adolescents and rendered classes uncontrollable,

On the anthropological front, Zhang Wei confirmed that traditional Chinese society followed conservative Hindus in not allowing widow re-marriage, and Tan contrasted this with Western attitudes as reflected in literature like the Widow od Bath’s tale in Chaucer’s Canterbury Tales.

Finally reverting to Rome, we noted that Robert Grave’s I Claudius and Claudius the God novels, being cast as an autobiography, did not cover the emperor’s death and subsequent deification (or apokolocyntosis (`pumpkinification’) as unkindly suggested in the satire attributed to Seneca) . Claudius does, however, acknowledge various signs that his death is imminent. We also resolved the confusion between Claufius’s wife and niece , Agrippina the Younger, who was eventually murdered on the order of her son Nero, and her mother, Agrippa the Elder, wife of Claudius’s brother, Germanicus,

NOTES
[1] The Massylians were a Numidian tribe living immediately to the west of Carthage. In the Second Punic War their leader Masinissa went over to the Roman side and was afterwards made king by the Romans of a united Numidian kingdom including the larger Masaesyli tribe who had hitherto been the Massylians’ rivals.
[2] A passive perfect particpale (literally `surrounded’) but usedm in imitation of the Greek middle voice, with an object in the accusative,
[3] Lycia was a region on the south coast of Asia Minor (see map) with its capital Xanthos standing on the river of the same name.
[4] Latona is supposed to have gven birth to Apollo and his twin sister Diana on the island of Delos in the central Aegean.

NOTES
[1] Following Homer’s usage with the similar conjunction τε, Virgil sometimes lengthens the vowel in que when is is the first of a pair meaning `both…and’
[2] An ancient tribe originally living in the Epirus region of western Greece.
[3] The Agathyrsi were a people living in what is now Romania, speaking an Indo-European language and probably of mixed Dacian and Scythian origin. The Scythian language is known to have been part of the Iranian branch but the exact position of Dacian within Indo-European is uncertain. It has been variously linked with the extinct Thracian language, with the Baltic languages (Latvian, Lithuanian etc.) or with Albanian.
[4] A mountain on Delos

NOTES
[1] The prōnuba was a married woman who escorted the bride at a Roman wedding.
[2] Literally `by going’