​QUESTIONS ARISING FROM 92nd MEETING – 10/7/18
(the record of earlier meetings can be downloaded from the main Circulus page as can the version of Ciceronis Filius with illustrations added. The illustrated text of Genesis is available on the Genesis page and of Kepler's Somnium on the Somnium page.)

Before dinner we discussed briefly in Latin the reasons why each of us had taken up the language, using dialogue from the Dē linguīs section of https://linguae.weebly.com/circulus-latinus-honcongensis.html (see below),. General cultural/lingistic interest was the most frequently offered explanation but Malcolm, Donald and John had all begun the language when it was still a compulsory subject in grammar schools and independent schools in the U.K. and students also often went on to study ancient Greek.  It was also normal then in Britin to study a modern language in addition, usually French. However, in James’s US high school in much more recent times he had to opt for either Latin of Spanish and had only been able to take up Greek at university.

After the meal we read more of Kepler’s Somnium, reaching Kepler’s footnote marker`^102’ in chapter XIII and noted the complexity of the astronomy involved, particuary the progression of the equinoxes caused by the slow rotation of the earth’s axis about the perpendicular to the plane of the elliptic (see text below). There was also brief discussion of Tycho Brahe, the Danish aristocrat whose observations were the foundation for Kepler’s own work and in particular for his famous laws of planetary motion. Someone suggested that Brahe might have been a little unbalanced mentally. A subsequent quick internet seach did not discover confirm this but recent research has suggested his death at the early age of 54 may have resuted from a combination of obesity, diabetes and alcoholism (see https://www.forbes.com/sites/kristinakillgrove/2018/05/24/skeleton-of-famed-astronomer-tycho-brahe-finally-reveals-cause-of-death/#5f1433641fd4 )

We discussed when Europeans began the regular use of cutlery (other than knives for cutting up food), It was suggested this was in the 16th century, but the first use of a fork at table may have been a lot earlier and Americans apparently did not follow until the 1800s (https://www.quora.com/When-did-Europeans-start-using-forks-knives-and-spoons-to-eat )
Someone mentioned that eating spaghetti with the hand had been common everywhere until the 19th century 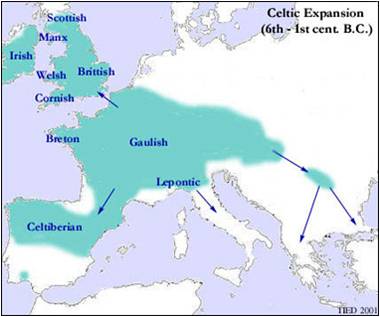 ​Another topic of discussion was the Celtic languages which were dominant over much of Western Europe until their large-scale displacement by Romance and Germanic. The common Celtic spoken, presumably with dialect variation, over most of Britain is referred to today as Brythoneg, from which derive Welsh, Cornish and Breton, the last of these being brought into Britanny by refugees from Britain itself, who may have been fleeing from the advance of the Anglo-Saxons.  Scottish Gaelic, still spoken natively in isolated communities in the far west of Scotland and the adjacent islands, and Manx, once the dominant language on the Isle of Man, are derived, like modern Irish, from the old Irish language and the modern tngues remain to some extent mutually comprehensible.. The map below showing where Celtic languages are spoken today is a little misleading because the dominant language of most of the areas shown is English, even though Irish and Welsh are co-official languages with English and around 20% of Welsh people still acquire Welsh naturally in the home and community rather than through formal schooling. Note that the names of contries and regions are given in the relevant languages: Alba, Eire, Mannin, Kernow and Breizh for Scotland, Ireland, Isle of Man, Cornwall and Britanny respectively. 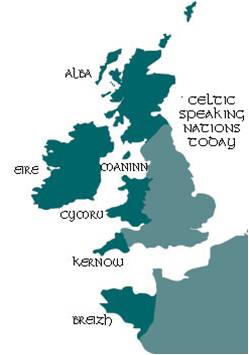 Mention was made of the Satyricon, a kind of novel traditionally ascribed to Nero’s `arbiter of excellence’, Gaius Petronius, of which a small part has survived, giving us some insight into the lives of lower-class Romans and the `Vulgar’ Latin which they spoke and from which the modern Romance languagesdeveloped The narrator, the ex-gladiator Encolpius, is in a homosexual relationship with his slave Giton, complicated when his friend Ascyltus decides to make it a triangle. All three are involved in plenty of heterosexual activity as well. See the synopsis and discussion at https://en.wikipedia.org/wiki/Satyricon and the full Latin text at http://www.thelatinlibrary.com/petronius1.html

The best-known section is the Cena Trimalchionis (`Trimalchio’s Dinner Party’), which lampoons th pretensions of the nouveau riche freedman Trimalchio and also provides the framework for various anecdotes, including the story of the centurion/werewolf presented, in simplified form in stage 7 of the Cambridge Latin Course. The original of the werewolf tale is given with a translation at https://linguae.weebly.com/circulus-latinus-honcongensis.html in the Dē Lemurālibus antīquīs hodiernīsque section, whilst the frame story of the banquet itself forms the model for the dinner given by Haterius in Book IV of the CLC.

Petronius’s work with its scandalous contents was adapted into a well-known film of the same title by the Italian director Fellini in 1969 and Malcolm also mentioned the novel by Julin Mitchell, The Unknown Country, the second half of whih is preented as if based on a manuscript of a modern version of the story, See for more details the review at- https://www.theguardian.com/books/2010/aug/29/julian-mitchell-undiscovered-country-review

Poster for the Fellini film  -https://en.wikipedia.org/wiki/Fellini_Satyricon
​
We talked briefly about Hungaran, a non-Indo-European language, regarded as partcularly difficult, partly because of the system of vowel harmony which necessitates substantial changes to loan words.The language is agglutinative, i.e makes use of suffixes to show the grammatical function of words, but, in contrast to inflected languages like Latin, there is generally just one suffix per function

We finally noted how English, before the Norman conquest in the 11th century, used, like German and Chinese, to prefer calques (words formed from native roots by translating each element of a foreign one) to loan words (foreign terms simply imported wiht mnor modifications to fit English phonology). The contrast is illustrated in John’s INTRODUCING LATIN PowerPoint (available at https://linguae.weebly.com/latin--greek.html) , which presents both the actual wording of the Preamble to the US Declaration of Independence with the `Anglish’ version, in which all Romance-derived terms are replaced by purely Old English (Germanic) ones. For `Anglish’ itself see http://anglish.wikia.com/wiki/Main_leaf


THE DECLARATION OF INDEPENDENCE

The unanimous declaration of the thirteen United States of America.

When in the course of human events, it becomes necessary for one people to dissolve the political bands which have connected them with another, and to assume among the powers of the earth, the separate and equal station to which the Laws of Nature and of Nature's God entitle them, a decent respect to the opinions of mankind requires that they should declare the causes which impel them to the separation.


THE SAYING FORTH OF SELF-STANDING

When in the flow of mannish happenings, it becomes needful for one folk to break up the mootish bands which have bonded them with another, and to take among the mights of the earth, the freestanding and even post to which the laws of life and of life’s God give them the right, a good worth to the thoughts of mankind must needs that they should say forth the grounds which bring them to the sundering.

NOTES
[1] The different figures Kepler gives are for solar and sidereal time respectively, the latter varying slightly from the former because of the shifting position of the earth’s axis. Discovery of the distinction and of the consequent shift in the date of the equinoxes is usually attributed to the 2nd. Century B.C. Greek astronomer Hipparchus.
[2] Kepler has somehow got this the wrong way round. Sunrise for the Subvolvans occurs when the sun begins to illuminate their side of the moon (i.e. at the first quarter) and for the Privolvans at the last quarter.
[3] Kepler explains in his own note 99 that these lines correspond to earth’s meridians (i.e. lines of longitude) but he has in mind only the two lines down the centre of the two hemispheres (viz the side of the moon facing the earth and the one opposite it.)

NOTES
[1] i.e. the sun is precisely overhead at the lunar equator on the moon’s mid-summer and mid-winter days. The inclination of the moon’s axis to the plane of the elliptic is only 1.5° compared with the earth’s 23.5° (https://www.space.com/55-earths-moon-formation-composition-and-orbit.html) so the apparent north-south movement of the overhead sun through the year is only 3° as against 47° on earth and the difference between seasons is minimal, as Kepler notes in the next paragraph.
[2] i.e. in any one place the apparent position of the sun against the zodiac at mid-summer will shift by 180° over ten years.
[3] Referring to the moon-dwellers
[4] Because the moon revolves only once a month.