QUESTIONS ARISING FROM 86th. MEETING – 24/1/18
(the record of earlier meetings can be downloaded from the main Circulus page)

We discussed briefly the demise of the monarchy in Nepal and John confirmed that it had been formally abolished in 2008, when Gyanendra, the last king, who had already been stripped of his political powers after the 2006 protests, was compelled to leave the royal palace. Though personally convinced that Gyanendra had not been involved in the murder in 2001 of his brother Birendra and eight members of his family, John though that the majority of Nepalis still believed he was behind it. However, the Nepali waiter with whom we then checked said that most educated people in Nepal no longer believed the accusation. There is brief background information in the summary of recent Nepalese history at https://linguae.weebly.com/nepal-1964-2014.html, and a fuller account in John’s History of Nepal (see the preview at https://www.amazon.co.uk/History-Nepal-John-Whelpton/dp/0521804701/ ). For some of the reasons for Nepali scepticism over the official account of the killing, see the article by two Nepali academics at
http://digitalcommons.macalester.edu/cgi/viewcontent.cgi?article=1678&context=himalaya

There were queries about the Latin for `open up a can of whipass’ (American slang for talking in a way that exposes you to violence) and also for the simple phrase `I’m full!’ as uttered when you can’t eat any more. Probably the latter is best rendered sum satur, as satur, -ura, -urum means `full, satiated.’  For the former, perhaps in periculō incidere nē vapulēs (`come into danger that you’ll be thrashed’) is best, though lacking the colour of the original.

We did not have time to tackle Genesis 14 but read the account of snow castles and snow fights in 16th century Scandinavia in chapter 23 of Book 1 of Olaus Magnus’s Historia de Gentibus Septentrionalibus (see the text below). Magnus was a Swedish Catholic cleric, who was exiled during the Reformation and died in Rome in 1557, two years after the publication of his great work, which combined accurate observation with tall tales and remained the standard account of Scandinavia for many years.The extract had come to John’s attention when it was published on www.latinitium..com, a relatively new site run by two Swedish Latinists. Among the many useful resources they have uploaded is a digitalised, user-friendly version of the Smith-Hall English-Latin dictionary, the best guide available for any Anglophone wishing to write in classical Latin.

Magnus’s text includes a description of punishments suffered by those who try to escape from the mock battle, including having snow pushed down the back of their necks. The section concludes with the words Et haec omnia veluti voluptuōsa spectācula ad irrogandum rebellibus, et stupidīs mītiōrēs pœnās, and Kelvin pointed out that, given classical Latin’s general preference for the gerundive rather than the gerund, ad irrogandās rebellibus et stupidīs mitiōrēs poenās would be better style.. The English translation would in both cases be the same: `to inflict relatively light penalties on rebels and on the slow-witted.’ John wondered if the verb faciunt needed to be supplied, so the whole sentence would mean `And they do all this as an enjoyable spectacle – relatively light punishment for infliction on rebels and the slow-witted’, but on reflection this would be rather awkward. We noted also that the comma after rebellibus, like much of the punctuation in printed books of this period, seemed rather eccentric. 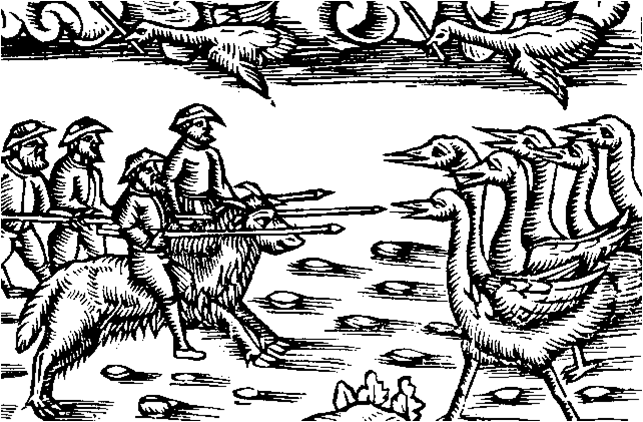 A battle between dwarves and cranes which Magnus imagined taking place in Greenland
https://commons.wikimedia.org/wiki/File:Hdgs_Cranes_fighting_Dwarfes.gif

We discussed the reference to the youngsters showing as much enthusiasm in their mock battles as if they were actually fighting prō patriā, prō lēgibus, prō focīs (ut dīcitur) et ārīs (`for native and, laws, hearths (as the saying goes) and altars’). `Hearths’ is probably just used instead of `homes’ though someone wondered if it might have a specifically religious connotation, as with the flame of Vesta which was kept burning continuously in Rome. Also of interest was the use of āra, which normally denoted a pagan rather than Christian altar, the latter being usually referred to as altar

The assault on the snow castle included burrowing like rabbits (cunīculus, -ī m) into the base of the fortifications and John pointed out that the noun was also used for tunnels or holes in general. Chris wondered whether there might be an etymological connection with cunnus (female genitals). There seems to be no common ancestor but the similarity of cunīculus and the Anglo-Saxon equivalent of cunnus had an interesting effect on the development of English vocabulary. Because the rabbit is not indigenous to northern Europe, there is no native Germanic or Celtic name for it. In the 12th century English adopted `coney’ derived through Anglo-French from cunīculus while the word` rabbit’, which is of unknown origin, came into use in the 14th century to refer just to the young of the species. In the 19th century the meaning of `rabbit’ was broadened to include the adult animal and largely supplanted the older term, seemingly out of embarrassment over the homophony of coney with cunny, which was a variant of `cunt’. The replacement of coney was not, however, total:

Discussion of cunīculus led on to mention of Catullus 16, the most notoriously obscene work in the poet’s output. This is a humorous rebuke to his friends who had criticised the supposedly unmanly nature of his writing about his girlfriend `Lesbia’, and (in)famously begins:

The standard treatment of obscenity in Latin verse is James Adam’s The Latin Sexual Vocabulary, which can be partially previewed at https://books.google.com.hk/books?id=GDP9VHGbF1AC For the terms Catullus applies to his friends, there is useful information at https://en.wikipedia.org/wiki/Homosexuality_in_ancient_Rome The Romans  did not have any term corresponding precisely to `gay’ or `homosexual’ because, for their society,  the crucial distinction was between `active’ and `passive’ sexual roles rather than the gender of one’s partner, A pathicus was a male who submitted to having penetrative sexual acts performed upon him, whilst cinaedus was often used in the same sense but could also refer to `unmanly’ behavior in general.  The stigma attached to accepting the passive role in sexual intercourse was so great that in the 2nd. century B.C. Roman soldiers thought to have willingly accepted it were clubbed to death by their comrades.

John mentioned the coyness which led some translators of Greek texts to render more explicit passages in Latin rather than English, as was the case with the Loeb edition of Longus’s Δάφνις καὶ Χλόη (Daphnis and Chloe), written in the 2nd century A.D. He recalled how as an undergraduate he took advantage of this to skim through the novel locating the racier bits. He also mentioned a brief list of the commonest Latin obscenities, which he supplied to students on request.

We discussed briefly another neo-Latin text, Johannes Kepler’s Somnium, an early work of science fiction serving also as a treatise on astronomy as it would appear to a lunar observer. Kepler, best-known for formulating the laws of planetary motion that were an important step towards Newton’s theory of gravitation, had at one point to take himself away from his studies to mount a successful defence of his mother who had been accused of witchcraft. Such accusation were common in the 17th century, seemingly because, amidst the religious conflicts triggered by the Reformation, both Catholics and Protestants sought to boost their grassroots popularity by endorsing the accusations against neighbours which had long been a part of village life.
Kepler’s dual role both as a pioneer of the modern scientific revolution and as a man caught up in a world of intolerance and superstition have made him an attractive subject for modern writers. Malcolm mentioned the fictionalised account of his life (https://www.amazon.com/Kepler-novel-John-Banville/dp/0679743707) by Irish novelist John Banville, who is best known for a later novel, The Sea, which won the Man Booker Prize in 2005 and must be carefully distinguished from Iris Murdoch’s novel The Sea, the Sea! The most reliable translation of Somnium itself is by Edward Rosen, and the partial preview at https://books.google.com.hk/books?id=OdCJAS0eQ64C includes the whole of the narrative though only a part of the extensive notes which Kepler himself added to his text. There is a full but less accurate translation at https://dspace2.creighton.edu/xmlui/handle/10504/109241 and the complete Latin original is at https://archive.org/details/operaomniaedidit81kepluoft  A paragraph by paragraph bilingual text is currently being built up on the `Somnium Project’ site (https://somniumproject.wordpress.com/)  and John is working on a text with interlinear translation and brief notes for his Advanced Reading Group. Finally, Ulinka Rublack has recently published The Astronomer and the Witch an account of Kepler’s fight to save his mother’s life, based on an examination of the original court documents preserved in Stuttgart. There is a brief account of her findings at https://www.theguardian.com/books/2015/oct/21/the-astronomer-and-the-witch-johannes-kepler-mother-katharina-witch-trial

In a discussion of alcoholic beverages Chris mentioned that absinthe was outlawed at one time in France. It turns out that there was for many years a ban on the drink throughout much of Europe as well as the USA because it contains thujone, which is a dangerous poison when ingested in large quantities. The ban was eventually lifted when it as realised that for the thujone to do any real harm you would have had to drink so much of the liqueur that you would already be dead from alcoholic poisoning! More details are at https://mic.com/articles/50301/why-was-absinthe-banned-for-100-years-a-mystery-as-murky-as-the-liquor-itself#.zSfvpqjSJ
Chris also mentioned the tremblement de terre (earthquake, mōtus terrae) cocktail, which consists of equal parts of absinthe and cognac and is said, probably apocryphally, to have been invented by the late 19th century French painter Toulouse-Lautrec. More about this on the website of the delightfully named Institute for Alcoholic Experimentation:
http://instituteforalcoholicexperimentation.blogspot.hk/2010/10/earthquake-cocktail.htm 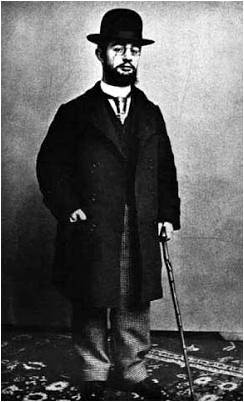 Continuing on the topic of intoxicants, John mentioned his unpleasant experience with cannabis, which was legally available in Kathmandu in the early 1970s and which he tried a couple of times. The result was to induce feelings of paranoia, with those around him appearing to rear up menacingly, almost like snakes. Thereafter he left the drug alone but later in North India was given what appeared to be a soft drink but was actually bhang – a cannabis-based  beverage very popular in the region. This, too, led to delusions of being endangered, a reaction which others have also encountered; see http://www.bbc.com/travel/story/20170307-the-intoxicating-drug-of-an-indian-god  Malcolm had also suffered the unnerving result of being given a drug without realising it – in his case LSD, which had an even worse result. All in all, good reason to stick with beer and red wine!

Finally, there was a brief discussion of how pejorative the words `nerd’ and `geek’ are. This arose from mention of `Alatius’, Swedish Latinist Johan Winge, who produced the digitalisation of the Smith-Hall dictionary mentioned above and also a demonstration of hexameter rhythm (https://www.youtube.com/watch?time_continue=5&v=uoD0vjQidrc), which John regularly uses in classes and which occasioned the comment `What a nerd!’ from one student. Nerd-like or not, Alatius himself points out that the demonstration is deliberately mechanical to bring out the basic architecture of the verse and his own personal website (http://alatius.com) includes three very useful resources: a macronizer which adds vowel length marks with a high degree of accuracy , a digitalised version of Lewis& Short’s Latin-English dictionary (similar too but probably with fewer errors than the better-known Glossa portal).

NOTES
[1] This term might refer instead to army recruits, the original meaning of the word tīrō, tīrōnis m, from which tīrōcinium derives,
[2] Referring to the Roman `testūdō,’ a formation in which soldiers held their shields over their heads.
[3] The preposition ad should probably be supplied before eadem impugnanda to give the meaning `in order to storm the same

NOTES
[1] This sentence might just refer to the lesser penalty of drops of freezing-cold water on the head rather than to thrusting snow down the back of the neck, thought it is possible both varieties of punishment are being referred to, in which case mītiōrēs should be translated as `relatively mild’ or `quite mild’.
[2] The meaning is presumably `This custom has perhaps been described here at greater length than is proper, since to some it may seem simply ridiculous (which I do not deny) and not worth putting down on paper