The Word files below gives the text of the extracts in Wheelock's Latin Reader from Book 1 of Ab Urbe Condita covering the foundation of Rome, the conflict between the Horatii and the Curiatii, the end of the monarchy and Hannibal and  the Second Punic War to the aftermath of the Battle of Cannae (216 B.C.). Interlinear glossing in English has been added, together with some notes and illustrations. The first file goes up to Hannibal's crossing of the Alps and the second deals with the fighting in Italy. They should be used in conjunction with the notes in the Wheelock volume itself.  The PowerPoint introduces Livy and his account of Hannibal and the Second Punic War. 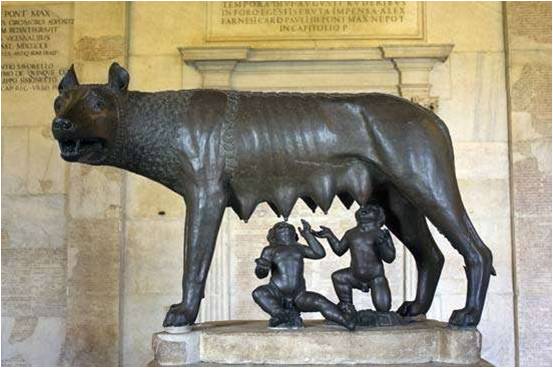 The  bronze `Capitoline Wolf’, once thought to date from the 5th cent. B.C, but now believed to have been sculpted in the 11th or 12th. cent. A.D.[1]
https://www.britannica.com/biography/Romulus-and-Remus
​
The `Comitia Centuriata'  (`Centuriate Assembly') which Livy refers to was in origin the Roman army acting as a political body and under the republic was responsible for electing the consuls, praetors and censors as well as possessing some  very limited judicial and legislative powers (at least from the 2nd. century B.C. laws were normally  enacted by the `Concilium Plebis'). The centuries of which the Comitia Centuriata  was composed separated after the issue for decsion had been anounced into fenced off areas for members to cast individual ballots and the whole century then cast a single vote in the re-convened assembly.  The centuries were divided into classes on the basis of property qualifications and the system was weighted so that the centuries containing wealthier citizens had more influence. The number of centuries was increased and the assembly made slightly more egalitarian in the 3rd century B.C. but under Augustus its powers were transferred to the sentate. For further details see https://en.wikipedia.org/wiki/Centuriate_Assembly ,  Lily Ross Taylor, Roman Voting Assemblies: From the Hannibalic War to the Dictatorship of Caesar (1966) and Andrew Lintott, The Constitution of the Roman Republic (1999). 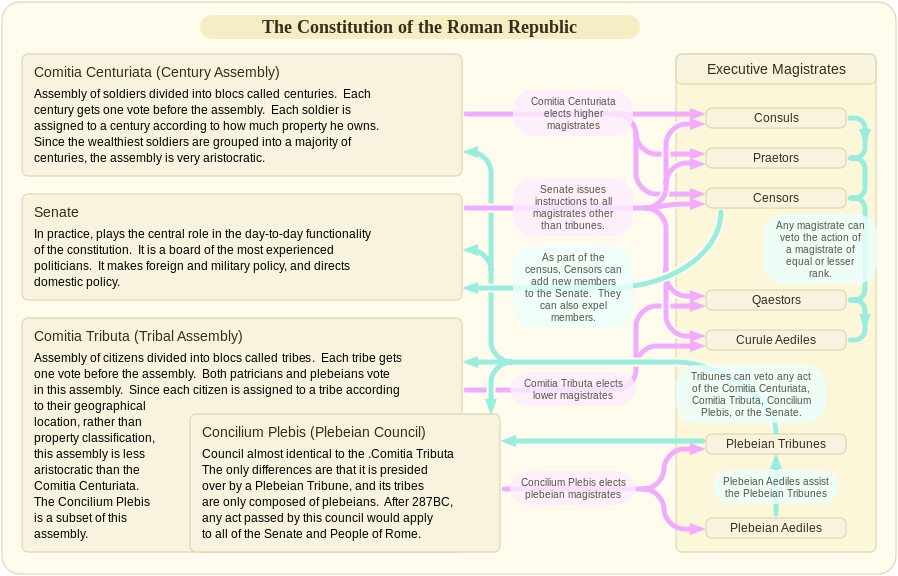 zThe diagram above summarises the conventional view of the different assemblies and their functions but some historians reject the distinction between Comitia Tributa and Concilium Plebis and believe there was only one tribal assembly (see the discussion at https://en.wikipedia.org/wiki/Tribal_Assembly). There was also an even older assembly, the Comitia Curiata, in which the voting blocs were the thirty curiae (`wards')  which Romulus had supposedly established and which retained a few, mainly ceremonal functions in later times. The word `curia' also denoted the building in which the senate met and is still used today to refer to the Vatican-based government of the Roman Catholic Church.
The Comitia Tributa represented the separate tribes, originally geographical divisions,  which Servius Tullius, the sixth king of the city, was believed to have instituted.  The number of tribes by the end of the republicn period was 35 and, even though under the empire the Comitia Tributa's functions were merely symbolic, all Roman citizens continued to be assigned to a tribe, whose name would be mentioned in formal contexts such as tombstone inscriptions.
The Comitia Curiata met in the Comitium, an area adjacent to the forum, the Comitia Tributa sometimes here and sometimes on the Campus Martius across the Tiber and the Comitia Centuriata regularly on the Campus Martius.  Latin comitia is the plural form of the 2nd declension neuter noun comitium
​