QUESTIONS ARISING FROM 91st MEETING – 15/6/18
(the record of earlier meetings can be downloaded from the main Circulus page as can the version of Ciceronis Filius with illustrations added. The illustrated text of Genesis is available on the Genesis page and of Kepler's Somnium on the Somnium page.) 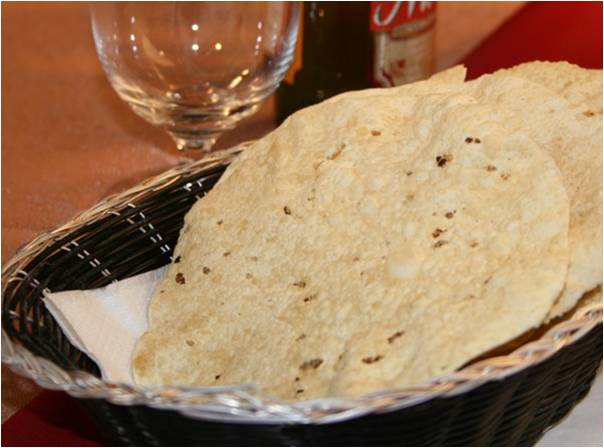 Malcolm introduced us to the relatively new site http://bookconcierge.hk/, which lists in order of cost (including shipping to Hong Kong) all the main on-line booksellers stocking a particular title. The cheapest option is normally Book Depository, but not invariably, and John also ponted out that, for bulk orders, Amazon sometimes worked out cheaper.

Malcolm had used the site before ordering a copy of Ursus Nomine Paddington (i.e. A Bear Called Paddington), a translation of by Peter Needham, who taught Classics at Eton for thirty years and has also produced Latin versions of the first two Harry Potter novels (Harrius Potter et Philosophi Lapis and Harrius Potter et Camera Secretorum), which we discussed in the July 2017 meeting. As we noted then, there is a long-standing tradition of translating children’s classics, the best known of which, Winnie Ile Pu, actually made it onto the New York Times best sellers’ list. For more details on this topic see http://mentalfloss.com/article/73311/10-popular-childrens-books-have-been-translated-latin

Eugene had brought along a copy of the Italian version of Lingua Latina sine Molestia (Il Latino senza Sforzo), an audio-lingual course in the Assimil series, with accompanying CDs.  This textbook is unfortunately no longer available in an English edition, though I think French and German versions are stil in print. The book is used by the well-known champion of spoken Latin Aulus Gratius Avitus in his on-line Schola Latina Europaea et Universalis (see http://avitus.alcuinus.net/schola_latina/), which provides free instruction, and special guidance for English speakers struggling without a translation in their own language! Avitus, who I think is Spanish by birth, is also the founder of the Circulus Latinus Londoniensis, a more rigorous society than our own as they generally enforce their Latin-only rule, though, like us, they always meet over food and drink. Avitus has recently published a very useful survey in English of
Thwe whole spoken Latin scene, which included refers to Circuli Latini in general as `spread from Seattle to Hong Kong’ and can be downloaded from
https://www.cambridge.org/core/services/aop-cambridge-core/content/view/ED66CC496B5BD893A4C519ABF6A257F3/S2058631018000065a.pdf/spoken_latin_learning_teaching_lecturing_and_research.pdf 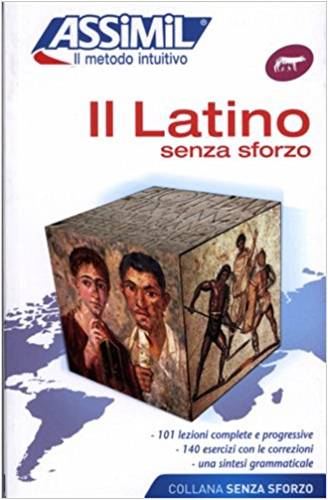 ​We each spoke briefly in Latin about the advantages and disadvantages of life in Hong Kong, using as support the dialogue form the Circulus page reproduced below (the web page itself, with stress indicated, is at https://linguae.weebly.com/circulus-latinus-honcongensis.html ) Jesse wanted to refer to the wide variety of toys and games available in the shops here, which led to a discussion of the best word for toy. There are specific words for a doll (pupa) and a children’s rattle (crepundia) but the words oblectāmentum and lūdibrium offered by some dictionaries seem to have been normally used in classical Latin as abstract nouns meaning `amusement’, `entertainment’ etc. However. ioculus, -ī m, though also employed in the abstract sense, does also seem to have been employed in the concrete sense and is probably the best choice. 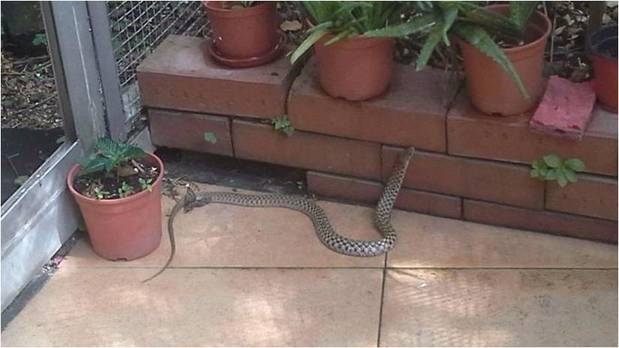 Following on from mention of the countryside and hiking as important attractions, there was a discussion of encounters with snakes, of which Hong Kong still boasts a wide veriety. Tanya had recently discovered one alive but pinned down by rocks which neighbours had piled on it. She took it by the tail and effected a rescue, resulting in the dual gratification of an adrenaline flow and an an enhanced karma balance. Malcolm, who has a house in Chi Ma Wan, the Lantau peninsula where snakes are particularly common, told us how he had once jumped over a green snake on the path – something he realised later was rather foolish as it might have been a venomous bamboo snake rather that a harmless `Green’ (see photos below); the former is supposedly identifiable by a yellow stripe on the underside but in the picture above both species appeas to have some yellow on their skin, with the venomous one distinguishable just by its yellow eyes. Malcolm had also once had the unnerving experience of coming across a Chinese cobra in attack position, which had been masked by a boulder as he ascended steps on a hillside. 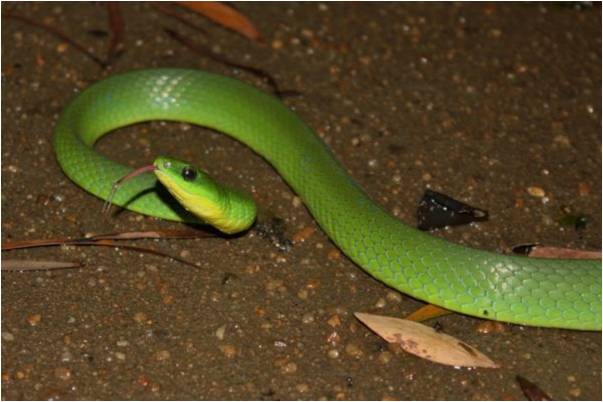 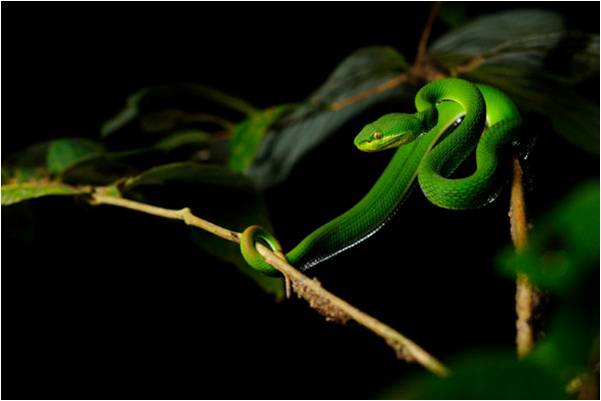 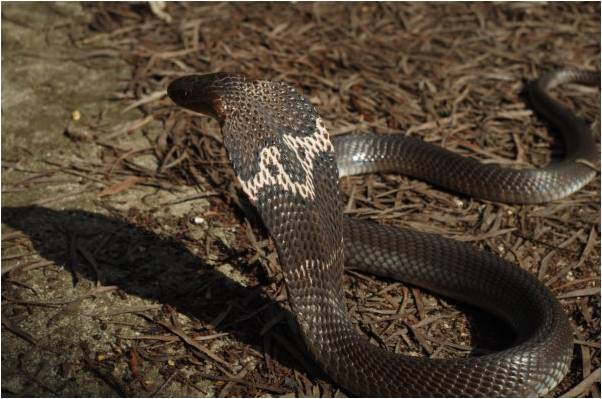 Whilst the bamboo snake is responsible for 90% of the snake bites in Hong Kong, the most venomous is the king cobra, which can grow as long as 6 metres. Malcolm had believed that there were none of these left in Hong Kong but the compilers of the guide at http://www.southside.hk/southsides-guide-common-snakes-hong-kong/ claim that, though possibly extinct on Hong Kong island, they can still be found throughout the New Territories. They normally steer clear of humans,  which presumably explains the uncertainty over the size of their population.

Whilst the bamboo snake is responsible for 90% of the snake bites in Hong Kong, the most venomous is the king cobra, which can grow as long as 6 metres. Malcolm had believed that there were none of these left in Hong Kong but the compilers of the guide at http://www.southside.hk/southsides-guide-common-snakes-hong-kong/ claim that, though possibly extinct on Hong Kong island, they can still be found throughout the New Territories. They normally steer clear of humans,  which presumably explains the uncertainty over the size of their population. 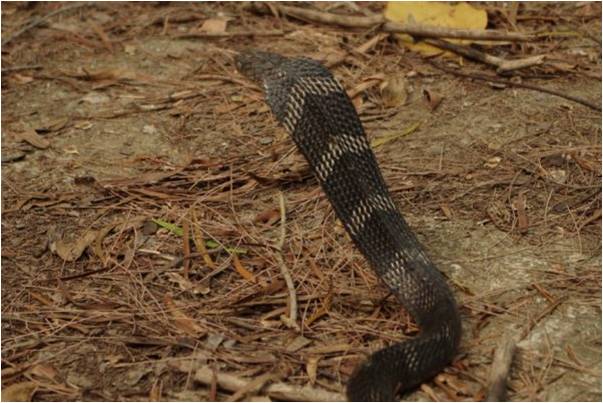 ​Unnerving as some of the above may be, we have the consolation that, according to `Southside’, there have been no fatal bites for the last twenty years and John reckons that, despite being a keen hiker, he has only seen snakes about ten times in thirty years. The largest was in a rubbish bin near Yuen Long – probably a Burmese python but he did not choose to go close enough to investigate! 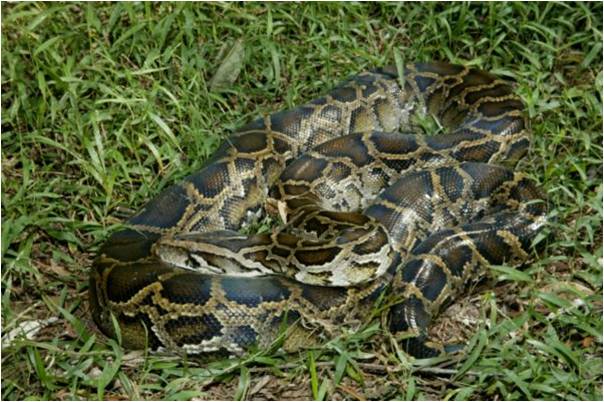 Bamboo python (python bivittatus)
​
We touched briefly on vocatives like Eugenī, formed by cutting off the-us at the end of 2nd. Declension nouns.  John was a little uncertain but thought that the stress on such forms was always on the same syllable as the nominative (e.g.Eugénī, vocative of Eugénius) even if this resultd in accentuation of a short penultimate syllable. A later check confirmed that this was correct and that the contracted genitive of nouns in –ius was accented in a similar way. See
http://www.perseus.tufts.edu/hopper/text?doc=Perseus%3Atext%3A1999.04.0001%3Apart%3D1%3Asection%3D9

We finally read chapters VIII-XI of Somnium (see below and https://linguae.weebly.com/somnium.html, the web page including illustrations.) John noted that the accusation of witchcraft brought against Kepler’s mother might have been partly the result of his inclusion of `spirits’ in his story and of his narrator bewing the son of a woman with some of the qualities associated with witches. Since the narrator is portrayed as studying under the Danish astronomer Tycho Brahe, as Kepler himself had done, the story, drafts of which were in circulation by around 1611, might have been interpreted as partly autobiographical

The narrative includes a description in chapter IX of how thew bodies of humans `taking of’ for transport to the moon hav to be spread out so that the force exereted on them is evenly distributed. John had added a note comparing this with the recommendation that someone in a freely falling lift could minimise the impact at the bottom by lying stretched out on the floor. Malcolm trhough this was correct and that the best policy was to jump up and down to have a chance of being in the air when impact occurred. A `Lonely Planet’ video located later by Tanya, argues that this second method is of little use because the jumper’s velocity relative to the lift would be so slight compared to that of the lift itself hurtling  towards the ground, It recommends instead bracing oneself again the rails on the side of the lift and slightly bending the legs (see https://m.youtube.com/watch?v=9Y-i4NS70MY). Comments posted beneath the video point out that the whole `falling lift’ scenario is highly unlikely since the counter weight would keep the lift stationary or even make it move upwards if the power failed.

[1] The term German mile`(miliāre Germānicum) was used for several measure of distance but Kepler’s own note 53 explains he is using the `German geographical mile’, defined as 1/15 of a degree of longitude at the equator, or approximately 4.61 English miles. 50,000 of these units is equivalent to 230,545 miles, compared with the 238,855 mile actual average distance of the moon from the earth.
[2] The phrase pānis biscoctus is used by Marco Polo for wafers made by the inhabitants of the Arabian peninsula from salted fish but here presumably means `hardtack’, i.e biscuits or crackers made from flour and water, which were staple food for sailors at this time. Kepler himself lived very frugally and enjoyed gnawing on bones and hard crusts (see Rosen, Kepler’s Somnium, p.15, n.17).


[1] The conjunction antequam is here split between the two clauses and ante itself changed to anteā (afterwards). The whole sentence would most naturally be translated `As we are so busy, there is no agreement to go until a lunar eclipse has begun’ but `there is agreement not to go before the start of an eclipse’ makes better sense.’ During such an eclipse, the moon remains within the earth’s shadow for about four hours.
[2] nostrī is genitive of object. Only those most devoted to the demons can accompany them.
[3] For this reason, the advice or someone trapped in a free-falling lift is to lie stretched out on the floor to minimise the effect of the impact at the bottom.
[4] i.e the demons deal with the first problem (the coldness of space) with their innate magic powers  and with the latter (difficulty of breathing) by using sponges.

[1] ut ambulent is a subjunctive result clause: `quite a bit later they recover to the extent that they can walk about.’
[2] Kepler explains in his own note that this event (lunar nightfall) occurs about a week after the lunar eclipse during which they arrive. For a lunar eclipse to occur the earth must be in exact alignment between moon and sun, which can only happen at full moon. i.e. when it is mid-day on the side of the moon facing earth.
[3] plērumque (generally, frequently ) seems an odd word to use of solar eclipses but Kepler’s note refer to these being more frequent than lunar eclipses.

[1] i.e. `Let this be enough about the journey.’
[2] The Subvolvans (`those under Volva [i.e. the earth as seen in the lunar sky]’) are the inhabitants of the side of the moon always turned towards earth and the Privolvans (`those deprived of Volva) live on the far side. Kepler explains in his notes that he chose the name `Volva’ because, unlike the moon itself in our sky, the earth as seen from the moon is turning (volvere) continually.
[3] The solstitial colure is an imaginary circle around the earth passing over the poles and through the points on the zodiac at which the sun appears to be at the winter and summer solstices. This intersects at right angles at the poles a similar circle through the apparent locations of the sun at the vernal and autumnal equinoxes