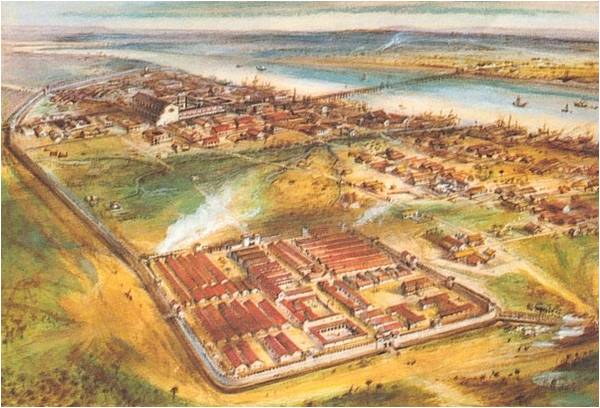 Armand D'Angour on the name `Londinium' and
poetry celebrating the city
(from: www.armand-dangour.com/wp-content/uploads/.../Londinium.doc... (downloaded 13/5/16).

There’s a problem with Londinium, the Latin name for London. How should it be pronounced?

I had always assumed the first i was short, and was happily toying with the idea of ending a Sapphic stanza with the word ‘Londinienses’ (the metre would require that i to be short) – when I read a comment by Bijan Omrani, classics teacher at Westminster School and versifier: ‘Unfortunately Londiniensis doesn’t scan in sapphics’.

I consulted my Latin dictionary of choice, Lewis and Short, and it corroborated Bijan’s view (indeed, he probably got it from there). They mark that i long – Londīnium.

But how did they know that, I wondered? The only references they give are to Latin prose writers (Tacitus, Pliny), who give no indication of the quantities. It didn’t make sense that a name which ended up with a barely vocalised final syllable – Lund’n - should once have had a long one in that place. If it had, it would surely have mutated into something like Londine (pronounced Lundeen). I decided that I would keep a short i in the Greek form of the word (which is found in Ptolemy) when I composed my Olympic ode in alcaic stanzas.

Following the publication my Ode, I received a message in August out of the blue from Kwasi Kwarteng, a former Eton scholar, classicist, and now Member of Parliament. He wrote:

The scansion of Londinium is interesting. Lewis and Short have the first i as long in Tacitus. I wrote an asclepiadic (Latin) Olympic poem with a shortened i, on the grounds that I am a Londoner and should be given some freedom in the scansion of the name of my own city. It also reflects the pronunciation better. You, using Greek, have even more licence.

My own Latin Olympic poem, written for my own amusement, was in asclepiads like Horace Odes 1.1 ‘Maecenas atavis edite regibus’... there are probably lots of howlers, but few metrical slips I hope.

Actually I find no howlers – it is an excellent composition, and I reproduce it here:


I wrote back, wondering if Lewis and Short simply make that i long by analogy with Lavinium and Corfinium. In both these cases, we know the first i is long because the names occur in verse (in Virgil and Lucan). It's not clear that we could know for certain what the correct quantity of the only other Roman towns with that ending that I can find should be – Aeminium, Bilachinium, and Corinium.

I mentioned this to Colin Leach, veteran classicist and versifier, who took a pragmatic approach:

(All Londoners extol your aims,
since worldwide honour to the Games
you furnish, Armand, with your ode
created in Alcaic mode.)

The only thing left was to ‘phone a friend’. I dropped a note to the world expert Oxford philologist John Penney, feedback on whose riveting lectures once included the phrase ‘Penney’s from heaven’.

I cannot imagine why L & S mark the i as long, and I don't in any case believe that they would be right to do so.  There is, as far as I can see from all the attestations listed in Holder and Rivet & Smith, nothing to suggest that the vowel is long. In principle one should be able to tell from the form in which the name is borrowed into Old English, but OE Lunden in fact points to earlier *Lu:ndonion (: is a mark for vowel length), which is probably from *Lo:ndonion, with a treatment of the *o: that is variously ascribed to Vulgar Latin or to native British speech  habits.

Some would account for the Londinium form as arising by dissimilation from the vowel of the first syllable (o...o > o...i), others as arising by attraction to the vowel of the third syllable; but others suppose that these are just different suffixes. Nothing in all this supports a long i, and indeed having short vowels everywhere would facilitate the assimilation/dissimilation process, if that is what is going on.

But a long vowel in the first syllable is a different matter, as one needs this to explain the spelling variations in the sources and the OE form: do you suppose that this is where the macron is supposed to be in L & S?  I don't think you need change anything in your splendid ode: Londinion is a perfectly good Greek spelling (Ptolemy), and there is, as far as I can see, no evidence for a long i.

Most philological queries, alas, seem to involve taking the lid off a can of worms.

What a relief to have an expert pronounce so clearly on the matter! If the spirit takes me, I shall now happily embark on Latin Sapphics with ‘Londinienses’ in my mind for the coda of a stanza.  The fact is that I have been storing up for use at the appropriate moment another Sapphic coda: the Virgilian phrase ‘primus ab oris’ . This was once artfully misread as ‘primus, a, Boris’ – ah, Boris first! But that’s another story.


For Armand D'Angour's own Pindaric ode on the London Olympics (original Greek and English translation) see http://www.armand-dangour.com/pindaric-odes/, which also gives a translation of Kwasi Kwarteng's Latin verse. Kwarteng is best known as the author of Ghosts of Empire: Britain's Legacies in the Modern World.

The Archaeology of Londinium

Before both settlements were destroyed in Boudicca's revolt (60 A.D.) the relative status of London and Colchester (Camulodunum), the former capital of the Trinovantes and the site of a temple to the Emperor Claudius, is uncertain However, some archaeologists have claimed that Colchester was the capital of the province up to that year and that the decision to make London the administrative centre came after the revolt was suppressed.

The Roman writing tablets recently discovered  on the site for Bloomberg's European headquarters near the Londinium Mithraeum include the oldest dated document found in Britain. Written on 8 January 57 A.D., it is an agreement by one freedman to pay another for goods received. Another document, from about 65- 70 A.D., is an address tag reading LONDINIO MOGONTIO (`To Mogontius in London') and is the earliest mention of the city's name so far discovered. The earliest deciphered tablet is known from the stratum in which is was found to date from the first decade after the Roman invasion in 43 A.D., and was thus probably written within five years of 47 A.D., the most likely date for Londinium's foundation. The decipherment of a number of the tablets was announced by the archaeology department of the Museum of London  (MOLA) on 1 June 2016 and widely reported, including on the BBC and Guardian websites. The archaeologists involved in the project talk about it in this 5-minute video produced by the Bloomberg company. ​ 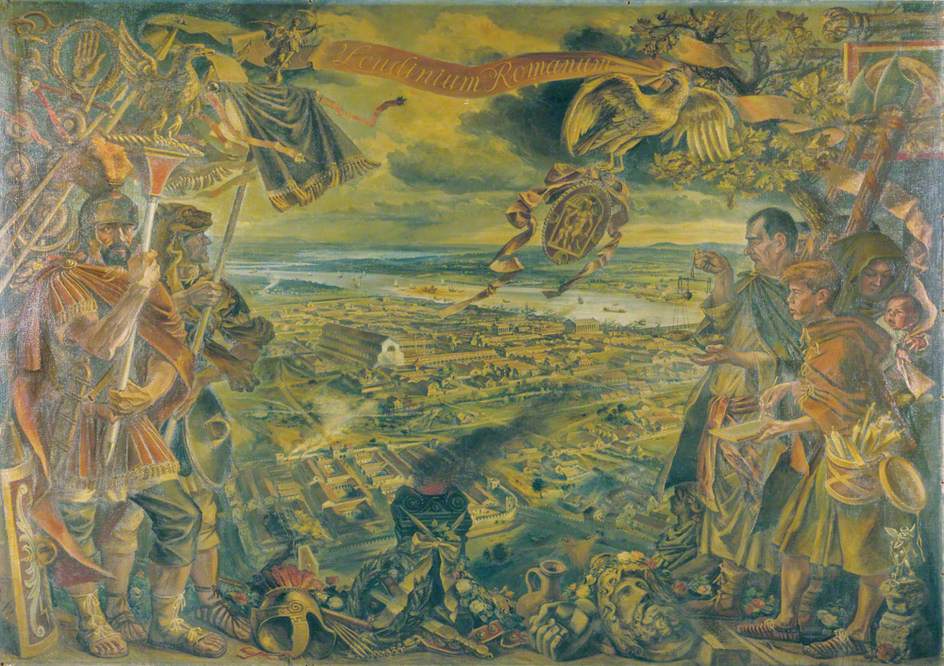 Further information on the excavations at the Bloomberg site, with illustrations, is available in an October 2017 newspaper report here.  All the readable tablets, most of which contain only fragmentary text, have been published with facsimiles, transcriptions and translations in Roger Tomlin, Roman London's first voices: writing tablets from the Bloomberg excavations, 2010-14, London: MOLA, 2016.  An hour-length lecture on the discovery by the author, a leading authority on Roman cursive writing, is now (October 2018) available  on YouTube:
​A very readable exploration of Roman sites in Britain, and of the way later generations of Britons have reacted to and imagined it, is provided in Charlotte Higgins' Under Another Sky: Journeys in Roman Britain.  The best general reference site on the web for Roman Britain is currently (November 2018) maintained by Mike Haseler at http://roman-britain.co.uk/  The PowerPoint prsentation below, captioned in simple Latin, gives an outline of the history of the province: