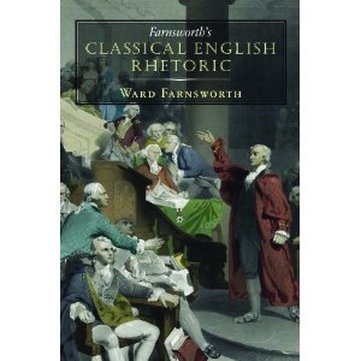 The Word
Rhetorical devices
A look inside what makes language work
By Erin McKean
The Boston Globe
January 23, 2011

The word rhetoric has come in for a lot of abuse lately. When we see the word these days, it's at best preceded by "empty," and at worst fingered as a national threat, as in the recent debate over overheated political rhetoric.

But rhetoric in the original sense — the classic sense — is something else. It's a toolkit, a set of methods used for generations to make speech more artful and effective. Rhetoric in this sense now tends to be dismissed as an anachronism, the kind of thing that goes with side whiskers or quill pens.

But the truth is, we all use this kind of rhetoric every day without understanding it. When you say, "Hot enough for ya?" banal as it might seem, you're employing erotema — a question that doesn't call for a reply (what we call a 'rhetorical question"). When you're setting up two friends and say, "He's not unattractive," that's litotes, by which you avoid making a claim directly, instead denying the opposite. Like M. Jourdan in Moliere's play, who finds he has "spoke Prose above these forty Years, without knowing any thing of the Matter," we use these devices every day, in the same way and for the same purposes we use a hammer to drive in a nail or a can opener to open a can: because that's the best way to get what we want to get done, done.

To those of us who haven't studied rhetoric — that is, pretty much all of us — its workings are largely invisible. So we are lucky to have Ward Farnsworth's wonderful new book, Farnsworth's Classical English Rhetoric, to explain the notion and rescue it from total disrepute. Farnsworth, a professor of law at Boston University, fell in love with rhetoric as a student of Latin, and realized that tools for writing and speaking effectively were of great value to the students he was training to be lawyers.

Out of the hundreds of figures of speech known to the ancients, Farnsworth has pulled just 18, the ones that he considers to be most useful for modern speakers and writers. Their names can be daunting — epizeuxis, symploce, polysyndeton, aposiopesis — but Farnsworth sorts them into handy categories and gives examples of their use, not from Roman authors dead and gone for centuries, but from the great writers of English from about 1600, the time of the King James Bible, to 1950. (Farnsworth stops in 1950, he explains, because "the authors and statesmen of those earlier periods studied rhetoric more closely than it tends to be studied today.")

His practitioners are not only notably skilled, but also notably entertaining, which makes "Farnsworth's Classical English Rhetoric" as much an enjoyable read as an educational manual. Take the example of litotes — affirming something by denying the opposite — Farnsworth gives from Mark Twain: "She was not quite what you would call refined. She was not quite what you would call unrefined. She was the kind of person that keeps a parrot." Then there's this example of anadiplosis (repetition) from an 1836 speech by Daniel Webster, in the Senate: "The bill, therefore, was lost. It was lost in the House of Representatives. It died there, and there its remains are to be found." Or from Macaulay's "History of England," this example of isocolon (parallel structure): "The Puritan hated bearbaiting, not because it gave pain to the bear, but because it gave pleasure to the spectators."

By pulling the examples out and labeling their moving parts, Farnsworth shows us how rhetoric really works, as in this example of metanoia (correcting oneself in midstream) from Arthur Conan Doyle, designed to startle or surprise the reader: "And now, Doctor, perhaps you would kindly attend to my thumb, or rather to the place where my thumb used to be." Or as this example of polysyndeton (the repeated use of conjunctions), which in Farnsworth's explanation can "lend a sense of motion to a narrative [and] give the action a breathless or headlong quality": "[T]hen the rushing Pequod, freighted with savages, and laden with fire, and burning a corpse, and plunging into that blackness of the darkness, seemed the material counterpart of her monomaniac commander's soul." (From "Moby-Dick.")

And that is perhaps the most compelling reason to read "Farnsworth's Classical English Rhetoric" — to recognize when the techniques of rhetoric are being employed, and why, so that you can separate them from the ideas they carry, and judge each independently. In the same way the same scene in a movie can seem either innocuous or sinister depending how it's presented (search for "recut trailer" on YouTube if you don't believe me), different figures of speech can color statements in subtle ways.

Maybe if rhetoric were given another name — say, something like the design patterns of computer science ("templates for solving problems that can be used in many different situations") — we could look through the old-fashioned-sounding term and focus instead on the very useful tools it provides. But until rhetoric is successfully rebranded and becomes popular again, you can treasure the access to the rhetorical art Farnsworth provides in his extremely enlightening book.

Erin McKean is a lexicographer and founder of Wordnik.com. E-mail her at erin@wordnik.com.