​QUESTIONS ARISING FROM 85th. MEETING – 29/12/17
(the record of earlier meetings can be downloaded from the main Circulus page) 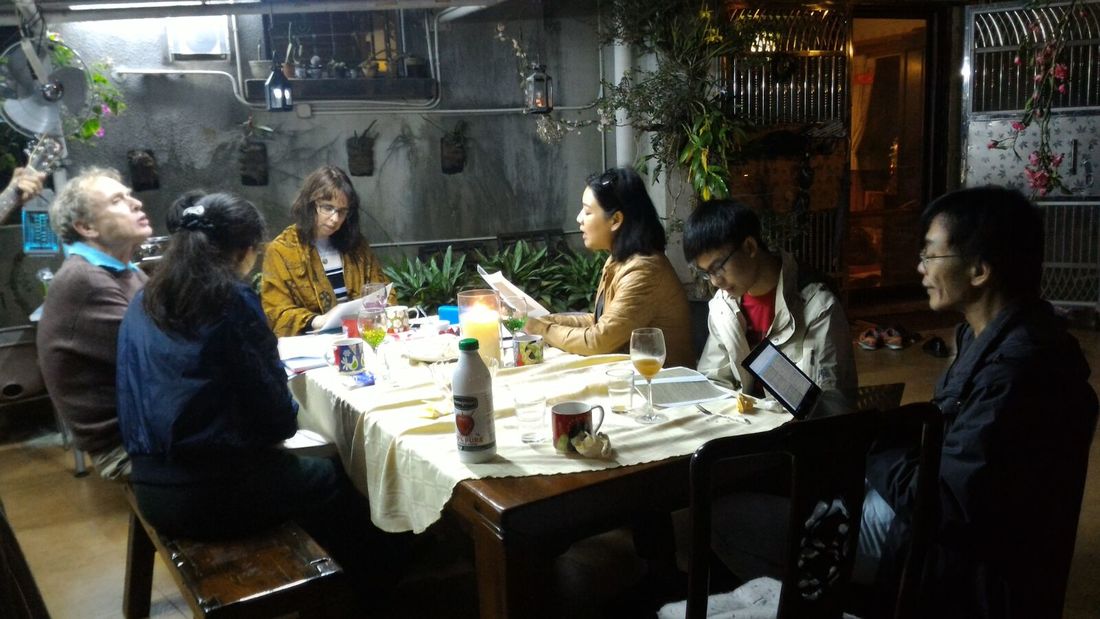 ​There is also a problem with selecting the most appropriate word for `potato.’ The Circulus used to employ sōlānum, ī n, from the botanical name for the plant, Solanum tuberosum. However, in classical Latin sōlānum referred rto nightshade and in the Linnaean system Solanum is the name of the very large genus which includes this plant, potatoes tomatoes and many others. The potato is, of course, a New World species unknown to the Romans and the English word comes, via Spanish patata, from the Haitian Carib word batata, which actually referred to the sweet potato.  The entry at www.etymonline.com gives interesting information on the diffusion of this staple food and the name for it:

​Sweet potatoes were first to be introduced to Europe; in cultivation in Spain by mid-16c.; in Virginia by 1648. Early 16c. Portuguese traders carried the crop to all their shipping ports and the sweet potato was quickly adopted from Africa to India and Java.
The name later (1590s) was extended to the common white potato, from Peru, which was at first (mistakenly) called Virginia potato, or, because at first it was of minor importance compared to the sweet potato, bastard potato. Spanish invaders in Peru began to use white potatoes as cheap food for sailors 1530s. The first potato from South America reached Pope Paul III in 1540; grown in France at first as an ornamental plant. According to popular tradition, introduced to Ireland 1565 by John Hawkins. Brought to England from Colombia by Sir Thomas Herriot, 1586.

Against that background, batāta is perhaps the best choice for modern Latinsts, though there are several other labels, including māla terrestria (``earth apples’), on the analogy of French pomme de terre.

Dessert included both crême brûlé (crēmum cremātum?) and Pavlova (Paulōva, -ae f?). Meringue, the major ingredient of Pavlova, is perhaps meringa, -ae f.  For `dessert’ itself, either bellāria, -ōrum n (found in Suetonius) or the Ciceronaian secunda mēnsa (`second course’) can be used.

Eugene is a competent performer in the genre but the rest of us got more credit for effort than for results when we attempted to sing the Gregorian Chant Latin version of `Rudolph the Red-nosed Reindeer’ (Renō erat Rudolphus). This was composed by Eyolf Østrem using lyrics by an unknown translator. For details, and an audio link see http://gaudium-mundo.blogspot.hk/2005/12/reno-erat-rudolphus-plain-chant-version.html Eugene explained that the 4-staff notation now used for chant is actually a 19th century product: medievalsingers had to do without the lines.

We sang Adeste Fidēlēs (`O Come all ye faithful’) and the Advent carol Vēnī, Venī Emmanuel (`O Come. O Come Emmanuel’), after listening to performances on YouTube (see the lyrics and links below and at https://linguae.weebly.com/carmina-nativitatis.html) Eugene had also brought along the Gregorian Chant music and lyrics of the first of these carols, which is included in the Liber Usualis, a vast compilation of Latin texts in regular use in the Catholic Church until the switch to the vernacular in the 1960s (see https://en.wikipedia.org/wiki/Liber_Usualis ).  The collection is said to have originated in the 11th century with the monks of the Abbey of Salermes in France and a 1961 edition (comprising over 2000 pages) is available at https://archive.org/details/TheLiberUsualis1961 The Liber Usualis version included two stanzas not in the handout John had brought and these have now been added to the `linguae’ page from which the handout had been taken:
​Much more difficult to sing was the setting of the story of the angel and the shepherds from Luke’s Gospel in Saint-Saens Christmas Oratorio (also given below). The composer is better-known for his `Carnival of the Animals’ and his opera `Samson and Delilah.’

John had also prepared a passage on snow fights in 16th century Sweden from Olaus Magnus’ Historia de Gentibus Septentrionalibus, Rome, 1555, which is at https://books.google.com.hk/books?id=O9lEAAAAcAAJ . We did not have time to read this so it will be used at a future meeting. 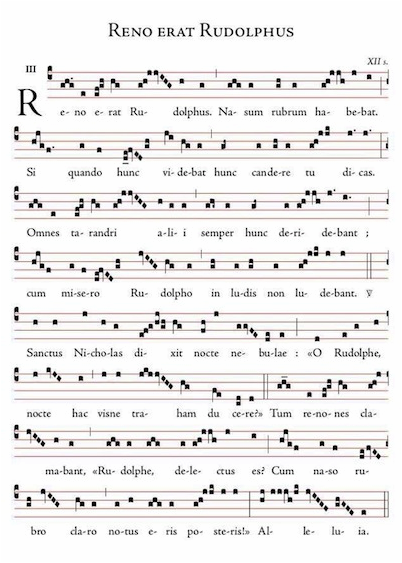 VOCABULARY NOTES
rennus, -ī m seems to be a recent coinage for `reindeer’. The usual Latin equivalents are tarandrus, -ī m (used by Pliny the Elder) and rēnō, rēnōnis m (in Caesar), though the latter probably only meant reindeer skin (as a garment) in classical Latin. The scientific name for the species is Rangifer tarandrus and rangifer, -ferī m is found in 16th century Latin as is cervus iugālis
cavillor, -ārī, cavillātus sum is classical Latin for `jeer’ or `scoff (at)’
exclāmārint is a contraction of the perfect subjunctive exclāmāverint


The plainchant version of `Rudolph the Red-nosed Reindeer’ can also be heard (with the Latin text as subtitles) on YouTube:   https://www.youtube.com/watch?v=BwkH1SAwphY


Luke 2: 8-14 (the angel appearing to the shepherds) is set to music in Saint-Saëns’ Christmas Oratorio (from 3:15 in the recording at https://www.youtube.com/watch?v=Ktt7s7yDGxc )