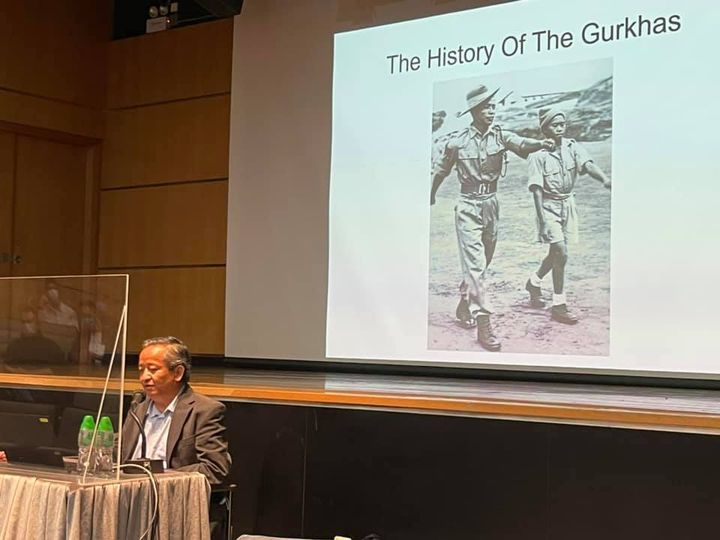 Tim Gurung speaking to the Society in October 2021 on the history of `the Gukhas', men from the hills of Nepal who have fought for Britain over the last 200 years and whose children and granchildren form the bulk of Hong Kong's Nepali community
Details of upcoming talks, to which all are welcome, and other activities are posted here.  Before Covid19 after each talk, those attending are invited to a self-paying dinner at the Chiu Chow City restaurant across the square from the Hong Kong History Museum, where discussion could be continued informally. This arrangment will hopefully soon be reinstated.

​For fuller information on the society's activities (including archived abstracts of all talks since 1996) visit the HKAS website.  Versions of Candy Yu's presentation on the Manila hostage crisis  and Wu Liang's on seafarers can be read on-line in the Hong Kong Anthropologist. The PowerPoint presentation of John Whelpton's January 2012 talk on Christianity in Nepal can be downloaded from the Nepal page on his site.
Schooling as Networking: Chinese Education of Yunnanese in the Thai-Burmese Borderland
An anthropological lecture by Siu-hei LAI

This talk discusses the Chinese transnational network ethnographic explorations of Chinese education of Yunnanese youth in the Thai-Burmese borderland. It suggests that Chinese schooling is about Chinese transnational social networking, a tradition that goes back to the 15th century. For Yunnanese youth in Northern Thailand, attending Chinese schools is an essential part of their educational experience supplementing Thai public education in light of the historical contingencies of Yunnanese migrations. Before the 1980s, the Chinese school was the only educational institute in Ban Pucha Thai (pseudonym). Since the school’s establishment in 1975, it has relied on donations and various kinds of assistance to sustain its educational provision for the Yunnanese villagers. There are numerous events and activities on campus for fundraising and networking with patrons from different parts of the world in addition to pedagogical routines. The teenagers are asked by their Chinese schools to take part in these events and engage with the global patrons. While they acknowledge the importance of and opportunities brought by these activities, they feel overwhelmed and try to avoid being dragged into them.

Siu-hei LAI is a PhD candidate at the Chinese University of Hong Kong. He specializes in the anthropologies of youth, aspiration, and migration with a regional focus on Southeast Asia.​

The History without the Indigenous People: Recent Archaeological Discoveries in the Far South of the Han Empire and their Implications
An anthropological lecture by LAM Wengcheong

Assimilation and sinicization are probably the two main topics in the study of the Far South (i.e., present-day Lingnan) of the Han empire (202BC-220AD). This presentation will introduce the latest archaeological discoveries related to the Han period in the Far South and discuss how the new evidence can shed light on the two essential issues in the writing of history of the Han empire. In particular, this talk will introduce one critical challenge that has been overlooked for a long time; namely, the sparse presence of confirmed indigenous burials in the region. Also, this talk will discuss how this challenge can, in fact, help situate archaeological records in broader anthropological discourses.

LAM Wengcheong is an assistant professor of anthropological archaeology working in mainland China. His research currently focuses on the economic system and social development during the Bronze Age and Han Empire. His research incorporates interests in various archaeological techniques including metallurgy, zooarchaeology, and GIS (Geographic Information System) to study the craft production and exchange network during one of the most critical periods in Chinese history. He has also conducted archaeological research in Shaanxi to investigate the ancient iron economy in the Han capital area since 2011.

Issues of this on-line journal, with a special emphasis on presenting the work of younger anthropologists, can be downloaded here.