THE CONVERSATION  31 JULY 2018
Ancient Greek music: now we finally know what it sounded like​
https://theconversation.com/ancient-greek-music-now-we-finally-know-what-it-sounded-like-99895​ (accessed 2/9/18)

New approachesThe situation has changed largely because over the past few years some very well preserved auloi have been reconstructed by expert technicians such as Robin Howell and researchers associated with the European Music Archaeology Project. Played by highly skilled pipers such as Barnaby Brown and Callum Armstrong, they provide a faithful guide to the pitch range of ancient music, as well as to the instruments’ own pitches, timbres, and tunings.
​
Central to ancient song was its rhythms, and the rhythms of ancient Greek music can be derived from the metres of the poetry. These were based strictly on the durations of syllables of words, which create patterns of long and short elements. While there are no tempo indications for ancient songs, it is often clear whether a metre should be sung fast or slow (until the invention of mechanical chronometers, tempo was in any case not fixed, and was bound to vary between performances). Setting an appropriate tempo is essential if music is to sound right. 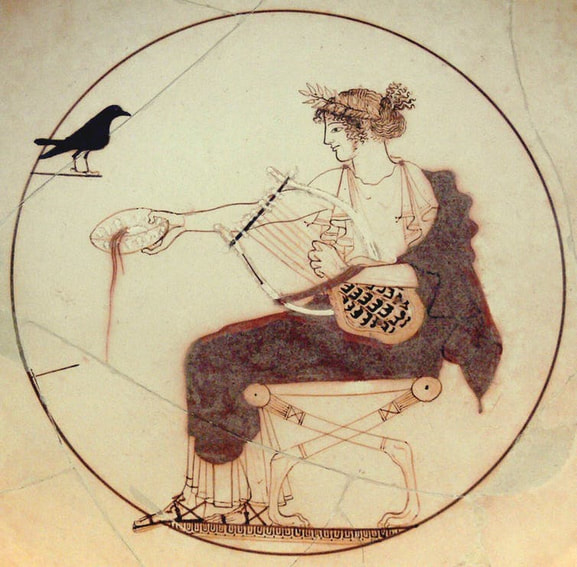 What about the tunes – the melody and harmony? This is what most people mean when they claim that ancient Greek “music” is lost. Thousands of words about the theory of melody and harmony survive in the writings of ancient authors such as Plato, Aristotle, Aristoxenus, Ptolemy, and Aristides Quintilianus; and a few fragmentary scores with ancient musical notation first came to light in Florence in the late 16th century. But this evidence for actual music gave no real sense of the melodic and harmonic riches that we learn of from literary sources.

More documents with ancient notation on papyrus or stone have intermittently come to light since 1581, and now around 60 fragments exist. Carefully compiled, transcribed, and interpreted by scholars such as Martin West and Egert Pöhlmann, they give us a better chance of understanding how the music sounded.
​
Ancient Greek music performedThe earliest substantial musical document, found in 1892, preserves part of a chorus from the Athenian tragedian Euripides’ Orestes of 408BC. It has long posed problems for interpretation, mainly owing to its use of quarter-tone intervals, which have seemed to suggest an alien melodic sensibility. Western music operates with whole tones and semitones; any smaller interval sounds to our ears as if a note is being played or sung out of tune. 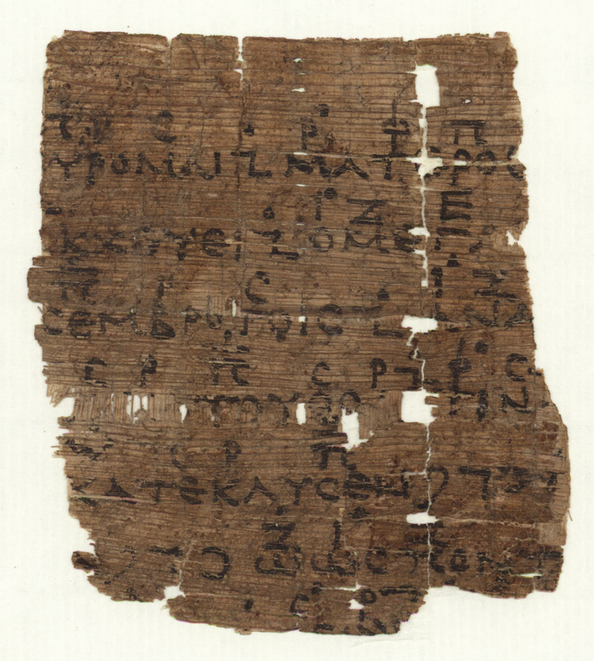 Musical fragment from Orestes by Euripides. Wikimedia Commons
​
​But my analyses of the Orestes fragment, published earlier this year, led to striking insights. First, I demonstrated that elements of the score clearly indicate word-painting – the imitation of the meaning of words by the shape of the melodic line. We find a falling cadence set to the word “lament”, and a large upward interval leap accompanying the word “leaps up”.
Second, I showed that if the quarter-tones functioned as “passing-notes”, the composition was in fact tonal (focused on a pitch to which the tune regularly reverts). This should not be very surprising, as such tonality exists in all the documents of ancient music from later centuries, including the large-scale Delphic Paeans preserved on stone.
​
With these premises in view, in 2016 I reconstructed the music of the Orestes papyrus for choral realisation with aulos accompaniment, setting a brisk tempo as indicated by the metre and the content of the chorus’s words. This Orestes chorus was performed by choir and aulos-player at the Ashmolean Museum, Oxford, in July 2017, together with other reconstructed ancient scores.
It remains for me to realise, in the next few years, the other few dozen ancient scores that exist, many extremely fragmentary, and to stage a complete ancient drama with historically informed music in an ancient theatre such as that of Epidaurus.
​
Meanwhile, an exciting conclusion may be drawn. The Western tradition of classical music is often said to begin with the Gregorian plainsong of the 9th century AD. But the reconstruction and performance of Greek music has demonstrated that ancient Greek music should be recognised as the root of the European musical tradition.
______________________________________________________

​An account of the author's research at an earlier stage:

‘What song the Syrens sang, or what name Achilles assumed when he hid himself among women’, wrote the 17th-century polymath Thomas Browne, ‘though puzzling questions, are not beyond all conjecture.’ He was, as it turns out, correct.

As a classicist and trained musician, when I read Greats at Oxford in the late 1970s I was fascinated by the thought of discovering what song the Sirens sang, or more broadly what ancient Greek music sounded like — but when I looked into the scholarship I found it to be forbiddingly technical and musically unrewarding. In 1983 I sat the exams for the All Souls Prize Fellowship and, having been invited to dine at the College, I found myself seated next to Isaiah Berlin, who regaled me with stories about famous musicians he had met.

At the subsequent viva — attended by around fifty All Souls Fellows — Berlin eagerly asked ‘Since you’re a practising musician, aren’t you interested by the idea of investigating ancient Greek music for a few years?’ My response was ‘I’m afraid that the evidence is too slight for an extended investigation’. There was a short silence, after which one of Fellows coldly observed ‘All the more reason to do it, you might think’. I immediately realised that I had failed to impress, and shortly thereafter I embarked on a career as a cellist.

My assessment of the situation regarding ancient Greek music was as wrong as it was brash. In 1992 Martin West produced Ancient Greek Music, in which he pulled together with masterly scholarship the evidence for ancient instruments, rhythms, melodies, and musical theory, and provided for the first time in an English publication a comprehensive set of transcriptions into modern musical notation of the surviving melodies. He has since co-authored with Egert Pöhlmann another volume, Documents of Ancient Greek Music, laying out the musical texts together with variant readings, photographs and expert commentary.

Thanks to these publications, any classicist with a basic musical training can now attempt with (relative) ease and confidence to hear how dozens of ancient Greek songs might have sounded. The fascination of this material is enhanced by the astonishing musical notation invented by Greeks in the mid-fifth century BC, details of which are preserved for us by the late antique author Alypius. Consisting of letter-forms placed over the vowels of words to indicate their relative pitch – a letter A, for instance, represents a musical note a fifth higher than an N – the vocal notation preserves a faithful record of ancient melodies. Absolute pitch, by the way, can be approximated from the vocal ranges required to sing the surviving tunes, supplemented by measurements taken on ancient instruments.

Texts using this notation have been known of since the late 16th century, when some pieces of Greek music on papyrus were published by the musician Vincenzo Galilei, father of the more famous Galileo. Since then, around 50 documents have been discovered on papyrus or stone inscriptions, providing a small but precious corpus that allows us to understand something of how ancient Greek melodies were heard and rhythms realised.

Imagine a situation in which all we had of five centuries of Western opera were the libretti, and only a few fragments of the music. Such a situation is, more or less, that of students who engage with the poetry of classical Greece, which covers around five centuries from 800 to 300 BC. The poets who composed the Iliad and Odyssey, the love poems of archaic Lesbos, the victory odes of the early fifth century BC, and the choral passages of Greek tragedy and comedy —  all composed the words to be sung and accompanied by musical instruments.

Yet little attention is paid even to the rhythms so carefully inscribed into the words of these songs, which have long been known and studied under the forbidding aegis of Greek metre. Even less attention is paid to melodic structures, which thanks to the surviving fragments – as well voluminous writings by ancient authors and musical theorists (admirably translated and compiled by Andrew Barker in Greek Musical Writings) – is something on which we are now in a position to exercise an informed scholarly imagination. By neglecting the aural dimension, readers of ancient texts are bound to be missing something of the original aesthetic impact of these songs.

What difference to the appreciation of the poetry might the original melodies have made, in conjunction with their complex and often offbeat rhythms, and the sounds of lyres and reed-pipes? In October 2013 I embarked on a two-year project, supported by a British Academy Fellowship and sabbatical leave from Jesus College, to recover the sounds of Greek music and to try to answer this question. In pursuit of my inquiry I shall be visiting Greece, Sardinia, and Turkey, on the trail of surviving ancient musical traditions, and collaborating with experts from many countries on instruments, dance, and ancient musical texts.

Such a project lends itself to audio-visual demonstration, and I shall be using whatever resources are available to film and disseminate the research to the wider public. Western-trained musicians such as myself need to set aside our presuppositions about music. We are the heirs of over a thousand years of refinement – and in some areas simplification and standardisation – of the forms and structures underlying Western music. Since one feature of ancient Greek music was the use of quarter-tone intervals, a better parallel may be with the music of the Middle East. The principal instruments used to accompany the voice, the lyre and the reed-pipes (auloi), are known from descriptions, paintings and archaeological remains; but the musical texts indicate that the Greeks of classical times used very different kinds of rhythm and melodisation from those with which we are familiar. To understand what the music meant to ancient listeners requires a broad ethnomusicological approach and a sympathetic ear for non-Western musical traditions.

The ancient Greek language was intrinsically musical in that it was tonally inflected, with the syllables of words rising and falling in pitch. A large proportion of the surviving melodies conforms in profile to these word pitches; but in the earliest substantial musical document that survives, comprising a few lines of sung music from Euripides’ Orestes (thought to represent music that Euripides himself composed), the melody deviates from word pitch. Euripides was a notoriously avant-garde composer, and this may indicate one way in which his music was heard as wildly modern in his time.

The fragment seems instead to indicate a kind of mimetic ‘programme music’: the words ‘I lament’ (katolophuromai) and ‘I beseech’ (kathiketeuomai) are set to a falling, mournful-sounding cadence, and when the singer exclaims ‘my heart leaps like a Bacchant’ (anabakcheuei), the melody appears to leap by a musical fifth. The huge appeal of Euripides’ new music is indicated by a story in Plutarch about the Athenians imprisoned in Syracusan quarries in 413 BC after their disastrous campaign to conquer Sicily. Those who could sing Euripides’ latest songs to their captors were able to earn food and drink and even to save their lives.

The reconstruction of ancient music may not solve the puzzle of the Sirens’ Song. But if it helps us learn something of the original sound and appearance of a tragic chorus, it will justify my return to the kind of inquiry that over thirty years ago Isaiah Berlin hoped I would undertake at All Souls.

​How did ancient Greek music sound? Armand D'Angour gave a similar description of his work to the BBC (23 October 2013), with a link to a brief musical performance (lyre plus vocals)by Dr. David Creese.  There are additional audio samples, also performed by  David Creese (instrumental only) embedded on the Open Culture site

For more recent musical compositions to accompany ancient Greek poetry, see the bottom of the RES GRAECAE page on this site
​