QUESTIONS ARISING FROM 82nd. MEETING – 20/10/17
(the record of earlier meetings can be downloaded from the main Circulus page)

We ordered carō assa (roast meat), including gallinācea (chicken), porcīna/suīna (pork) and anatīna (duck), plus daufum anūs maculātae (mapodaufu or `pock-marked old woman’s daufu’; see the record for the March meeting for other possible terms for this dish ), cucurbita amāra (bitter gourd), carō dulcis et acida ( gulo yuk, (咕嚕肉), known informally as gweilo yuk (鬼佬肉) because of its ubiquity in Chinese restaurants in the West, where it appears on the menu as sweet and sour pork), squilla cum ōvīs contrītīs (shrimp with scrambled egg) and urtica marīna (海蜇, jelly fish).   This was accompanied as usual by orӯza (rice) and vīnum rubrum.

Many reference books give for pulmō for `jelly fish’ but that Latin term, normally meaning `lung’, actually refers in a maritime context  to `comb-jelly’, a different species, once known by the obsolete English term `sea lung.’ This is discussed at length, with illustrations, in the record of the January 2016 meeting.

As several of us had studied ancient Greek as well as Latin, we briefly discussed the relative difficulty of the two languages. It was agreed that Greek was the bigger challenge both because fewer words could be recognized from their similarity to English and also because the morphology was more complicated than in Latin. This was particularly true of the Greek verb, which had three voices compared to Latin’s two and an optative mood in addition to the subjunctive.

Greek was the original language of the Christian liturgy but its replacement by Latin in Rome itself seems to have been complete by the 4th century (see https://en.wikipedia.org/wiki/Pre-Tridentine_Mass). Eugene told us some months ago about the Latin Mass which can still be heard every Sunday at 12:30pm at Mary Help of Christians Church (inside Tang King Po School, 16 Tin Kwong Road, Ma Tau Wai, Kowloon). There are apparently other Latin Masses said in Hong Kong, including, according to Luisa, one in a pre-Tridentine rite, but John was informed by Fr. Ha that none of these others were open to the public.

We also briefly noted the use of Latin in a celebration of the history of Italian fascism written by classical scholar Aurelio Giuseppe Amatucci and analysed in Han Lamers and Bettina Reitz-Joosse’s The Codex Fori Mussolini: a Latin Text of Italian Fascism (see http://bmcr.brynmawr.edu/2017/2017-05-39.html for a detailed review of the work.)   The original version of the text remans buried beneath the obelisk in Rome in what was originally named the Forum Mussolini but is now known as the Foro Italico in Rome. The Fascists saw themselves as resurrecting the glories of ancient Rome and so encouraged the use of Latin, a policy which unfortunately led a number of classical scholars to collaborate closely with them. Another example of this collaboration is Colloquia Latino Sermone Scripta, dialogues with Italian translation produced by school teachers G. Balboni and E. Nero, who wrote with great enthusiasm about fidēs lictōria, the term they use as a translation of `fascism’. The lictors who escorted the consuls carried an axe in a bundle of rods (fascēs), which Mussolini adopted as a symbol of his movement. The Colloquia, which are a useful resource despite their ideological colouring, can be downloaded from:  https://vivariumnovum.it/edizioni/libri/dominio-pubblico/Balboni%20&%20Neri%20-%20Colloquia%20Latino%20sermone%20conscripta.pdf

In the context of fascism, it was mentioned that Mussolini’s name appears still in St. Teresa’s Church in Kowloon an an engraved list of contributors to the church’s construction in the 1930s. There is some historical background in Jason Wordie’s 2010 article in the South China Morning Post: http://www.scmp.com/article/716290/out-and-about . The memory of a dark period in European history is also preserved in the swastikas carved on some German tombstones in the Colonial Cemetery in Macao, in contrast to Hong Kong where similar emblems were removed after WWII.

Tanya had discovered on a Facebook page a photograph of a page from a medieval manuscript which the monk copyist had had to leave partly blank after a cat urinated over it. He did, though, write out a curse against the said feline:

“Nothing is missing here but a cat urinated over it one night.Damned be the terrible cat who urinated over this book by night in Deventer [a town in the Netherlands] and likwise all the others [i.e. other cats]on account of him. And the greatest care should be taken that books are not allowed to be left open over night where cats can come’

See https://medievalfragments.wordpress.com/2013/02/22/paws-pee-and-mice-cats-among-medieval-manuscripts/ for more information (though with the misprint cattie for cattī). This blog explains that monasteries needed cats to keep down the numbersof rats and mice which posed a bigger threat to their books.

We wondered about the verb mingō, mingere minxī, mi(n)ctum which some of us thought might have been a cruder equivalent of ūrīnō. However, although the noun ūrīna (urine) is classical, the cognate verb is only found in the required sense many centuries later. The verb ūrīnō is used in pre-classical literature but with the meaning `dive’ (into water), and the classical language has the deponent ūrīnor, -ūrīnārī, ūrīnātus sum with the same meaning. In contrast mingō was used quite often by classical writers and, according to James Adams, whose The Latin Classical|Vocabulary is the standard authority on questions of this sort, does not seem to have been a taboo word nor, since it has not survived in the modern Romance languages, is it likely to have been common in popular speech. A closer equivalent to the English `piss’ is meiō, meiere, which seems to have been regarded as a less refined word than mingō but not as indelicate as the verb caco (-āre, -āvī, -ātum), `shit’. 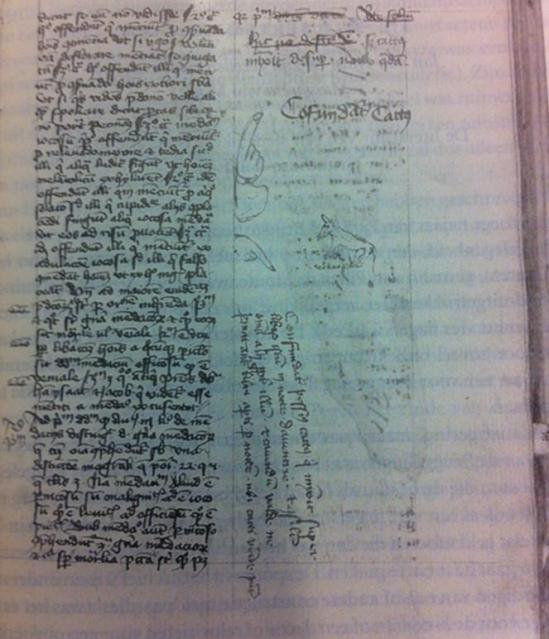 ​The word cattus appears to have entered medieval Latin (and also the Romance languages ) as a loan word from Germanic, displacing classical fēlēs. There is no connection with `catty’, a Malay-derived word for the Chinese (Cantonese) gan (斤), a measure of weight.

Tanya had also drawn our attention to the list of mostly onomatopoeic Latin words compiled by Czech educationist Jan Amos Komensky (Iohannes Amos Comenius, 1592-1670) as an aid to learning the names of letters of the alphabet. Comenius is regarded as a pioneer of modern language pedagogy and in his native land (most frequently referred to as the Czech Republic though the shorter name Czechia is becoming morecommon) he has a university named after him and also adorns banknotes. Don, a recent visitor to the country, pulled one of the latter out of his pocket. The name `Komensky’ is derived from his native (or perhaps adopted) town, Komňa.

​See http://www.learnlatinlanguage.com/DEMALPH.HTM#ALPHABET for the full list, with illustrations and hyper-linked recordings. 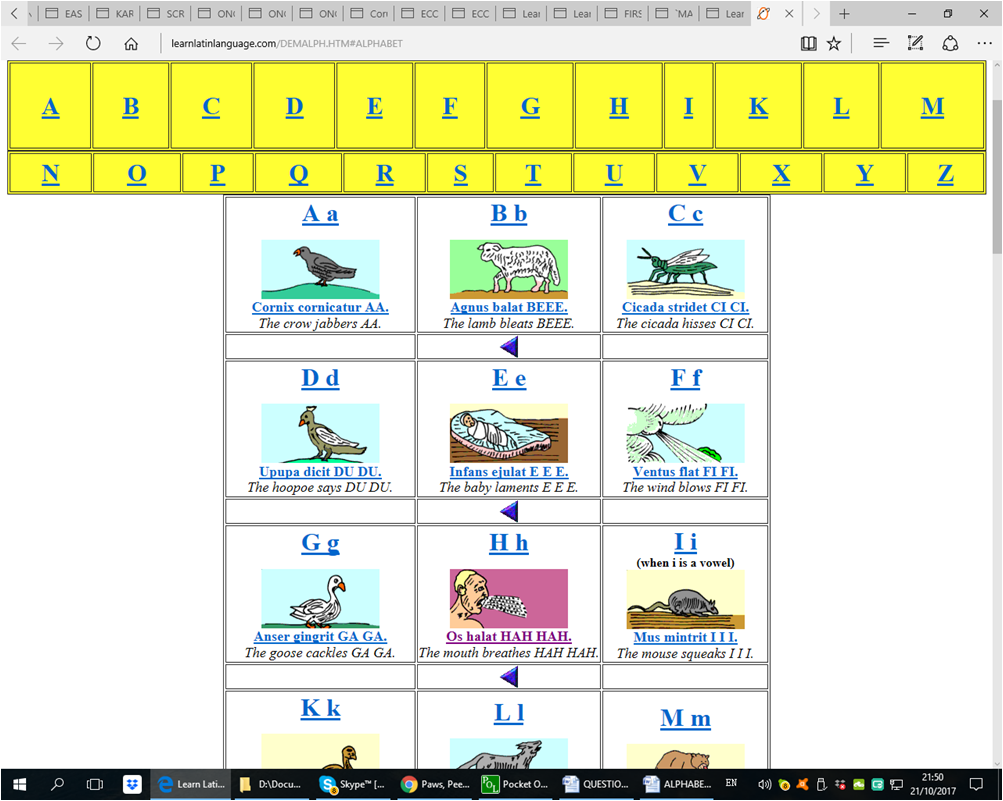 We practised the full set of sentences devised by Comenius:

In the intervals of making the appropriate noises ourselves, we noted that TAE for the jackdaw’s cry must be two syllables (ta-e) rather than either the diphthong (die) that the digraph represented before 100 A.D. or the simple vowel (as in bed) bed). We also noted that pīpiō, -āre (to chirp) is the base for the neo-Latin Pipiātrum, used as the translation of the `Twitter’ social media platform.

We completed reading the last two of the Vulgate passages prepared by Pat – Isaiah 11: 1-5 and Acts 24: 1-9 (see the text at the end of last month’s record here). Eugene pointed out that the Jesse referred to in Isaiah was David’s father and Pat suggested that virga ōris suī (`rod of his mouth’) was probably a Hebraicism.

While discussing again the original language of Acts, and Pat’s theory that the account of Felix’s trial might be from the oficial record (see the September discussion at https://linguae.weebly.com/conventus-sept-2017.html), Pat also said that, unlike the Epistles generally, the one to the Hebrews must have been written originally in Hebrew or Aramaic, as it was addressed to Jewish Christians in Jerusalem who were thinlking of returnong to traditional Judaism. There is, however, controversy over the real purpose of the letter and also over its authorship. Among the Church Fathers, Origen, arguing that the style is more refined than in other Epistles, suggested that, while it represented Paul’s own thought, it was probably actually composed by somebody else. (see https://en.wikipedia.org/wiki/Epistle_to_the_Hebrews )

Pat mentioned a forthcoming trip to Italy on which he hoped to go to Monza to see the `Corona Ferrea’ (Iron Crown), which is probably the oldest crown in Europe (see https://en.wikipedia.org/wiki/Iron_Crown_of_Lombardy) and was used in coronations in Italy down to the 19th century. Although associated particularly with the Lombards, who dominated Italy from the late 6th to the late 8th century, parts of it may date from even earlier, recent research suggesting it combines sections from the 4th/5th century with others from the 9th. The name reflects the belief that it incorporated iron from one of the nails used in the Crucifixión and, although analysis has revealed it now contains no iron, it might once have been worn with an iron band added on top of it.  The Iron Crown is, in any case, older than the Imperial Crown of the Holy Roman Empire, perhaps made in the 10th. or 11th. century and in use till Napoleon formally abolished the empire in 1806. The original crown is kept in Vienna and a replica in the Rathaus in Aachen, Charlemagne’s capital (see https://en.wikipedia.org/wiki/Imperial_Crown_of_the_Holy_Roman_Empire)

The first of these pieces uses the adjective Theodiscus for `German’, as is the practice in a lot of neo-Latin writing. The word derives from the proto-Germanic*þeudō (`people’) plus an adjectival suffix and both the modern Italian tedesco and the Germans’ own name for themselves and their language, Deutsch, derive ultimately from this (see the discussion at https://en.wikipedia.org/wiki/Theodiscus). Luisa believed the Romance term germanico was used in Italian down to the Renaissance after which it was supplanted in some regions by tedesco whilst the older term remained in use in others.  Later research revealed that germanico was use extensively in the fascist period in line with the regime’s emphasis on its supposed Roman roots (see above) and that the word is still heard occasionally but not nearly as much as tedesco.  Theodiscus was used originally to denote any vernacular as opposed to Latin but later came to refer to Germanic as opposed to Romance. The earliest recorded use of the Latin word in a linguistic sense was around 786 in an English bishop’s letter, where it clearly referred to English, at that time very much still a Germanic. Shortly afterwards the Latin occurs with reference to Old High German.  Old English had the corresponding word þeodisc but this later became extinct. Victorius himself referred us to a letter written sometime ago by  German scholar, who argued that in Latin Germanicus referred to the old common Germanic language and that Theodiscus is rightly used to distinguish modern High German from this.

We also discussed the words exercitus Britannicus in eō erat ut Germānōs Italōsque mīlitēs dēvinceret, which John took as meaning ` the British were on the point of defeating the Germans and Italians’ whilst someone else thought the reference was to purpose or aim. Later consultation of Kennedy’s Public School Latin Grammar (section 205 4 b, pg. 453, available at https://books.google.com.hk/books?id=tVruAgAAQBAJ) confirmed that the in eō erat ut does inded mean `was on the verge of.’

​Finally Don reminded us that he had himself met Clare Hollingworth in Beijing in the 1970s and aired his own theory that she worked for British Intelligence as well as for the newspapers that formally employed her.