SINA LATINA: LATIN MATERIALS ON CHINESE TOPICS AND LINKS AND COMPARISONS BETWEEN THE ROMAN AND CHINESE EMPIRES

The materials gathered here were originally assembled for use on an intensive Latin course organised in June 2013 by Fr. Louis Ha at the Visial Arts Centre, Hong Kong, but have subsequently been amended and slightly expanded.  I am grateful to Fr. Ha and staff at the Catholic Studies Centre, Chinese university of Hong Kong for their assistance and also to Massimo Scorsone and to `Irisatus' and `Gulielmus' of the Grex Latine Loquentium for help in assembling materials. Corrections have kindly been provided by  ` Agricola' (also of the GLL), Don Gasper and Olivier Rimbault and I would appreciate anyone finding other errors letting me know here.

A good survey of  this whole field, and of the growing interest in East Asia in Western classical studies, is provided in a 2016 paper by Harvard University's Kathleen Coleman, which is available here.

The PowerPoint discusses the origin of the Latin terms for `China', looks at contact between the Roman and Chinese empires and  illustrates authors and works in Latin discussed in the course or otherwise important in the history of contact between China and Europe: 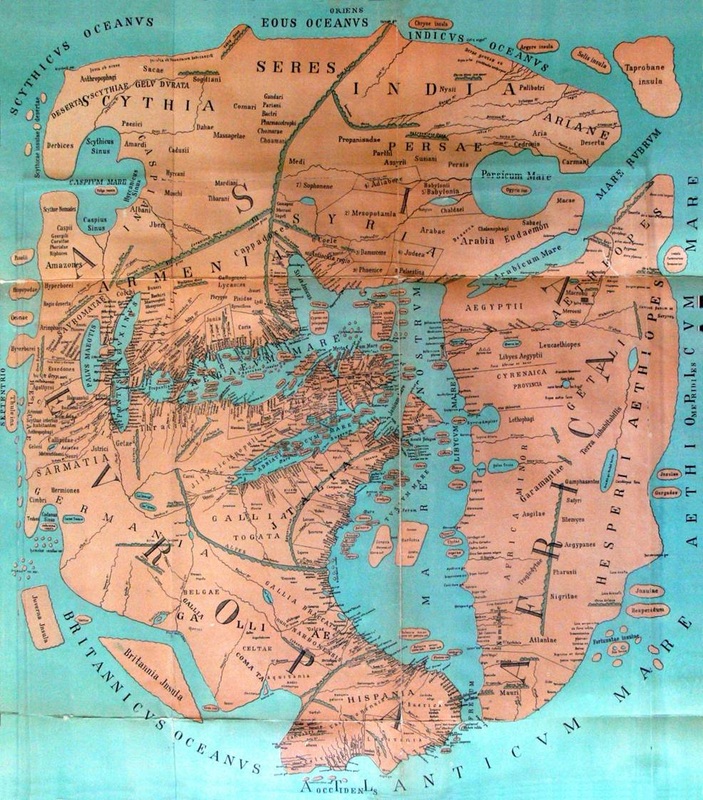 Eurasasia as probably pictured by Roman writer Pomponius Mela (? fl. 43 A.D.). East is at the top and  the `Seres' (literally `the silk people') are the Chinese.
The first Word document for download from the bottom of the page includes extracts from some of the authors referred to in the PowerPoint and from other Latin texts on the subject, including the writings of Virgil, Lucan, Pomponius Mela, Pliny the Younger, Julius Mohl, C.S. Lewis, Iohannes Gluszak, David Morgan and Massimo Scorsone, with interlinear translation  provided.  At the moment the document's  only example of the writings of the 17th. century Jesuit missionaries themselves is Adam Schall's translation of a poem in his honour presented to him by Emperor Shunzhi ( 順治) but the articles by Gluszak and Morgan draw on the Jesuits' reports and discuss their contribution.  The full original text of De Christiana Expeditione apud Sinas Suscepta ab Societate Jesu (1617), which consists principally of Matteo Ricci's own translated correspondence, is available on Google Books . It has been argued, however, that the editor of this work, Dutch Jesuit Nicolas Tregault, made substantial alterations to Ricci's material to present a sanitised view of China that would assist in justifying the Jesuits' accommodationist approach (see Lucca Fezzi's article in Rivista di Storia e Letteratura Religiosa 1999, pp. 541-566) . Also in Google Books is the text of Historica Narratio, De Initio Et Progressu Missionis Societatis Jesu Apud Chinenses, Ac praesertim in Regia Pequinensi (1665), which is a compilation of Schall's correspondence.  Details of other digitalised versions of the latter book and of its German translation are given on the Bibliotheca Sinica 2.0 site. Another major Jesuit contribution is Martino Martini's 1655 work Novus Atlas Sinensis, which has also been digitalised by Google. This includes a good general introduction to China and its culture as well as important historical material but is significant principally for the first reasonably accurate maps of  China to be made available in Europe. The maps themselves can be viewed on the site of the French Bibliotheque Nationale.  Also now available in digital form is the well-known compendium China Illustrata (1667) by Martini's teacher Athanasisus Kircher, who wrote also on Egyptology and microbiology and has been called `the last man who knew everything.'

A major resource not yet covered here but available on the web is the account of China in Book 6 of Giovanni Maffei (Ioannes Maffeius)'s Historiarum Indicarum Libri XVI, published in 1588. The author was an Italian Jesuit commissioned to write a history of lands  visited by Portuguese explorers.  The work has been translated into French but there has been no English translation or modern Latin edition but an annotated text of the opening page has now been placed on Linguae . Classicists at Dickinson College in the USA are organising a workshop on Maffeius for Latin teachers in summer 2018 and Chris Francese hopes eventually to bring out an edition of Book 6 in collaboration with a Chinese scholar.
​
Other important authors from whom extracts are still to be added are ﻿Iohannes de Plano Carpini﻿ and Willliam de Rubruquis, friars who travelled to the Mongol court in the middle of the 13th century (see the SINA LATINA Powerpoint). The Latin text and English translation found at the link just given for Carpini is from Haklyut's collection of travel narratives and appears to be a more autobiographical account of his mission, perhaps related to C. de Bridia's variant version, which is possibly based on lectures by Carpini (see the Wikipedia article on Ystoria Mongolorum)   Carpini's  own text of Ystoria Mongolorum, which is mainly a descriptive account on the Mongol Empire, is available on Zurich University; s `Corpus Corporum' pages.  Also to be added to sina_latina_trans.doc is Francis Pipino, who produced a Latin version of Marco Polo's memoirs, censoring out some of the racier detail but also probably recording the transcription of some place names more accurately. Pipino's text does not appear yet to have been put on line but a preview of an English translation is available on Amazon .

The second word document includes key extracts from David Morgan's article followed by a separate translation of these instead of the interlinear glossing use in the first document. This was prepared as a handout for a Circulus Latinus meeting in August 2013.

Download File
A major but under-used aid to the history of the Chinese rites  controversy, which came to a head in the early 18th century,  is the German Jesuit  Killian Stumpf's Acta Pekinensia, focussing principally on the 1705-171o mission of papal legate Charles Maillard de Tournon to the emperor Kangxi. This document, written in Latin with material in Chinese and modern western languages interspersed, is preserved in the Jesuit archives in Rome but has never been published in full. An annotated English translation is now being prepared for the Macao Ricci Institute and  an introduction to the document is provided by the director of the translation project, Paul Rule, in the pdf below.

Download File
For a general history of the `Silk Road', the ancient trade route which provided the main link between China and Europe till replaced by maritime trade in early modern times, see Xinru Liu's book The Silk Road in World History, which can be previewed on the Amazon site.   A recent book in Chinese on different travellers' to China from the West is Zhang Qian Yi's 西行找中國, published in Hong Kong by Cosmos Books.  An RTHK programme on the book is currently (August 2014) available for download here and there is an interview with the author in Chinese on another site  with an English translation available in this file:

Download File
Recent research has suggested that large stretches of the Silk Road itself may have originated in routes traversed by pastoralists in search of summer grazing for their animals. See the summary of the work by anthropologist Michael Frachetti and colleagues on the Washington University site.
​
There is a very detailed, and seemingly reliable  survey of links between the Roman and Chinese empires at en.wikipedia.org/wiki/Sino-Roman_relations  Another essay on Roman-Chinese links, with particular emphasis on the silk trade, written by Jason Freewalt,  a graduate student at the American Military University, can be downloaded here:

Download File
A comparative study by Filippo Marsili of Polybius, the Greek historian of Rome's rise to predominance in the Mediterranean world, and of Sima Qian,  his near-contemporary and pre-eminent historian of the unification of the Chinese world,  was published in Fragments, vol. 3 (2013-2014), pp 43-77.  He argues that neither man saw any divine, moral purpose behind the two processes. The article, together with a reaction form Srilata Raman,  can be downloaded here:

Download File
Michale Puett's essay comparing the use of religion to legitimise imperial rule in both ancient China (his main focus) and the Roman Empire, which is included in Walter Scheidel (ed.) State Power in Ancient China and Rome (Oxford University Press, 2015) can also be previewed here:

Download File
A Spanish-language article, Myth and Reality in the Descriptions of the Roman Empire in Chinese Sources, covers the period from 206 B.C. to 907 A.D.

André Bueno's `Roman Views of the Chinese in Antiquity' (Sino-Platonic Papers, n.261, May 2016) presents an extensive survey of the sources, concluding that the Romans, whilst regarding the Chinese as `barbarians' and also getting many of the facts wrong, regarded Chinese civilisation with respect and did not see it as a threat.  His many quotations include one from the 2nd. century Greek writer Lucan, who suggested that the Chinese lived up to 300 years and possibly subsisted on water alone!

Download File
There is a survey of the evidence for early contacts between China and the outside world in Francis Allard's “Globalization at the Crossroads. The Case of Southeast China during the Pre- and Early Imperial Period” (in The Routledge Handbook of Archaeology and Globalization, 2016).

Raoul McLaughlin has reserached extensively on the Eastern trade contacts of the Roman Empire and has a video on YouTube outlining the Han Empire's knowledge or Rome in the 1st century A.D.and the abortive mission of Gan Ying (甘英) in 97 A.D., which is also highlighted in the SINA LATINA Powerpoint available from this page.
McLaughlin's 2010 book, Rome and the Distant East: Trade Routes to the ancient lands of Arabia, India and China
based on his  2006 Ph. D dissertation, includes a thorough survey of the ancient primary sources and of scholarly work on  this topic. The book may now be difficult to obtain but he has recently published The Roman Empire and the Silk Routes: The Ancient World Economy and the Empires of Parthia, Central Asia and Han China (2016) and he covers South Asia in his 2014 volume, The Roman Empire and the Indian Ocean: Rome’s Dealings with the Ancient Kingdoms of India, Africa and Arabia (2014). His work is certainly an important contribution, though the claim that Rome obtained one third of its revenue from taxing trade with the East has been challenged.

Another recent surveyof the contacts between ancient Rome and China is Ann Kolb and Michael Speidel's `Imperial Rome and China: Communication and Information Transmission', a chapter in China’s Development from a Global Perspective,  edited by María Dolores Elizalde and Wang Jianlang

Download File
The history of Latin in China, mainly in the context of its use as a chanel for the reception of Greek philosophical works, is breifly discussed in this article from a Spanish journal (`A new Chinese Textbook of Ancient Greek; with a Historical Outline of teaching Greek and Latin in China',   Thamyris, n.s. 9 (2018), 173-212):

Download File
The theory that Roman legionaries cptured by the Parthians in 53 B.C. ended up in Gansu and founded the village of Liquian, mentioned in the SINA LATINA PowerPoint at the top of this page, is discussed with healthy scepticism in Paddy Lambert's essay on the Heritage Daily site.
The first formal agreement on the border between China and Russia, the Treaty of Nerchinsk of 1689, was intially drawn up in Latin and original text is available here.