QUESTIONS ARISING FROM 80th. MEETING – 7/7/17
(the record of earlier meetings can be downloaded from the main Circulus page as can the version of Ciceronis Filius with illustrations added. The illustrated text of Genesis is available on the Genesis page)

Stella mentioned that this year was the 20th anniversary not only of the establishment of the Hong Kong SAR but also of the publication of the first novel in the Harry Potter series, which Stella herself had celebrated by purchasing the Latin version: Harrius Potter et Philosophi Lapis. The translator, Peter Needham, who confessed to not having read any of the books before he got the job, had previously taught Latin at Eton College. Needham later translated the second novel, Harrius Potter et Camerra Secretorum. There is in fact a well-established tradition of producing Latin versions of classic children’s stories, examples including Winnie Ille Pu and Alicia in Terra Mirabili and J.K. Rowling, who herself studied the language up to the end of her first year of university, was keen to have some of her own work similarly treated. John mentioned that the first Harry Potter book has also been brought out in Ancient Greek but confessed that, though he had had this on his shelves for many years, he was yet to read it through.
There was a question about the Latin translation of the Harry Potter spells. John explained that many of these are in Latin to start with so don’t need any change – for example acciō (`I send for’ – the summoning charm), cruciātus (`torture’ – one of the three `Unforgivable Curses’) and expectō patrōnum (`I await my patron’ – the spell that brings a magical protector – in Harry’s case a stag - out of the end of a wand. We were not sure, without consulting the texts themselves, whether any non-standard linguistic features in other spells were `corrected’ in Needham’s Latin translation.

Mention was also made of the 10th anniversary of the invention of the i-phone, whose advent was announced by Steve Jobs in 2007 (https://en.wikipedia.org/wiki/History_of_iPhone).  This led to brief discussion of `Moore’s Law’, the observation made by Gordon Moore in 1965 that the number of transistors that could be packed into a single integrated circuit (and thus the speed of the chip) was doubling every year. There is some controversy at the moment over whether this `Law’ still holds (see https://en.wikipedia.org/wiki/Moore%27s_law) and Moore himself has acknowledged that it cannot continue to do so indefinitely. Still on the electronic front, it was noted that YouTube had been an independent company later acquired by Google.

Zhng Wei was continuing to follow Swarthmore College’s on-line reading of Abelard’s Historia Calamitatum, a text he said was interesting but quite difficult. For details, see the record of our June meeting.

Jeanne mentioned Neville Sarony, a barrister and former professor of law at City University, who is married to a Nepali (the younger sister of his first wife who died some years ago) and is the author of one autobiographical volume (Counsel in the Clouds), focussing on Nepal in the 1960s, and two thrillers set in Nepal – The Dharma Expedient and Devlin’s Chakra. The second novel was recently launched in Hong Kong (see https://www.ticketflap.com/neville-sarony). He is in addition a trustee of the Nepal Umbrella Foundation, an NGO that helps protect Nepalese children from traffickers (see http://umbrellanepal.org/) John corresponded with him briefly in 2015 but they have not yet managed to meet up.

We also touched on theories about the afterlife, including the Chinese concept of `Hell number 18’, the place where the worst offenders end up. This would correspond to the pit at the centre of Hell in Dante’s inferno, where, in line with medieval Christianity’s decidedly politically incorrect notions, Mohammed is continually cleft in two.

John learned that, when drumming his fingers on the table to acknowledge somebody’s pouring tea (or wine) for him, he should keep all the fingers together rather than tapping them separately! The practice, as is well-known, is said to have originated from an incognito journey to southern China by an emperor, whose accompanying courtiers, unable to bow properly and thus reveal his identity, had instead to kowtow with their fingers.

There was another brief discussion on the enormous number of mainlanders visiting HK annually – now around 43 million – and on the effect on the property market of mainland money.

Ths led to the topic of linguistic differences within China and the fact that Putonghua could be regarded as Beijing dialect, shorn of the peculiarities of the latter (particularly the notorious `r’) which make it difficult for people from other provinces to pronounce. Jeanne remembered how her father, claimed never to speak `Putonghua’, but only the
Kuomintang’s guoyu (Cantonese `Gwokyu’ – the term employed at Kiangsu-Chekiang College in Kwai Chung when John taught there in the 1980s). In fact the two were virtually the same thing, and also little different from guanhua (`official language’, i.e. `Mandarin’), the pan-Chinese lingua franca employed before the 1911 Revolution. Twenty years ago, John wrote a now-partly out-dated essay on the evolving relationship between Cantonese and the national language – `The Future of Cantonese: Current Trends’, which can be downloaded from http://hkjo.lib.hku.hk/archive/files/4f2b75239ff867ce521ae391d01eacb9.pdf

We compared the origins of Putonghua with that of Hindi and Urdu, national languages of India and Pakistani,which were also based on the speech variety found near the centre of political power – in the South Asian case, Delhi and the region to the west of it. Hindi and Urdu are virtually identical at the colloquial level but diverge in thir more literary registers because the former borrows from classical Sanskrit and the latter from Arabic and Persian.In written form they appear totally different because Hindi, like Nepali, is written in the Devanagari syllabary and Urdu in the Persi-Arabic script. The name `Hindustani’ is often felt to have colonial overtones but it is still useful as a neutral label for the common core of the two national languages. This is sufficiently close to the major regional languages of north India, Pakistan, Bangladesh, Nepal and Afghanistan to be very easily acquired by their speakers, a feature which helps explain the popularity of `Bollywood’ (Hindi movies) throughout this wider area. 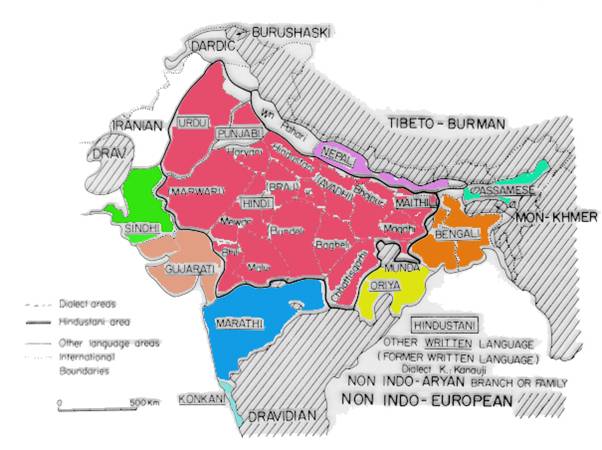 We considered the tendency in Hong Kong, south Asia and many other places for those with some knowledge of English to pepper their own langage with phrses taken from it. John recalled overhearing two Chinese hikers discussing what route to take and one of them saying `Mouh dahk biht(冇特別) preference.’ (`I have no special preference’). Similarly, Nepalis frequently use an English loan word rather than the formal terms found in literary Nepali. Thus a newspaper might use the Sanskrit word prahari for `police’ but in colloquial Nepali it would almost invariably be polis.

The text of Genesis chapters 7 and 8, shich we read aloud and answered questions on, is given below

NOTES
[1] The Hebrew ramesh usually means `creeping’ or `crawling’ and the Septuagint’s herpeton something slow-moving, so the reference is presumably to reptiles so KJV (`creeping thing’) is accurate and Jerome’s omne quod movēbātur too general.
[2] ūniversae avēs, omnēsque volucrēs: Jerome uses to words for `birds’whereas the Hebrew is literally `birds of every sort’

NOTES
[1] recordor (1), like meminī and oblīvīscor, normally takes a genitive object.
[2] KJV, as usual more faithful to the original Hebrew, says the waters `returned continually’. Jerome’s euntēs et redeuntēs perhaps refers to rain’s normal feature of stopping and starting again, or to the waters flowing this way and that as they receded.
[3] The Hebrew and Vulgate have `Ararat’ (corresponding to the the Assyrian Uratu), which referred to the whole region between the Araxes River and Lake Van (the kingdom of Urartu covered a wider area – see the map). Mt Ararat (16, 254 feet), which is in modern Turkey, is the highest of the area’s many peaks.
[4] The subjunctive siccārentur is used as the reference is to the purpose or expectation in the bord’s (or Noah’s) mind. Whether the bird eventually returned is left open.
[5] cessāssent: contraction of pluperfect subjunctive cessāvissent. The normal meaning of cessō (1) is `cease’, `stop’.
[6] The very common classical idion of using a passive perefect particple instead of a finite verb for the first of two actions done to the same object: [columbam] apprehēnsam intulit = apprehendit et intulit.
[7] Ablative absolute (literally `with another further seven days having been further waited for’)

NOTES
[1] The imperative ingrediminī mistranslates the Hebrew saw-ratsu, which means`in order to breed abundantly’ (see the KJV) not `go into!’
[2] altar(e) (-is, n) and altārium(-ī n) are found in singular forms only in post-classical Latin. Earlier there was only the plural altāria, -ium n..