QUESTIONS ARISING FROM 78th. MEETING – 26/5/17
(the record of earlier meetings can be downloaded from the main Circulus page as can the version of Ciceronis Filius with illustrations added. The illustrated text of Genesis is available on the Genesis page)

​Food consumed included urtica marīna (海蜇, jelly fish) with carō assa (roast meat), viz . gallinācea (chicken), porcīna (pork), and anatīna (duck) and daufum anūs maculātae (mapodaufu or `pock-marked old woman’s daufu’; see the record for the March meeting for other possible terms for this dish ). This was accompanied as usual by orӯza (rice – this English word derives from the Latin which in turn probably comes from Sanskrit vrīhi and perhaps ultimately from a Dravidian term for the grain).  Because the City Chinese Restaurant’s management have still not applied for an alcohol licence, we again supplied our own vīnum rubrum (or sanguineum, literally bloody). Also on the menu was melanogēna (eggplant) and lōligo (lōligonis f. cuttle-fish – the Romans used the same word for squid) in farīnā lacte ōvīsque commixtā (flour mixed with milk and eggs, i.e. batter).

Still on the topic of food, it was mentioned that fungi were, genetically speaking, more similar to humans than they were to vegetables (holera). Whilst fungus refers to fungus or mushrooms generally, and is also slang for `idiot’, the term bōlētus denotes a top-quality mushroom, such as those allegedly used by Agrippina to despatch her husband Claudius.

Zhang Wei reported that Swarthmore College was again providing an on-line medieval Latin reading summer course, this time using Peter Abelard’s autobiography, Historia Calamitatum. Abelard (1079-1142), originally from Britanny in NE France, was a philosopher and theologian and one of the pioneers of scholasticism, a movement which sought to give a rational foundation to Christian doctrine hitherto accepted of faith alone. Abelard was a controversial figure in his time, both because of his famous relationship with Heloise and also because of his teachings which almost resulted in his excommunication for heresy (see https://en.wikipedia.org/wiki/Peter_Abelard) To follow the summer course, which will be held on Tuesdaysg from 6 June, people need to join the Google+ community "Medieval Latin (Summer 2017): Abelard". Those wanting to participate in translating will need to download the Zoom conferencing system. See https://sites.google.com/a/swarthmore.edu/medieval-latin-summer-2013-the-gesta-francorum/ for instructions. The text of Historia Calamitatum is already available for download from this site though not yet the recordings. 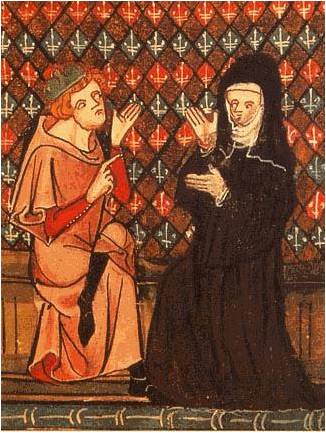 Abelard and Heloise depicted in a 14th century manuscript of the French poem Roman de la Rose
​Eugene also mentioned St Albertus Magnus (1200-1280), another major figure in rthe development of scholasticism and, like the best-known scholastic of all, St Thomas Aquinas, a member of the Dominican Order. Details of his life and work are at https://en.wikipedia.org/wiki/Albertus_Magnus

We read and translated chapters 2 and 3 of Genesis in the Clementine Vulgate (see the text below), noting the usual mistakes in John’s macroned version.

We noted the use of the verb pōtāre (drink), used in pre-classical and post-Augustan literature as a synonym for the fully classical bibere,but sometimes also having the sense of drink to excess or become intoxicated . Its perfect participle could be used both with passive and active sense, the latter illustrated by Cicero’s phrase domum bene pōtus redīre (`to come home well-oiled’). The verb is the source of English potable and itself comes from the Indo-European root *po(i)-.  It is etymologically linked with poculum (drinking-vessel) though not with Greek potamos (`river’; cf. `hippopotamus’, `Mesopotamia’), which probably derives from the PIE root *pet ( `rush, fly’) and thus meant originally `rushing water’.


We also commented on the plural form diī (gods), an alternative to deī and dī which were more common in classical Latin, where (especially in poetry) dīs instead of deīs (dative/ablative plural) and deum for deōrum (genitive plural) were also frequent. Yet another peculiarity was the phraae morte moriēris (`you will die by death’) used by Jerome to translate a Hebrew phrase which seems to have combined two different verbs meaning `die’.  Tanya suggested  parallel in children’s language which could include things like `I’ll kill you to death’. She went on to mention two
whimsical works by Mark Twain, The Diary of Adam and Eve, and the longer Diary of Eve available on the web at
http://www.kelleytown.com/shared%20files/adam%20and%20eve.pdf
and https://www.gutenberg.org/files/8525/8525-h/8525-h.htm

We noticed also how God seems to be portrayed at one point as a jealous, insecure creature, worried that Adam quasi ūnus ex nōbīs factus est, sciēns bonum et malum (`has become like one of us, knowing good nd evil’) and therefore determined to deny him access to the `Tree of Life’ which would let him live for ever.

Although we are using the Clementine (16th century) edition of Jerome’s 4th century Vulgate translation, the Catholic Church under Pope Paul VI commissioned a revised version which was finally completed under John-Paul II in 1999 and is available on-line at http://www.vatican.va/archive/bible/nova_vulgata/documents/nova-vulgata_index_lt.html
On a quick glance, there are few differences between the two versions in the chapters we read today but one change is from the feminine ipsa to neuter ipsum in 3.15 so that it is sēmen (a neuter noun including descendants of both sexes) rather than `the woman’ (mulierem) who is to crush the serpent’s head. In the Hebrew text, the pronoun could refer to either noun but most translators use a neuter or masculine pronoun, making the reference either to humanity in general or to Christ. The Catholics appear to have come into line, abandoning their traditional belief that God was here prophesising the future role of the Virgin Mary in the final defeat of the Devil.

NOTES
[1] The choice of the word virāgō seems to have been determined by its similarity to vir, not by the wish to emphasise Eve’s heroic qualities. The Hebrew simply means `woman’. The Greek also uses the usual word gunē
[2] serpēns (literally `crawler’) is the present participle of serpō (-ere, serpsī, crawl) used as a feminine noun. The other common word for snake is dracō (dracōnis, m)
[3] quae is neuter plural, referring to animantibus rather than terrae,
[4] ad mulierem: this alternative for the dative mulierī was permissible in Jerome’s time but not in the literary language of Cicero’s time.
[5] moriāmur: imperfect (morerēmur) rather than present subjunctive would be more normal here as the preceding subjunctives comederēmus and tangerēmus are imperfects. The switch from secondary sequence (use of imperfect or pluperfect subjunctive after a past tense main verb) to primary is presumably to make the possibility of death more vivid.
[6] cum, as usual when used as a conjunction, could be translated as both `since’ and `when’.
[7] audīssent: contraction of pluperfect subjunctive audīvissent.

NOTES
[1] nē…aeternum:. `let it not chance to happen that…. he takes also from the tree of life and eats {its fruit} and lives for ever.’
[2] cherubim: plural of cherub with the original Hebrew termination. The present-day image of a cherub as a cute little boy with wings results from a confusion with the Graeco-Roman Cupīdō/Erōs. The cherub of the Old Testament was a powerful figure, generally thought of as having one face and four feet, but in the Book of Ezechiel possessing four faces (of a man, ox, lion and eagle).  See https://en.wikipedia.org/wiki/Cherub
[3] versātilem: this adjective is also qualifying gladium: `a sword which flamed and turned every way.’
[4] ad custōdiendam viam: gerundive phrase (`for the purpose of the way being guarded’, i.e `to guard the way’)