We read chapter 15 of Henry Nutting’s Ad Alpēs: a Tale of Roman Life, originally published in 1923 and recently re-issued recently by Daniel Pettersson (see his Latinitium site to order a copy). The text of the 1927 edition, with interlinear translation and illustrations, is being added progressively to
https://linguae.weebly.com/ad-alpes.html and has now reached chapter 17. The plain text and translation of chapter 15 have also been placed below. Within a frame narrative of a family travelling from Ephesus in Asia Minor to the Alps, via Brundisium and Rome, the book includes a plethora of stories from Roman history, Greek mythology and the Old Testament, 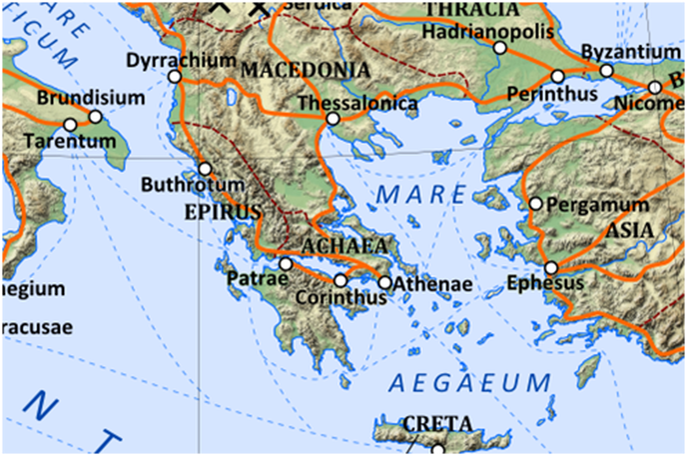 The first stage of the family’s journey in Ad Alpēs

As the chapter is set in an Italian inn, we also looked at the tombstone inscription which a real innkeeper designed for himself and his partner and which has been discussed and translated by Mary Beard. The couple called themselves Lucius Calidius Eroticus and Fannia Voluptas, names which Dame Mary renders as `Mr Hot Sex’ and `Madame Gorgeous’

In the story itself, a peddlar and the family’s rascally slave Stasimus quarrel with each other and both use the term nūgātor,which derives from nūgae (jokes, trifles) and for which Lewis & Short offers a wide range of translations: jester, joker, babbler, trifler, silly person braggart, swaggerer. John suggested `bullshitter’ as a good equivalent in modern, colloquial English.This led us to a brief discussion of other Roman insults, many of which, were, of course, obscene. There is a selection of such terms at http://www.obscure.org/obscene-latin/vocabulary.html and John has a longer list which. The standard reference for this topic is, as noted in earlier meetings, James Adam’s comprehensive account, available for download at  https://monoskop.org/images/7/79/Adams_JN_The_Latin_Sexual_Vocabulary.pdf We also noted Stasimus’s use of the words Discēde in maximam malam crucem (literally `Go off to a very big bad cross’), a slight variation on a phrase used by the playwright Plautus, In everyday speech, probably abī in malam rem or abī in malam crucem were more common. When discussing British politics, John generally employs Abeant Brexitōrēs in malam rem, idiomatically `To hell with the Brexiteers’. A recent pro-Europe demonstration featured Boris futue tē ipsum, directed at the UK’s esteemed prime minister. 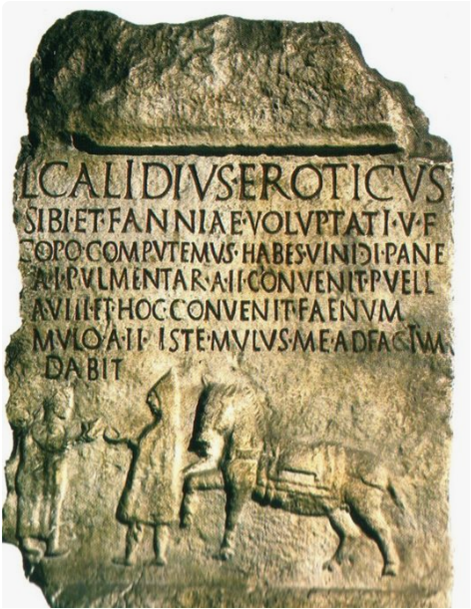 ​​Someone asked if there was any difference between the verbs properō and festīnō It transpires that Cato the Elder (234-149 B.C.) asserted that there was:: aliud est properāre, aliud festīnāre. Quī ūnum quid matūre trānsigit, is properat: qui multa simul incipit neque perficit, is festīnat (`Properāre is one thing, festīnāre another (` Properāre means to accomplish one thing in good time, festīnāre is to start many things at once and not finish them’). However, the 2nd. century A.D. writer Aulus Gellius, whose miscellany Noctēs Atticae (`Attic Nights) (16, 14, 2), preserves the saying, claims that they were in fact used interchangeably.

We also asked whether the verb gustō, which most of us learned as `taste’, can also mean `eat’, which is how it appeared to be used in the chapter. It turns out that gustō means basically `eat just a little’, so it covers both `taste’ in the English sense as well as `eat a light meal’, The Romans normally ate a large meal in the evening (cēna), whilst ientāculum (`breakfast’) and prandium were not at all substantial, so Nutting can correctly use gustō of the family having a bite to eat before setting off in the morning.   Similarly the noun gustātio means literally `a tasting’ but it was also used of a light first dish as part of a larger meal.

Someone also asked whether ēheu and heu were synonyms. Both were in fact used as exclamations of pain or grief, the shorter word being apparently more common.

There was a brief discussion of the controversial ding right policy under which male indigenous villagers were entitled to build a `small house’ without paying the usual hefty fees involved. Although linked to supposed practice before Britian acquired the lease on the New Territories in 1898, the present system dates back to legislation passed in 1972. In may this year, a court decided that the practice was constitutional if applied to privately owned land but not for public land. Both supporters and opponents of the system are dissatisfied with the compromise and the situation is complicated because the organization representing the indigenous inhabitants of the New Territories, the Heung Yee Kok, has been assiduously cosying up to the authorities in Beijing since the 1980s. The details are explained in an article at https://www.scmp.com/news/hong-kong/law-and-crime/article/3008261/battle-over-hong-kongs-controversial-small-house 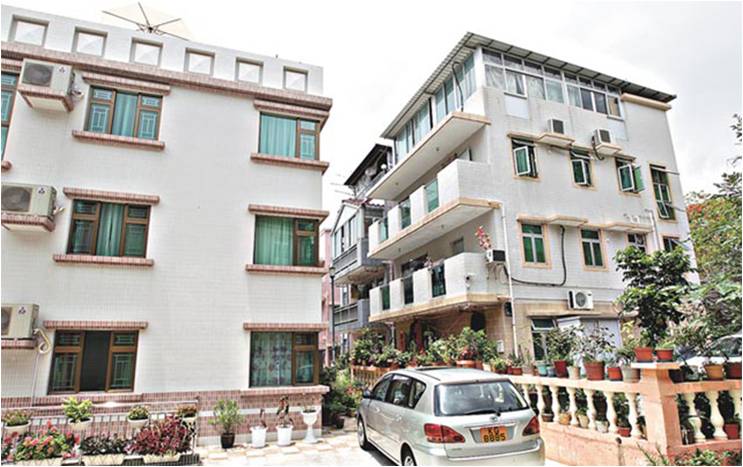 There was also brief discussion of the notions of ethnicity and nationality in China. An article published in the economist in 2016 argues that most Chinese virtually equate Han ethnicity with Chinese nationality, creating possible problems both because of the exclusionary consequence for  non-Han within China and because of the implicit claim that the Chinese diaspora remain Chinese in a political sense, see `Who is Chinese? The upper Han’ https://www.economist.com/briefing/2016/11/19/the-upper-han. The article may be behind a pay-wall but John can provide a copy on request.

Finally, Valerie confirmed thart the only British Latin GCSE equivalent that can be taken in Hong Kong is the Cambridge IGCSE. She also said that Eton and Winchester have now discontinued the policy of having their top sets take the more difficult IGCSE exam rather than OCR. The former’s syllabus covers a wider grammatical range and the extracts from original Latin literature to be studied are longer.

NOTES
[1] occurrro (-ere, occurrī, occursum), literally `run into’, is regularly used with the dative for accidentally meeting people
[2] As this is an interrogative adjuctive qualifying homō, quī rather than quis would be nore normal,
[3] furcifer is literally `gallows carrier’, a reference to the practice of making condemned criminals carry the instrument of their own execution.

NOTES
[1] Literally `cuts.’ The whip regularly broke the victim’s skin.
[2] carnifex, the regular word for `executioner’, is literally `meat-maker’.
[3] abī in malam crucem (`get yourself hung’, `go to hell’) was a common insult

NOTE
[1] https://www.eagle-network.eu/story/roman-inns-are-not-for-free/  An innkeeper in the 2nd. century A.D. had this tongue-in-cheek gravestone made for himself and his wife. Dame Mary Beard playfully suggests `Mr Hot Sex’ and `Madame Gorgeous’ as English equivalents for the couple’s names (Lucius Calidius Eroticus and Fannia Voluptas). Her free translation of the dialogue: -
-- Innkeeper! Let’s work out the bill!
– You’ve had a sextarius [one pint] of wine, and bread: one as. Relish, two asses.
– Okay.
– The girl, eight asses.
– That’s okay too.
– Hay for the mule, two asses.
– That bloody mule will be the ruin of me.