QUESTIONS ARISING FROM 75th. MEETING – 24/2/17
(the record of earlier meetings can be downloaded from the main Circulus page as can the version of Ciceronis Filius with illustrations added)

A large South Asian party descended on the restaurant for a buffet meal whilst we were there but finished and left rapidly. To misquote Julius Caesar, a definite case of vēnērunt, ēdērunt, ēvanuērunt (`They came, they ate, they vanished’).

Conversation turned again to member’s travels, including Zhang Wei’s Chinese New Year trip to Spain, where he visited Cordoba, Granada and Santa Fe. Granada was the capital of the Moorish kingdom of Andalusia and Santa Ffe the small town first built as part of the final Spanish campaign to reconquer the region. It was also the site where the agreement was made between Columbus and  the `Catholic monarchs (Isabelle and Ferdinand) that laid the foundation for Spanish colonization of the Americas. The fall of Granada and Colombus’s landing in the Bahamas both took place in 1492.  , 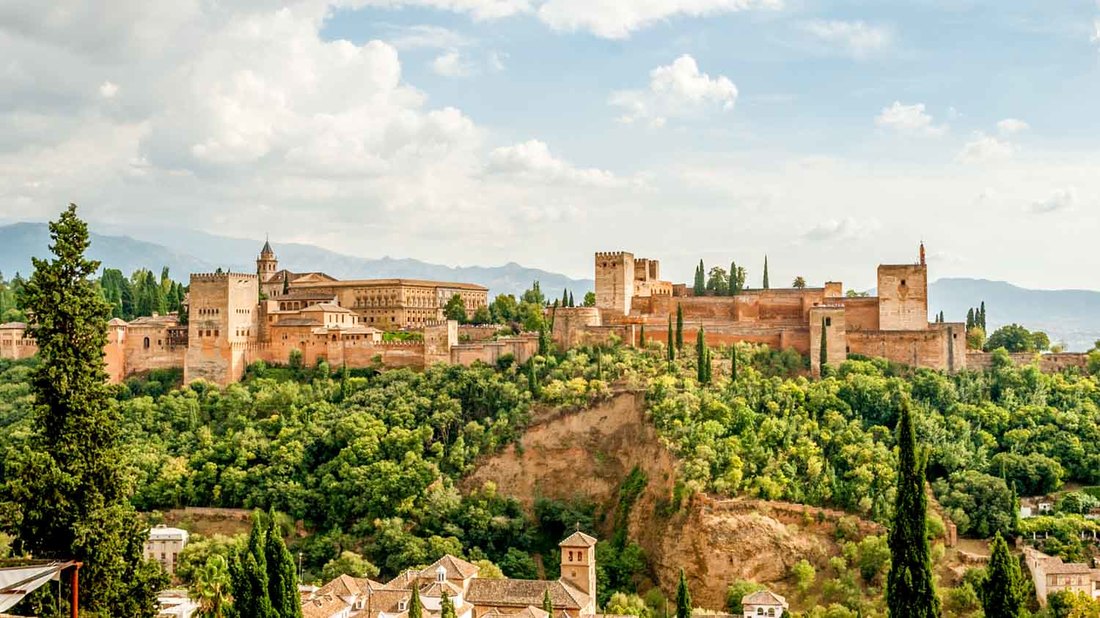 The Alhambra at Granada: https://www.getyourguide.com/alhambra-l2772/

Pat, recently returned from the Caucasus, mentioned the reputation of Armenian brandy, which, unfortunately, cannot be brought away by tourists. This had apparently been greatly praised by Winston Churchill when offered it by Stalin at the Yalta conference and the Armenians allegedly sent him a number of bottles each year for the rest of his life  –  200 according to the version Pat heard but Wikipedia: https://en.wikipedia.org/wiki/ArArAt_(brandy) , which describes the story as `undocumented, gives a figure of 400.

Mention of Churchill prompted Chris and John to remember two other anecdotes. He is said once to have been accosted in the House of Commons bar by Bessie Braddock, a famous, amply proportioned Labour M.P., with the words `Winston, you’re drunk!’, to which he ungallantly replied, `Bessie, you’re ugly, and in the morning I shall be sober!’ On a considerably earlier occasion, Churchill received two complimentary tickets from Bernard Shaw for the opening night of his latest play. Sham added the message `For you and a friend – if you have one’, to which Churchill replied `Regret I cannot make the first night. Will come to the second night – if you have one.’

The region said to produce the best grapes for Armenian brandy production is around Van, formerly an important centre of Armenian culture but subject to ethnic cleansing under the Ottoman Empire and now part of Turkey. We were unsure whether this episode took place in the 19th century or during World War I but it appears that it was the latter date and that it formed part of the  wider `Armenian Genocide’ that has been the subject of so much controversy between Turkey and other countires in recent years. One dispute is whether atrocities against the Armenian population were a response to its collaboration with the Ottoman Empire’s Riussian enemies or whether the rebellion was itself triggered by earlier Turkish repression. See for more details https://en.wikipedia.org/wiki/Van,_Turkey .  The city of Van stands on the lake of the same name and Kurds now form the majority of the population. 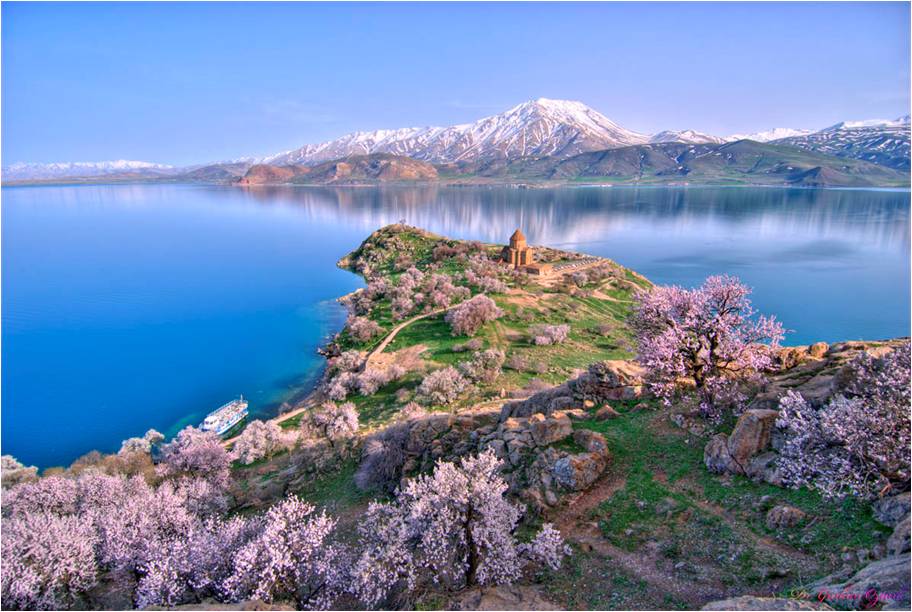 We discussed the etymological connection between the words whole and holy , both of which seem to derive from a Proto-Indo-European root *koilos (whole, complete, which is also reflected in the word health.). The phonetic similarity wih hole is merely coincidental, as this is connected to another PIE root, *kel (hide, conceal). The most authoritative reference for this kind of query is the full edition of the Oxford English Dictionary but the on-line version is behind a pay-wall (unless you have membership of a university library) and the freely available www.etymonline.com  is normally reliable enough.

Before the start of the meeting proper, Pat and John discussed the words pӯthō (-ōnis, m) and ariolus (-ī m) in II Kings 23: 24, which refers to Josiah’s elimination of idolatrous practices on becoming king of Judaea:

The first word is used in Late Latin for the demon (or `familiar spirit’) that possesses the body of a soothsayer, whilst ariolus, more often written as hariolus means a prophet or soothsayer. The original Hebrew terms (which are conveniently given as glosses to the text of the King James English version on the `Polyglot Bible’ site) mean `bottle’ or `familiar spirit’ and `wizard’ respectively. Possibly pӯthō is connected with Pythia, the title of the priestess at Delphi who was supposedly possessed by the god Apollo.

There was a brief discussion of homosexuality in the ancient world, beginning with the relationship between Achilles and Patroclus in the Iliad. John linked the prevalence and acceptability of this to the difficulty of access to women of one’s own social class, something that was probably more pronounced at Athens than at Rome. This was also certainly a factor in some more conservative societies today, for example in Afghanistan.. We had in previous meetings noted that, for the Romans, there was no stigma against being the active partner in such a relationship but there was a strong one agains accepting the passive role as a pathicus, and for this reason gay sex between serving legionatries was a capital offence.

Chris noted the prevalence of the double entendre in Voltaire’s Candide including the reference to Dr. Pangloss giving a prolonged `lesson in physiology’ to a young girl who returned home `full of enthusiasm for science.’ Coming right up-to-date, Chris mentioned in addition that he was himself a remote relative of Nobel laureate, J.M.Coetzee, probably the living author with the greatest number ofprestigious awards under his belt. Still in the realm of high culture, Chris, who has authored learner’s manuals on several musical instruments, highly recommended Anna Russell’s parody-summary of the plot of Wagner’s `Ring’ cycle: https://www.youtube.com/watch?v=07E5sLsJQe0

Chris aso recalled the highly stressful experience of giving a lesson in basic Korean to other foreigners whilst being observed by native speakers of the language. John had suffered similarly when in London he had given an elementary Nepali lesson to a British Council employee in the presence of a young Nepali he had only just met. John’s anxiety was not so much fear that he would make a mistake – he had previously been frank with the student on his own limitations – but rather that he would not be able to understand the native speaker’s explaining in Nepali what the mistakes were. Luckily, the observer only commented on the way he had written one character of the Devanagari script and, though he didn’t fully understand what was being said, he was able to guess correctly what the problem was!  One great advantage of Latin, of course, is that, since all the native speakers are conveniently dead, we need not fear embarrassment.

We are also relatively safe when teaching our native language, but regional differences in pronunciation from the dictionary standard remain a pitfall. When giving a phonetics lesson to Nepali school teachers, John unthinkingly transcribed on the board his own Nottingham pronunciation of `path’ (with the vowel of cat’ rather than `part’) and was instantly corrected by a young man in a Nehru jacket. Northern `mistakes’ in fact generally represent earlier pronunciations which have changed more radically in the English of southern Britain: Henry V addressing his troops at Agincourt would have sounded more like a Yorkshire coal miner than Elizabeth II. Pat (who is from Somerset) pointed out that early pronunciations are also preserved in some southern dialects.

John had recently seen a short article on literary portrayals of Thomas More and his antagonist, Thomas Cromwell. Robert Bolt’s play `A Man for All Seasons’, made into a film in the 1960s, makes More into a noble idealist and Cromwell an unprincipled schemer, whilst Hilary Mantel’s book Wolf Hall makes More the villain and casts Cromwell in a more favourable light..The article suggests that neither man deserves idealization and that Mantel may have been influenced by reaction against her own Catholic upbringing. There is no doubt that More, eventually executed for upholding his own Cathoic beliefs, had previously been an enthusiastic persecutor of `heretics’, at least two of whom had been burned at the stake whilst he was Lord Chancellor. Pat pointed out, however, that Cromwell was no idealist. The article is at http://www.historytoday.com/paul-lay/no-more-heroes-thomas-cromwell-and-thomas-more and Hilary Mantel’s own response at http://www.historytoday.com/hilary-mantel/hilary-mantel-thomas-more.

Whatver the truth in all this, `A Man for All Seasons’ is a very fine film and also has one short scene in Latin, where Henry VIII attempts to test Margaret More’s scholarship, only to rapidly retreat into English and the topic of dancing when he realizes he is no match for her. See http://linguae.weebly.com/latin--greek.html for the scene, with transcript and translation, whilst More’s Latin treatise Utopia, which, with the exception of Isaac Newton’s Principia Mathmatica Naturalis Philosophiae and Darwin’s Origin of Species, is arguably the most influential book ever published in Britain in any language, is briefly discussed at http://linguae.weebly.com/circulus-latinus-honcongensis.html

We read as usual six sections of Ciceronis Filius see the text below), discovering in the process the usual crop of vowel length mistakes. In John’s defence, the profound words of N.R.R. Oulton can be cited:

`It is a brave man who inserts a macron over a vowel in a book which is to be read outside his immediate family. Or
chooses not to do so, for that matter. Just think of the hoots of derision that will be heard, ringing through the
countryside, as the errors are spotted and chortled over,’
(So you Really Want to Learn Latin, Bk 1, pg. 101)

The first part of the extract dealt with Roman writing materials and Pat pointed out that tabulae (wooden trays containing wax in which characters were incised) remained in use well into the Middle Ages. Papyrus, also frequently employed in the ancient world, remained important down to the 7th century. Paper, which in its modern form is a Chinese invention, was introduced into Spain in the 11th century but not adopted fully throughout Europe until  the  14th.  See for details the article at https://en.wikipedia.org/wiki/History_of_paper

The book also mentioned the use of minium (either cinnabar or the less expensive red lead) as a red pigment. This continued in use in the Middle ages, particularly for decorative work in literary manuscripts, and the modern word `miniature’ (for a small-scale painting) derives from the Latin word. Pat explained that cinnabar was also extensively used in traditional Chinese `chops’, which should be handled with care as the substance was highly poisonous.

Black ink was made from soot (fūlīgō) produced by burning pitch or resin. The word fūlīgō is cognate with fūmus (smoke) and has no connection with connection with fulgur (lightning, thunderbolt). The latter is the source for English `fulgurite’, hollow glass tubes produced by the action of lighning strikes on sand with high silica content. These etymological queries prompted someone to ask why Latin lūdus means both `play, game’ and `school.’ The semantic development seems to have been game > training > school and it should be noted that the term lūdus was normally used only for a primary school, though schola (a greek loan-word with the original meaning of `leisure’ could refer to schools for more advanced learning. With both lūdus and schola a fundamental idea may have been the contrast between practical activity geared directly to survival and leisure which could be devoted either to learning or to amusement.

Finally, we noted the reference in the last chapter of the extract to Cato the Elder (234-149 B.C.) the conservative statesman who opposed hellenization and called constantly for preventative war against Carthage.Chris, who had recently completed a dissertation on Cicero’s philosophical writng, pointed out that the orator always wrote very respectfully about this man, probably out of the wish to retain the support of his great-grandson, Cato the Younger (95-46 B.C.).